The government should abandon its net migration target and commit unequivocally to increasing the number of international students studying in British education institutions. 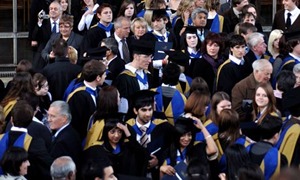 Alice Sachrajda is a research fellow at IPPR

Overseas students could be worth £12bn a year in higher education fees by 2020, according to analysis of Google search data, which shows international interest in British universities growing ten times faster than interest from within the UK.

This is positive news for the international education sector, but recent research from IPPR shows that the UK cannot rely heavily on its positive reputation alone if it wants to attract the brightest and best students to the UK’s education institutions.

For many years the UK has relied on its reputation as a world-leading education provider to attract international students from all over the world.

But now the global market in education is increasingly competitive. The UK needs to compete with more countries, and many are offering better incentives to attract international students. A recent survey of Indian nationals commissioned by IPPR, and carried out by Ipsos MORI, found that 91 per cent of respondents thought that the UK’s restrictions on the ability to work post-study would put off either ‘some’ or ‘most’ students.

In 2011 the Australian government introduced a series of measures to enhance the competitiveness of Australia’s international education sector with improved working rights for overseas students, both during and post study. These measures were introduced because a previously restrictive visa regime for international students was one of the key factors behind a dramatic plunge in overseas student numbers.

In May 2013, France’s higher education minister Geneviève Fioraso vowed to improve visa conditions and provide foreign students with free French language lessons. International students at French universities are now allowed to look for work for up to one year after they complete their studies allowing graduates from French business and engineering schools to stay on for work experience in France.

A recent IPPR report makes a series of recommendations to grow the sector, closer in line with its competitor countries. These include permitting all international students to work alongside their studies (to a maximum of 40 hours a fortnight) and allowing international students six months to find work in the UK after their studies (as long as they are vouched for by their institution) with this time frame increased to two years for PhD, MBA and STEM (science, technology, engineering and maths) graduates.

Instead, the government should abandon its net migration target and commit unequivocally to increasing the number of international students studying in British education institutions.