London and the South East will together receive three quarters of all transport investment in England in the years ahead. 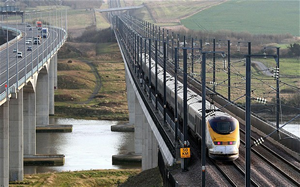 Ed Cox is director of IPPR North, he tweets as @edcox_ippr

The new National Infrastructure Plan unveiled yesterday includes £375bn investment in 646 different projects which are due to be built in the next 15-20 years and the promise of £25bn new spending by the insurance industry.

Before we get too excited, there is no new public spending and levels of infrastructure spending remain well below those in 2010 and continue to lag behind those competitor nations with whom we are apparently in a ‘global race’.

Where public spending is involved, nearly three quarters of the plan concerns transport projects; and it is amongst these that IPPR North has conducted a snapshot analysis, not least to test Danny Alexander’s assertion that the new plan cannot be characterised by a north/south divide. 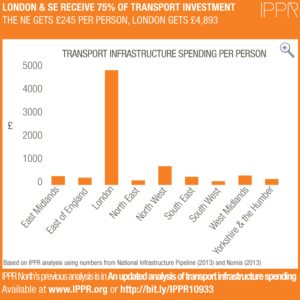 These figures represent a significant boost in every region in comparison to the last plan, but in London’s case per capita figures have nearly doubled, apparently as a result of £11bn investment in the Underground, but also a £1.5bn increase to Thameslink costs.

The Thameslink boost alone is equivalent to the whole of planned spending in Yorkshire and the Humber and more than double the total investment in the North East.

Critics will of course point out that London’s needs are very different to the rest of the country and that it somehow ‘deserves’ such disproportionate investment; but let us beware of lazy assumptions.

Some say Crossrail and Thameslink should not be considered as they ‘distort the regional figures’ – we can see no good methodological reason why they shouldn’t be included, they are regional transport projects.

Others claim that many London projects are used by non-residents.

This is true but ONS estimate that no more than one million non-residents use London’s transport system on any working day. Even if we were to assume that 5 million non-residents used London’s transport system on a regular basis throughout the year and we include them in London figures, then projected infrastructure spending per ‘transport user’ in London would still amount to more than £2000 – more than double any other region and still 8 times more than the North East.

And there is a further regional disparity which needs highlighting concerning progress. Nearly four out of five of all of London’s projects are ‘active programmes or ‘in construction’. This compares with just one third of those in the North West and half those in Yorkshire and Humber.

In other words, London’s construction programmes are that much further ahead bringing benefits sooner.

So why does this matter?

This is not just about fairness. The National Infrastructure Plan itself highlights the huge economic benefits of infrastructure investment both in terms of their construction value but also in the case of transport bringing connectivity and driving growth.

The Core Cities last week launched their ‘prospectus’ to maximise their economic potential for the nation, citing evidence that second tier cities are driving the recovery in other developed nations and claiming that infrastructure investment is a key plank in their plans.

But this country seems locked in an old economic paradigm that expects London will keep riding to the rescue and shackles growth further afield. That thinking needs to move on and we need an infrastructure plan unlocks growth rather than simply mitigates congestion.