Christine Ottery of Greenpeace reports from the World Coal summit, which coincides with the second week of UN climate negotiations in Warsaw. 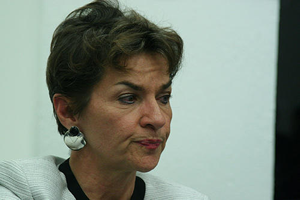 Christine Ottery of Greenpeace reports from the World Coal summit, which coincides with the second week of UN climate negotiations in Warsaw

As giant set of transparent lungs held aloft by protestors dispersed around the outside of the ‘Coal and Climate Summit’ while inside, the heated debate was just getting started.

Coal industry representatives were starting to bluster against the implications of what Christiana Figueres, head of the UNFCCC process for tackling climate change, had said in the morning’s session.

In a masterclass of diplomacy she coated her strong demands on the coal industry in platitudes. She neither approved nor disapproved of coal use, she said.

But what she called for was the closure of all subcritical coal-fired plants – these are the least efficient plants, which emit more than 900g of CO2 per kWh.

A slice and dice of Platts data for Energydesk by Lauri Myllyvirta found this equates to three quarters (73 per cent) of operational plants, globally – some 1.3 million subcritical plants.

Figueres also demanded all new plants – even if they are high-efficiency – to be fitted with CCS (carbon capture and storage), something of a challenge as CCS technology is still in a troubled infancy.

And finally, she noted that most existing reserves must be left in the ground, echoing the analysis from the latest UN IPCC 5 report, and  recently-published data from the International Energy Agency (IEA).

Unsurprisingly given the rest of her demands, Figueres added that the industry must transform, and diversify into renewables. Wind turbines on coal mines anyone?

As the words sunk in temperatures rose in the conference room round the back of the Polish Ministry of the Economy playing host to the summit of the industries’ top executives. One distressed delegate jumped to his feet; the UN climate chief was simply wrong, he said.

Instead of closing plants, or fitting carbon capture technology what was needed was new high-efficiency plants – they argued.

High efficiency plants, that operate at 40 per cent rather than 33 per cent efficiency were touted by several panellists as the first step in a solution towards CCS – something the World Coal Association (WCA) and Polish government claimed in advance of the summit.

The plants are still more polluting than almost every other way of generating electricity, but they use coal and can be deployed now.

Godfrey Gomwe, chief executive of thermal coal for Anglo American argued that coal was as necessary for economic development as it had always been and high efficiency plants the way forwards; while Joachim Lambertz advisor on  Germany’s renewable energy transition for energy giant RWE, claimed “an instructive first approach [building high-efficiency plants] will ensure CCS is widely deployed”.

It is not an argument likely to find a receptive hearing amongst most climate scientists. Ex-IPCC co-chair Bert Metz said that even efficient plants will last for 40-50 years – time during which we need to reduce our emissions drastically. There isn’t time to be building new coal and then building clean coal, he argued.

But it was during the superficially deeply dry panel debate on the policy context for the clean coal in the EU that sparks really started to fly in the Ministry of Economy.

In her forthright speech, Baroness Bryony Worthington, the founder of Sandbag and shadow DECC minister, challenged the industry to find better ways to support investment in CCS, which has a ‘non-existent lobby’. She said the industry had been slow on the uptake with CCS and warned that now the cost of alternative renewable technologies was falling the coal industry is facing “having its market share decimated”.

That went down well.

Addressing the elephant in the room she acknowledged that some attendees were sceptical of the scientific consensus on climate change, saying: “There will be people in the audience that will deny the science – but the science won’t care what you say to yourself to go to sleep at night.”

She compared those in denial to lemmings.

To the climate sceptics in the audience this was bait, and the conference began to descend into a generalised attack on action to tackle climate change – much to the distress, one suspects, of its organisers.

Three of the audience stood up and questioned the fundamental climate science – and were roundly applauded. The first also bemoaned the “huge cost of decarbonisation of 80 per cent by 2050” and suggested the EU should follow the example set by Canada, Australian and Japan and cut back on it’s on climate ambition.

The second incensed delegate claimed  that it was efforts to reduce the emissions which caused the recession, while the third stood up in his seat and proclaimed: “The Europeans must have had a bad education, because CO2 is not a deadly pollutant.”

Cue much guffawing and nodding of heads in the audience. It appears for many, he’d put his finger on it.

Worthington and a co-panellist from the European Commission gamely attempted to rebut the onslaught. The industry should consider the cost of not decarbonising, they said;  the green sector bucked the recessionary trend, they added. The green sector weren’t exactly in the audience though – one suspects they weren’t really trying to win the room.

A lone representative of civil society (or the NGO mafia to many present) was invited to speak. A young woman from the Health and Environment Alliance said particulate from coal fired plants was causing a collective health bill of some $43bn a year. She said the industry was not paying the full price for its actions.

Her speech was greeted with silence by the audience. The panel, Brian Ricketts, the secretary general for coal trade body EUROCOAL, said this was society’s problem, not the coal industry’s.

The sentiment echoed an earlier remark by Lambertz that he did not see why the coal sector should have to pay for the carbon dioxide it produced to be transport and stored – this was, after all, a policy demand imposed on it.

The World Coal Association (WCA) has said that the coal industy is part of the problem of climate change, and wants to find solutions. But was this discussion the kind of ‘constructive dialogue’ the conference organisers’ had hoped to host?