Five things any right minded person SHOULD have hated about 1940s Britain. 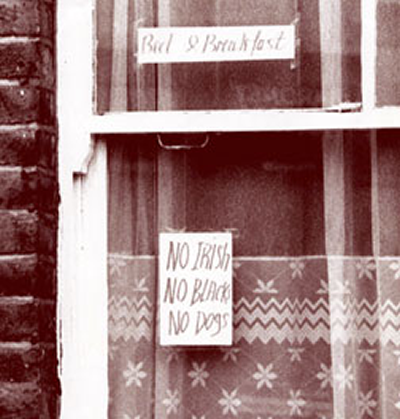 A few days ago, the Daily Mail published an article in which it referred to Ralph Miliband, late father of Labour leader Ed, as the “man who hated Britain”.

Using a quote from 1941 in which a 17-year-old Miliband senior laments the ‘nationalism’ of England, his adopted homeland, the Mail has attempted – let’s not mince words here – to smear Ed Miliband as a politician who wishes to “achieve his father’s vision” of “uncompromising Marxism”.

Admirably, Ed Miliband has responded to the Mail’s execrable piece, and you can read his response here, which is entitled ‘Why my father loved Britain’.

Let us say for a moment, purely for the sake of argument, that Ralph Miliband really did “hate” the Britain of 1941. Wasn’t there in fact quite a lot to hate about the Britain at this time? In fact, would it not mark one down as a particularly uncaring person to have been comfortable with the status quo in 1941?

Here are five things we would (we hope) have hated about Britain in 1941.

In 1940s England, and in London in particular, signs were known to appear in the windows of Bed & Breakfasts and lodging houses reading ‘No Blacks, No Dogs, No Irish, or, alternatively, Irish Need Not Apply – known as ‘INNA’ signs. Black workers arriving in Britain in the 1940s also very often faced discrimination and ‘colour bars’ preventing them from entering pubs and clubs.

Racism directed at non-white Britons went on for many years. A Tory candidate in the 1964 General Election even ran on the slogan ‘if you want a ni**er for your neighbour, vote Labour’.

In the 1940s, the police enforced laws prohibiting sexual behaviour between men, and gays and lesbians were prohibited from joining the military. Gay people were often treated like child molesters, with an attitude not so much ‘don’t ask, don’t tell’ as ‘don’t do, don’t be, and don’t think about it’.

The stigma attached to single mothers in the 1940s was so severe that many women were forced to seek dangerous backstreet abortions or give up their babies to adoption. Women were pressured to assume roles as wives and mothers and, apart from the brief interruption caused by the War, were excluded from the world of work.

Once the war ended, the male female division of labour reasserted itself once again, with employers forcing many women being laid off and others pushed back into lower-paying ‘female jobs’.

In the early 1940s, Britain presided over an empire which still spanned a large area of the globe. Forced Labour was common, and the imposition of steep taxes pushed many people into low paying jobs working for white-owned companies. During this period many had started to rebel against British rule, provoking in response severe repression on the part of the colonial authorities. In just one example of repression, in 1941 student protesters in Burma were charged by the British mounted police and shots were fired into a crowd of protesters led by Buddhist monks, killing 17 people

1940s Britain was a society riddled with class prejudice and inequality. In 1936, six years before publication of the Beverage Report, which laid the foundations for today’s welfare state, the income of the best-off 1 in 1,000 peaked, before gradually falling relative to average incomes until 1979. As professor Danny Dorling puts it: “In the early 1940s, the ‘nine per cent’ – the rest of the best-off ten per cent less the richest one per cent – were paid an average salary of 2.4 times average incomes, the same as in 1959, 1969 and 1973. But as inequalities rose, by 1990 this ‘nine per cent’ were paid three times average incomes and that continued until 2007.”

21 Responses to “‘The man who hated Britain’: why there was a lot to hate about 1940s Britain”