Of the brands involved in sourcing from the Bangladesh garment factory at the heart of the disaster in April, only nine out of the 29 companies have attended a meeting convened to discuss compensation payments. 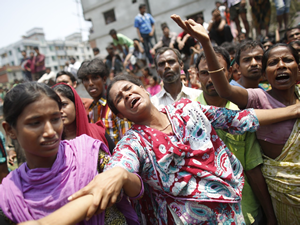 Attempts to bring together the brands and retailers sourcing from the factories involved in the building collapse at the Rana Plaza in Dhaka in Bangladesh stalled this week, when a number of global brands failed to show up for compensation discussions.

The talks held in Geneva were initiated by global unions, IndustriALL and Union Network International, and facilitated by the ILO as a neutral chair. The companies who failed to turn up showed utter contempt for the 1,900 workers who were injured and the families of over 1,200 workers who were killed making their products.

“Consumers will be shocked that almost a half-year has passed since the Rana Plaza disaster with only one brand so far providing any compensation to the disaster’s victims. I respect those brands that came to these meetings. But I cannot understand brands that are not around the table.”

Of the brands involved, out of a total of 29 companies that were invited only nine brands attended the meeting. These were Bon Marché, Camaieu, El Corte Ingles, Kik, Loblaw, Mascot, Matalan, Primark and Store Twenty One.

The global unions along with the Clean Clothes Campaign (CCC) and the Workers Rights Consortium (WRC) presented a proposed model for compensation, which has been used by brands and retailers in previous factory disasters in Bangladesh.

International experts outlined best practices for the establishment of a compensation fund, overseen by a multi stakeholder committee, which could be created through an agreement by all the parties involved. No such agreement was reached at this meeting, although the brands present committed to continuing discussions on this issue.

The Bangladesh permanent representative to the United Nations in Geneva, Abdul Hannan, also addressed the meeting.

The stalled meeting is a slap in the face for the victim’s families who were hoping for immediate aid.

The brands who did attend the meeting committed after two days to meeting again within the next two weeks to share information and tools, exchanging views, and considering further steps. They also pledged to contribute financially to a fund to assist injured workers and victims’ families, and committed to move the process of establishing the fund forward quickly.

A coordination committee was also created to take the process forward through a multi-stakeholder forum which would be open to the Bangladesh government and employers, together with the brands and retailers, unions and NGOs.

Commitment to coordinated work going forward, UK retailer Primark has already provided assistance to victims. Primark made available their local banking infrastructure in Bangladesh to deliver any funds that are made available on an emergency basis.

At the Tazreen compensation meeting on the previous day, C&A tabled its substantial compensation initiative for the victims and demonstrated its continued commitment to finding a definitive solution. Karl Rieker, which was also in attendance, signaled a readiness to contribute and was commended for positive participation in the Tazreen discussion.

“Empty promises and direct untruths since the Tazreen fire and the Rana Plaza collapse all so that these Western multinationals can avoid making payments that amount to a minute percentage of turnover,” she said.

And UNI Global Union general secretary Philip Jennings added that Walmart, as one of “the world’s largest retailer and one of the largest buyers from Bangladesh”, should be a leader in taking responsibility for their global supply chain”.

“Once again Walmart had failed to make a commitment to the workers in Bangladesh who produce the millions of garments sold around the world at large profit,” he added.