We all walk past homeless people on the street, but if we are serious about tackling homelessness then central and local governments need to do much more. 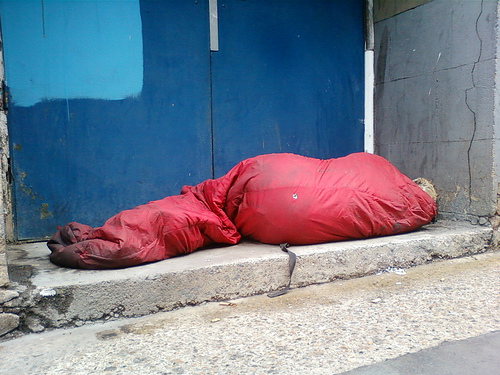 Faye Lipson is a journalist, editor and poet. She lives in South London and has written for the Guardian, New Statesman, Morning Star, Vagenda and a variety of arts magazines.

“Have you got any change please?”  It’s a sentence I hear many times a week, from many different mouths. It is always recited blankly, mechanically; the sounds divorced from their meaning by the force of repetition.

I live in Brixton, which is currently the subject of raging fears about gentrification and rising affluence,  and where the average price of a 3-bedroom home is around half a million pounds. It is also one of the poorest areas in Britain, home to a Trussell Trust food bank which feeds around 200 impoverished people a week. Ironically very few street beggars can access the food bank’s services. Because many are outside of the benefit system, they can’t “prove”’ their financial status one way or the other.

There has rarely been a time when matters of social justice were so much at the forefront of our consciousness. Open any newspaper and you are likely to find articles bewailing a myriad of social ills from housing crises and welfare reform to debt, sexual harassment, child poverty, racism and transphobia. Yet on the subject of begging there has been almost nothing but radio silence from the self-appointed moral elite of the press, punctuated only by absurd stories about beggars drugging kittens or being secret millionaires. These “Jeremy Kyle” stories are simply a diversion from the lurch of moral confusion many feel about begging.

The debate about whether to give money remains, for the most part, an unanswered societal quandary. Those who give are lambasted for fuelling drug use or fecklessness, yet there is an undeniable spasm of unease involved in walking away from a thin, vulnerable person as you feel your wallet weigh against your thigh.

Lambeth – the London council which encompasses Brixton – this week put out a press release trumpeting the success of various actions aimed at cutting the number of beggars in another part of the borough. It claims to have reduced the number of beggars in Waterloo and the South Bank by 40%. On begging rates a few miles south of the river in Brixton, where very few tourists go, the council remains oddly quiet.

Drug tests on Waterloo beggars have reconfirmed what we already know – that the majority are in the wretched grip of class A drug addiction and alcoholism.  This isn’t prejudice, this is a trend consistently confirmed by testing initiatives across the country.  70- 80% of beggars in London alone are believed to be suffering such addiction. Given this, it seems both wiser and kinder not to give money, although gifts of food, drink and warm clothing are surely commendable.

A number of measures, from access to hostel beds to drugs rehabilitation have been put in place to help, with a dedicated number set up for people to report their concerns about individuals sleeping rough or begging. And there have been similar initiatives across the country, everywhere from Aberdeen to Gloucester. But their long-term effectiveness is extremely questionable.

Not all beggars are homeless, but under these initiatives those who are will be helped into temporary hostel accommodation before, it is claimed, being assisted in finding permanent housing.

This is rather a tall tale. The shortage of council housing in Britain is so chronic that people in some areas have to wait over 5 years for an appropriate property.  And if the hideously punitive bedroom tax has taught us anything, it is that single people cannot go off in search of non-existent one bedroom council flats. Where are they going to rehouse these vulnerable people from the streets?

It is likely they will languish in hostels for a very long time. And local authority hostels are often deeply unpleasant hotbeds of drug-taking, sexual abuse and sheer human misery. A former neighbour of mine who used to live in a local authority hostel described it as “Absolutely disgusting. The floor was always littered with needles,” before admitting that she and her partner were so desperate to move on, they conceived a baby in order to get priority for a council property. Another acquaintance was raped whilst staying in a hostel. For a marginalised, recovering drug addict or alcoholic, this environment is perhaps worse than the street.

If the government and local authorities were serious about the issue, they’d be concerned about the begging that takes place outside of the tourist areas, or indeed outside of London altogether. They’d be investing in permanent, high-quality social housing for these people and many thousands of others languishing on lists. Most importantly of all, they would establish and fund a nationwide network of dedicated phone lines and response teams for anyone concerned about an individual on the street to report it. But they’re not. They’re not doing any of it, which begs the question: who the hell are they kidding?