At a recent conference in Toronto of Workers Uniting, the global union created by Unite in the UK and Ireland and the US and Canadian union, the United Steelworkers, I heard a new term, which has now spread widely across the union movement in the USA. 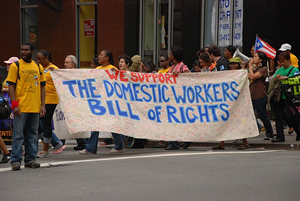 At a recent conference in Toronto of Workers Uniting, the global union created by Unite in the UK and Ireland and the US and Canadian union, the United Steelworkers, I heard a new term, which has now spread widely across the union movement in the USA.

A speaker referred to recent protest strikes in fast food outlets and other low-paid, non-unionised jobs as ‘alt.labor strikes’.

ABC Chicago reported that dozens of workers protested outside of a McDonald’s Rock N Roll outlet in Chicago’s River North Entertainment District recently demanding an increase in pay to $15 dollars an hour.

The protests follow up a major strike in April when hundreds of Chicago fast food workers walked off the job demanding a living wage and joined protest organised by the Fight For 15 campaign, spearheaded by the Workers Organising Committee. New York City workers also joined together to form Fast Food Forward.

In St. Louis Jimmy John’s restaurant workers walked out in a “surprise” strike, with protests and walkouts spreading to other areas of the city and other restaurant franchises.

The strikes across these groups are being backed by a coalition of community and faith-based groups and in some instances by US unions – such as the United Steelworkers.

The ‘Fight For 15’ website says fast food workers are demanding $15 per hour and the right to form a union without retaliation. “Employers like McDonalds, Whole Foods, and Sears are raking in enormous profits while workers like us, mostly adults with families, don’t get paid enough to cover basic needs like food, rent, health care, and transportation,” the website says.

The workers are employed in jobs previously ignored by some US unions – such as the hard to organize fast-food industry that relies on students and teenage workers holding part-time and seasonal jobs.

However the recession has seen many more adults – with families – applying for jobs in the fast food industry.

A statement from lawyers Armstrong Teasdale in St. Louis and Kansas City pointed out that the recent wave of strikes differs from traditional union organising campaigns.

“Although strikes are often associated with labor unions, the workers involved in these impromptu strikes are not unionized. Instead, the efforts are being supported by a coalition of organizations, including labor groups, nominally coined ‘alt-labor,’ that are not legally unions,” the statement says.

Armstrong Teasdale goes onto give advice on disciplining workers who take strike action but warns: “Just because the workers aren’t unionized doesn’t mean the strikers aren’t protected by the National Labor Relations Act (NLRA), the law firm’s statement points out. The NLRA gives workers the right to engage in concerted activities to improve their pay and other terms and conditions of employment”.

The alt.labor protests have also included walkouts by non-union workers at the US retail giant Walmart in Miami, Dallas, Massachusetts and the California Bay recently.

Many Walmart workers who have participated in walkouts say that they’ve had their hours cut, their workloads doubled, faced surveillance and even been fired.

“When workers become active (protesting against Walmart), there’s a lot of toleration of harassment,” Erin Johansson, the research director for American Rights At Work – a union-backed worker advocacy organization in Washington, D.C.

These strikers are part of a campaign dubbed ‘Good Jobs Nation’, again backed by community groups. They are demanding that President Obama take action to improve wages and working conditions for workers employed under federal contracts.

One worker said that the federal contractor ICC Cleaning pays her $8.75 an hour. She said she’s supposed to get regular check-ups for a serious heart condition, but only sees a doctor when she goes back to El Salvador, because she’s uninsured.

The AFL-CIO union federation has now a stated goal of opening storefront operations in every state in its Working America campaign in order to agitate for higher wages and better working conditions as well as supporting and partnering non-union groups.

“We want to figure out a way to make membership more open, to make membership in a union not depend on workers being willing to endure trial by fire in an election or extended pitched battle with the employer for voluntary recognition,” AFL-CIO General Counsel Craig Becker said recently.

AFL-CIO President Richard Trumka has tasked Becker, who served as a member of the US National Labor Relations Board during President Obama’s first term, with overseeing a comprehensive overview of these developments in the run-up to the AFL-CIO’s September convention where it is anticipated many of the alt.labor groups will be present.