Cameron’s description of the UAE as “a role model for the region” is accurate only if you share the government’s vision for the Persian Gulf. 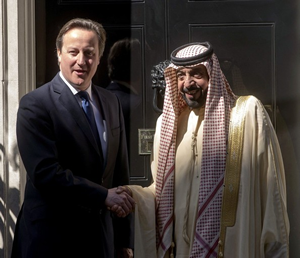 In recent weeks the United Arab Emirates (UAE) has come under serious criticism for the grotesque practices of its ‘justice’ system; first, for sentencing 69 government critics to jail in a “grossly unfair” trial marred by “credible” allegations of torture, and second, for convicting a Norwegian woman, since pardoned under international pressure, for having extramarital sex after she reported being raped.

In light of these exposures, it is worth remembering David Cameron’s remarks earlier this year that “the UAE is a role model for the region” which “must be emulated in terms of adopting balanced and wise policies”.

Examples of said “balanced and wise policies” include the banning of all political parties and demonstrations, laws which permit men to ‘chastise‘ their wife and children by beating them, systemic exploitation of migrant workers, who make up 88.5 per cent of the country’s workforce, and the imprisonment, ‘enforced disappearance‘ and torture of dissidents by the security forces.

Human Rights Watch’s Middle East director Sarah Leah Whitson summarises the situation accurately: “the UAE has become a country where people who speak their mind get locked up, and those who get locked up face torture”.

Leading NGOs now rank the country as low as Iran for political freedom. But whilst the Iran’s “utter disregard for the most fundamental human rights” is cited by the Foreign Office as “a shameful indictment of its leaders”, the UAE is described as “an essential ally of critical importance” whose partnership with Britain “is rooted in shared values” between the two countries”.

Cameron’s celebration of the country’s “balance and wise policies” is no doubt a reference to the UAE’s openness to trade with the UK. The country is Britain’s biggest export partner in the Middle East and the third highest recipient of British arms in the world. Export licenses have been granted this year for the sale of machine guns, rifles, ammunition and riot control gear, weapons which could be used to put down protests should Emiratis brave the streets and call for reform.

But Emiratis know the price they could pay if they chose to protest peacefully. 56 of the 69 political activists jailed earlier in July were sentenced to ten years in prison, a ruling which serves as a warning to the Emirati people that dissent will not be tolerated.

The verdict elicited no response from the British government- standard policy according to Human Rights Watch, who accuse Britain of “refraining from publicly criticising” the UAE. Amnesty explain why: “there is a suspicion that the UAE’s considerable wealth helps shield it from criticism over its disturbing human rights record”.

The British ambassador’s Foreign Office blog on the UAE is a clear example of this. The importance of trade is stressed, but not one mention of human rights can be found. Instead, ambassador Jermey “salutes the Emirati leadership” and praises the “traditional ways of engaging society in decision-making” found in the UAE.

“The UAE also takes very seriously the rights of women”, a claim at odds with the country’s record of jailing rape victims, which includes the sentencing in 2010 of an Emirati women to one year in jail for having “illicit sex” after she reported being gang-raped.

Human rights have declined further in recent years, and yet “our cooperation and bond of friendship have never been stronger”, according to Jermey. The joint defence partnership signed between the two countries last year suggests that Britain’s friendship with the UAE is, if anything, deepening.

The growing support for the regime reflects a long-standing British policy towards the Gulf region, best expressed by the leading defence and security think tank RUSI (the Royal United Services Institute), who concluded this year that “the UK’s forging of closer political and military relationships…will send a clear signal that in the Arab Gulf littoral at least, it supports the preservation of monarchical, undemocratic regimes”.

Preserving the status quo in a region governed by unelected and repressive ruling elites is therefore a key aspect of British policy towards the Persian Gulf. Britain must defend “the preservation of undemocratic regimes”- a policy at odds with the government’s self-professed “commitment to freedom, human rights and democracy”- for reasons of stability, trade and in order to maintain the correct ‘balance of power’ in the region.

Crucially, the Persian Gulf is the source of over half the world’s exploitable oil reserves, “a vital prize for any power interested in world influence or domination”, according to British planners in 1947. The UAE, for its part, is apparently host to the seventh biggest oil and natural gas reserves on the planet.

Stable, pro-Western and rich in energy resources, the UAE is a natural ally and an important friend to British business. Repression is severe enough to crush dissent, but not so severe that it sparks rebellion and causes embarrassment to its Western backers.

Thus Cameron’s description of the regime as “a role model for the region” is an accurate one. But only if you share the government’s vision for the Persian Gulf as a trade-friendly zone for British business where stability is ensured by the iron fist of the Sheikh.