The idea of nations and peoples cooperating instead of fixating on individual respective national interests is popular in trade union movements due to the strongly held principles of solidarity that come with trade unionism. 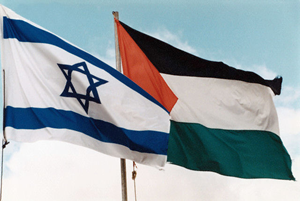 Gary Spedding is a freelance journalist and writer

The idea of nations and peoples cooperating instead of fixating on individual respective national interests is popular in trade union movements due to the strongly held principles of solidarity that come with trade unionism.

Unfortunately, this type of internationalism cannot succeed at campaigning for peace, nor will it achieve cooperation or engender true solidarity, within a context of inequality, ignorant of the power dynamics in play – that of a military occupier (Israel) and those occupied by it (Palestinians).

Speeches such as Emine Ibrahim’s paint a highly misleading scenario by implying boycotts are against progressive forces. This is demonstrably not the case when one reviews that in majority of cases where a boycott is implemented it is done to specifically target or highlight an action or activity that is illegal under international law, or contrary to basic human rights standards.

When defining ‘solidarity’ between Palestinian and Israeli workers one mustn’t condition such as only legitimate if explicitly supporting a ‘peace process’ that has brought no substantial progress, only strife in the last 20 years.

A combination of honesty and trust – key factors when seeking progressive solutions to protracted conflicts – is required.

There is no doubt that trade unionists mostly support cooperation between Palestinians and Israelis, but claims that “almost all trade union centres” favour a defunct peace process is unfounded. Trade union members need to listen when analysts on the ground, such as +972 Magazine’s Noam Sheizaf, discuss that “there is no peace process, nor has there been one in recent times”.

Critique of the Histadrut

In the admittedly succinct speech from Ms Ibrahim, one sees outspoken support for Histadrut intertwined with factual errors and a tendentious version of reality.

Throughout the Mandate era, Histadrut collaborated with the Jewish Agency and actively colluded with Britain to deny Palestinians their right to self-determination. Or so Tom Segev alleges in his book One Palestine Complete: Jews and Arabs under the British Mandate.

In earlier years, Histadrut certainly didn’t achieve free democratic trade unionism, rather it actively organised boycotts of Arab produce and until 1959 did not even permit Palestinian Arabs membership rights.

Indeed, where Palestinian Arabs are concerned the Histadrut fails to represent, especially in the occupied Territories, where [Palestinians] have been employed in appalling conditions with no security of tenure, a lack of health and safety protection and no minimum wage.

A recent report from Kav LaOved highlights this reality in great detail, demonstrating the obstacles and forms of exploitation faced by Palestinians who have to participate in a system currently defended by Histadrut and those feigning sentiments of ‘cooperation’.

Histadrut’s conformity is what brings damage not only to the prospect of peace but justice, revealing an unwillingness to challenge right-wing anti-Palestinian policies held by Israel’s government.

Support for the labour movement in Israel in its current form is effectively propping up the status quo. Palestinians cannot accept a permanent situation whereby Israeli settlements thrive while Palestinian rights continue being thrashed.

Trade Unions have an obligation to ensure that in any undertaking they do not have an adverse impact upon or act in conformity with abuses of Palestinian human rights.

Justice is a basic pre-requisite for a peace in protracted conflict. The Israel/Palestine situation, whilst complex in its own right with its own unique nuances, is no different to any other conflict in this particular respect.

Boycotting without sending an appropriate message detailing clearly ‘WHY’ is as useful as full complacency in crimes in this context. Numerous progressive organisations such as Rabbis for Human Rights, Zochrot – who try to encourage Israelis to look at the Palestinian narrative and educators teaching the Palestinian Nakba in spite of political persecution by the Israeli government – deserve our support rather than non-engagement.

We should respect that two national people groups live in Israel-Palestine – each possessing rights of self-determination – and are fully capable of finding ways to co-exist. For some this means a two state solution. For others it means a common bi-national or democratic state encompassing both peoples, a regional confederation, or any another arrangement that respects human, national and democratic rights to determine a future.

Supporting progressives in Israel should, whilst the occupation endures, always be done in the context of co-resistance. We shouldn’t be vilifying legitimate, nonviolent means of resistance like boycotts.

4 Responses to “Support progressives in Israel by all means, but don’t vilify boycotts”