In Ed Miliband’s speech on social security yesterday, he set out a number of ways in which the present system pays for failure: having too many people in long-term unemployment; subsidising low paid work; subsidising rents rather than building homes; and not recognising contribution. 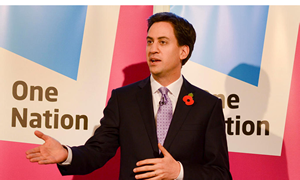 In Ed Miliband’s speech on social security yesterday, he set out a number of ways in which the present system pays for failure: having too many people in long-term unemployment; subsidising low paid work; subsidising rents rather than building homes; and not recognising contribution.

These are all genuine concerns that many people will relate to and Miliband’s tentative policy prescriptions offer the first glimpses of a very different approach to deficit reduction.

But when we aggregate these failures it’s all too easy to see that there needs to be a fifth plank to plans for welfare reform: a coherent ‘regional policy’.

Of course there are low paid workers in London and the housing benefit bill in the capital city is a key reason why we need to tackle the national housing crisis, but too many of these failures are distributed very differently across the country, which means that social security spending is disproportionately skewed Northwards, whilst we are constantly reminded that the tax revenues generated in the City of London pay for the nation.

Regional balance of fiscal contributions 2008/9(£B)

The failure of regional economies outside London is an aggregate failure which the residents of London and the South East are rightly concerned about. The normal response is to reach for regional pay, regional benefits and pump billions into managing London’s congestion problems – an approach which divides the nation and reinforces regional failure.

Instead, IPPR North has put forward proposals to unlock the downward spiral and bring half-a-million Northerners back into work through a coherent economic strategy for the North. In our report – Northern Prosperity is National Prosperity – we argue that the only way to reverse the growing grants and benefits bill in the North is to stimulate the vast untapped potential in its major city-regions.

Rebalancing investment in transport, innovation, R&D are part of this equation, but long-term settlements with local authorities and greater freedoms to borrow and invest are the kinds of measures which – although not strictly ‘welfare measures’ – would pay for themselves as the benefits bill falls.

As the One Nation banner gathers steam, Labour would do well to remember that the party of work found its feet in the regional economies that grafted to build the nation’s wealth. All the evidence is there that Northern cities are poised to reverse decades of welfare dependency, a One Nation – rather than a two tier – economic strategy could deliver.