Today’s employment figures include a couple of headlines the government will be grateful for and what seems like an improvement on the pay front. But when you look at the labour market from a slightly longer perspective, the picture is less brilliant. 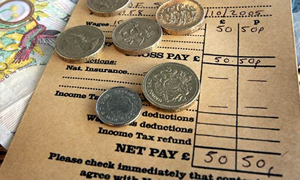 Today’s employment figures include a couple of headlines the government will be grateful for and what seems like an improvement on the pay front. But when you look at the labour market from a slightly longer perspective, the picture is less brilliant.

The first headline is that, for the first time ever, there are more than a million over 65s in employment. This is the most unambiguously positive figure, and employment of people over retirement age has certainly contributed to the period of strong employment growth that began two years ago.

This isn’t necessarily anything to do with macro-economic policy though, it is a long-term trend that began at the turn of the century and was hardly dented by the recession: 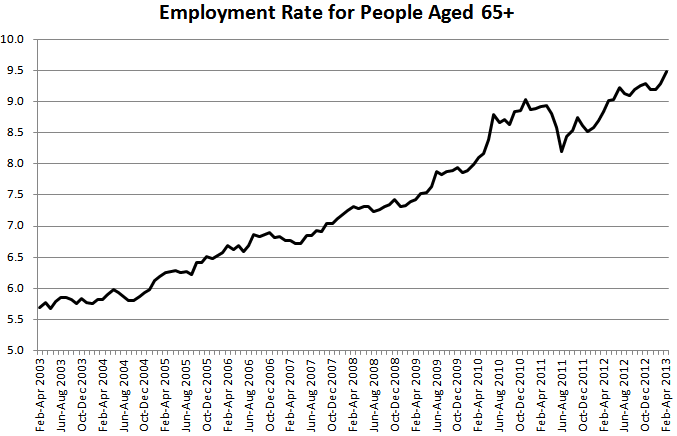 Unfortunately, quite a few of those jobs have been atypical; fewer than half have been employees, nearly a quarter have been part-time and more than one in ten have been unpaid family workers or places on government schemes:

And it looks as though the labour market improvements may be petering out: 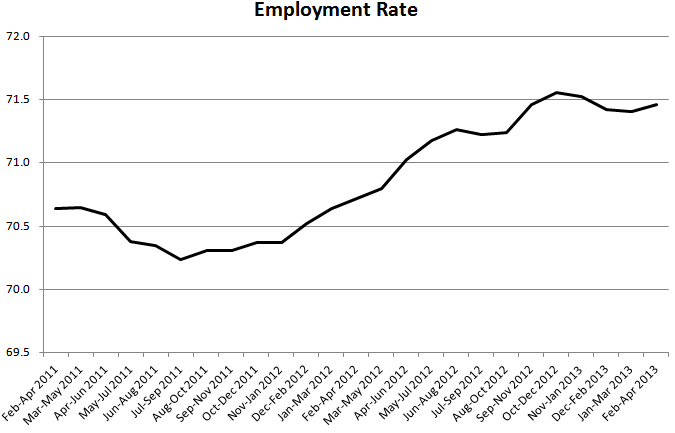 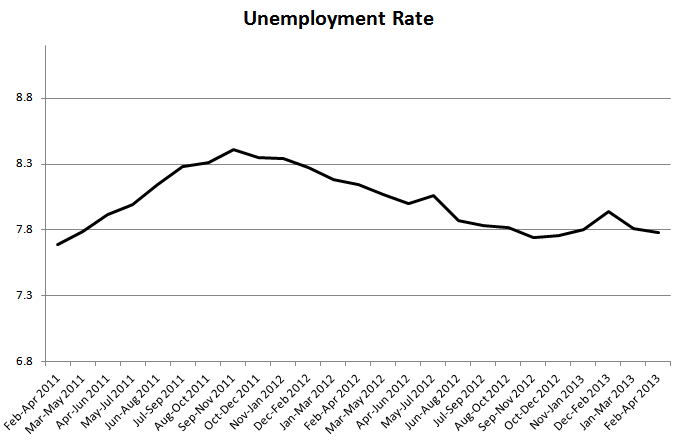 The period of strong improvement began in late summer/autumn 2011 all but finished after a year. The unemployment rate has been essentially stable for six months and the employment rate for four months.

But we shouldn’t over-criticise the labour market’s current performance. A 218,000 increase in the number of employees working full-time seems less feeble when you remember that the economy has essentially been stagnant during this period. And the number of unemployed people per job vacancy has fallen to 4.9 – the lowest figure since Jan-Mar 2009.

The main reason for the reasonable figures has been the collapse of wages. In March, average weekly earnings (total pay) were 0.6 per cent higher than they had been a year before, using the 3 month average figure. In April, this jumped up 1.3 per cent. Using the less reliable single month figures, the improvement was even more marked – from minus 0.3 to plus 3.3 per cent!

It is a sign of the times that this seems such good news, when the Retail Price Index for April was 2.9 per cent. And it is very likely indeed that this improvement is a blip. The change on the year (three month average) for regular pay was significantly lower – 0.9 per cent.

In cash terms, the average weekly bonus in this sector was £69 in March and £143 in April. Almost certainly, this is because those with the power to do so put off receiving their bonuses until they would no longer be subject to the 50 per cent tax rate. The distorting effect of City earnings is obvious.

This is a one-off factor, and average weekly earnings will very probably fall back in next month’s figures. We are still heading towards an economy in which recovery is sluggish and low-paid, low-skilled, low-productivity, low-investment jobs. As you may have heard one or two people remark, Britain needs a pay rise.