Collectively, the changes to employment law amount to the biggest assault on workers' rights ever. They very significantly weaken worker bargaining power, and will increase job insecurity for millions. And like so many of the coalition government’s policies they impact particularly on the most vulnerable. 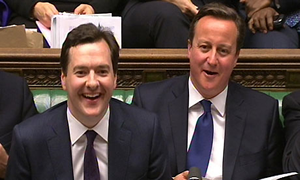 David Renton and Anna Macey are the authors of ‘Justice Deferred: A Critical Guide To The Coalition’s Employment Tribunal Reforms‘

The coalition government has launched the most radical overhaul of employment law since unfair dismissal was created in 1971.

On Saturday, another series of employment law reforms were implemented, including reducing the amount of time employers need to consult on collective redundancies from 90 days to 45 days, the removal of legal aid for all employment cases except discrimination, and adding the requirement that a disclosure for the purposes of protection from whistleblowing has to be in the public interest.

This is on top of earlier reforms, including increasing the time an employee needed to work before bringing a claim of unfair dismissal from one year to two years, raising the amount of costs that can be awarded by an Employment Tribunal from £10,000 to £20,000, and the removal of lay members from tribunals in most cases.

Further reforms are planned, including capping the amount an employee can be awarded for lost earnings in an unfair dismissal case at one years’ salary (or the national average if they earn more than that), and – most controversially – the plan to charge workers fees to have their case heard by an employment tribunal, which will come into effect this summer.

It is worth emphasising that neither party of the coalition included any of these changes in their manifesto, they were not a part of the coalition agreement, and there is no popular mandate for them. Tellingly, they are not even supported by employers, with less than 1 per cent of those cited in the BIS Call for Evidence in 2011 saying that unfair dismissal legislation put them off hiring new employees.

Yet to justify the obstacles it has erected in a workers’ path to justice, the government has stated two overriding aims: to encourage employers to recruit, and to reduce the number of claims before employment tribunals.

The government are convinced that a vital part of kick starting an economic recovery is to reduce workers’ rights, and make it more difficult to enforce those rights that remain – such as, say, claiming compensation should they be dismissed without good cause. The policymakers reason that this will persuade employers to recruit more. This reasoning is flawed; it ignores the fact the UK already has one of most deregulated labour markets in the West.

Taken together, the evidence that these “reforms” will promote employment is simply not there. They will, however, promote job insecurity, enable bad employers to get away with breaking the law, and impact particularly those least able to cope with unemployment (such as older workers who will find it more difficult to find further work) – after which they will then be hit by the benefit changes that have just been made.

The biggest change which came into force on April 6 was the reduction of the 90 day consultation period for redundancies of 100 or more workers to 45 days. The government argues this change will save administrative time and reduce costs, therefore potentially leading to fewer redundancies. Meanwhile, employees will apparently benefit from “greater certainty and a less marked impact on morale and productivity”.

This ignores spectacularly the purpose of a redundancy consultation: it is not merely a means of delaying the inevitable redundancies to enable employees to find new jobs, or even work out the fairest way of selecting for redundancies. It is to provide time for a genuine consultation between a large employer and their employees, a time for both sides of industry to meet to try and avoid, or at least reduce, the need to make redundancies at all.

The government’s bizarre suggestion that technological advances make consultations quicker to carry out conveniently ignores the fact that the difficulties with consultation are normally brought about by a failure by employers to genuinely consult, rather than about a lack of access to information.

That the government sees fit to argue workers themselves will benefit from this change is worrying: being deprived of the opportunity to have a genuine consultation, reducing the chances of changing an employer’s mind about the need for a redundancy, and having less time to apply for other positions can hardly lead to certainty and improved morale.

Of course, this is one of many, many changes that have been made, with many more in the pipeline. Although concerning on an individual level, it is when taken together that the full force of the changes becomes apparent.

Collectively, the changes to employment law amount to the biggest assault on workers’ rights ever. They very significantly weaken worker bargaining power, and will increase job insecurity for millions. And like so many of the coalition government’s policies they impact particularly on the most vulnerable.

Left Foot Forward readers can purchase David Renton and Anna Macey’s latest publication Justice Deferred: a critical guide to the Coalition’s employment tribunal reforms at a cut price of 75 per cent off by quoting 0804Lff2013