Britain and other European countries can play an important supporting role in a US-led process, but the stronger their relationship with both Israelis and Palestinians, the more constructive a role they will be able to play. 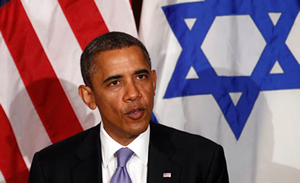 Dr Toby Greene who is Director of Research at BICOM

For many on the British Left it may seem counter-intuitive. Now safely though re-election and freed of electoral constraints, isn’t this when a liberal US President can get tough with the Israelis on settlements and get the peace process moving?

But rather than simply ratcheting up pressure on Israel, Obama’s visit has been presented as a love in with the Israeli government.

This reflects lessons from Obama’s first term, when clashing publicly with Netanyahu did not produce the results he wanted. In assessing the reasoning for Obama’s new approach, there may be some lessons for British policy makers also.

Many of us who want to see a two-state solution will have, at one time or other, entertained some version of a fantasy, in which the President swoops in on Air Force One, bashes everyone over the head with his Nobel Peace Prize and orders the secret service to block the exits to Jerusalem until he gets an agreement. But such hopes are misplaced, and Obama and his administration know it.

In 2009 Obama hit the Middle East peace process running, dispatching George Mitchell as envoy and demanding a settlement freeze. The administration arm wrestled with Netanyahu for months before Netanyahu agreed to a ten month settlement moratorium.

However, getting the concession out of Israel did not result in sustainable peace talks. Palestinian President Mahmoud Abbas had little interest in negotiating with Netanyahu, whom he does not trust. Perceiving the weight of international pressure to be on Israel, and encouraged internationally to unilaterally seek recognition at the UN, the Palestinians successfully avoided negotiations for most of the time.

The lesson: intense diplomatic pressure may force concessions from Israel and may even force the Palestinians temporarily into negotiations. But a process can only be sustained if both sets of leaders see it as reflecting their interests, both are denied alternatives to entering bilateral talks, and both have trust in their negotiating partner and in the US as broker.

The build-up to this trip reflects a different approach. Obama now hopes to reset his relations both with Netanyahu and the Israeli people, fixing another mistake from the first term. In Obama’s desire to warm US relations with the Arab world back in 2009, symbolised by his major speech in Cairo, he skipped over Israel.

This decision, alongside his public scraps with Netanyahu, has left him ever since battling a perception that he lacks an affinity for Israel and its people.

On this visit he will send a message to the Israeli public that he believes in advancing the two-state solution because it is good for Israel, not just because it is good for America’s standing in the Arab world. But he will also make clear that his commitment to Israel’s future security as a Jewish and democratic state is unwavering, in the face of growing regional threats.

He will try to strike a parallel balance between pressure and reassurance with the Palestinian Authority, with Obama visiting the West Bank twice during his visit, and likely to pledge new financial aid.

As the response in Israel to this visit clearly shows, Israelis crave the embrace of world leaders, and Obama’s influence with the Israeli leadership will be maximised if he earns the trust of the Israeli public.

There is a something for British and other European leaders to take away from this example. Israel is more likely to listen and cooperate with those it trusts understands its core concerns. That trust is hard earned and easily lost.

Over the last four years European governments have shown increasing frustration with Israel over lack of progress in the peace process. Their response has been to seek new ways to increase pressure over settlement construction.

Frustration over settlement growth may at times be justified. But when Europeans blame the malaise in the peace process exclusively on Israel, overlooking Palestinian divisions and threats emanating from the region, their interventions can be dismissed by Israelis as attempts to score points in the Islamic world and with their own publics.

As a recent BICOM paper spelled out, there may currently be a window of opportunity for the peace process. But the starting point will not be the US or Europe publicly forcing Israel to freeze settlement construction to entice the Palestinians to the table.

It will be a process built with the parties; approaching each side to hear what it is willing and able to put on the table to establish a basis of trust and reciprocity and to reduce tensions.

This may well include Israeli commitments to rein in settlement growth, but will also involve the Palestinians committing to hold off threatened legal action against Israel and engage in a sustained period of talks.

Britain and other European countries can play an important supporting role in a US-led process, but the stronger their relationship with both Israelis and Palestinians, the more constructive a role they will be able to play.

13 Responses to “Why is Obama hugging Israel today?”