As Westminster debates how best to secure an effective new system of press regulation, Alex Salmond has sought to distance himself from a report his own government commissioned into how to implement the recommendations of Lord Justice Leveson north of the border. 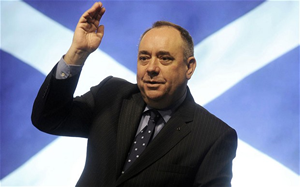 As Westminster debates how best to secure an effective new system of press regulation, Alex Salmond has sought to distance himself from a report his own government commissioned into how to implement the recommendations of Lord Justice Leveson north of the border.

In December, ministers at Holyrood appointed a five person panel, led by Lord McCluskey of Church Hill, a former solicitor general for Scotland, to consider the Leveson report and its implications for the Scottish government and parliament.

Last Friday the review team published their recommendations, which call for a compulsory regime of press regulation that is underpinned by law and has the power to censure newspapers, magazines, websites and social media.

Under the proposals, social networking sites such as Twitter and Facebook would be covered by the new arrangements. Such a regime would go further than the measures set out by Lord Justice Leveson, who did not propose a mandatory system. The McCluskey report, however, argues that a voluntary system, where publishers sign up to a new regulatory system as laid down by Leveson, will not work.

The system proposed by the McCluskey panel would see a regulatory body set up by the industry. It would be policed by a “recognition commissioner” appointed by ministers, and this role would be enshrined in law. If the newspaper industry failed to come up with its own regulatory body, the group has suggested that such an organisation could be set up by ministers.

The regulator should, the panel conclude, have the power to censure newspapers, magazines and websites, while it argued that further regulation of social media might also be required.

In explaining the differences between the McLuskey group’s proposals and those called for by Lord Leveson, Ruth Wishart, a member of the Scottish panel, has written in the Scotsman:

“Where the McCluskey group did depart from Leveson was that we concluded, from painful recent experience, that voluntary ‘membership’ of the new body just wouldn’t work, no matter how many supposedly seductive carrots or notionally intimidating sticks were deployed.

“Instead, we plumped for universal jurisdiction – in much the same way as the press is already universally bound by a variety of laws, including the Contempt of Court Act. As we detail in the report, all our public institutions from the police and judiciary to churches, charities and trade unions are subject to binding rules, a fact of their lives which hasn’t impinged on their independence.

“So, we argue for no opting in or out; rather, all news-related publishers being bound by the codes drawn up by an industry-designed regulatory body. To suggest that is tantamount to ‘licensing’ the press is just plain wrong.”

The proposals have been roundly condemned by all sides of the political divide north of the border. Speaking for the Scottish Conservatives, it’s leader Ruth Davidson concluded that the recommendations if implemented would lead to Scotland having some of the most draconian press regulations anywhere in the world. She expanded:

“The expert group was instructed by Alex Salmond to find ways of implementing a law to control the press and that’s exactly what it has done. Its remit was so narrow it was inevitable a proposal for a new press law would be the outcome.

“It is unacceptable that both the operation and funding of the new regulator would be overseen by a ‘Recognition commissioner’ appointed by Scottish government ministers.

“This is not statutory underpinning but statutory control which would give Scotland some of the most draconian press controls in the Western World.”

Scottish Labour Leader, Johann Lamont, equally concerned at the report’s findings, has argued that whilst supportive of the expert panel having been established, Scottish Labour “did not agree to the Leveson recommendations being rewritten or built upon”.

Scottish Lib Dem Leader, Willie Rennie meanwhile declared the panel’s findings to be “unexpected” and said that careful consideration was needed before rushing into anything.

Reports in this week’s Scotland on Sunday now suggest that the SNP Government concur with those fearing that the proposals outlined by McLuskey et al go too far, with Media lawyer Alistair Bonnington, BBC Scotland’s former head of counsel, declaring:

“It is highly likely the McCluskey proposals are so draconian as to offend against the European Convention’s provisions on free speech.”

Dubbing the McLuskey panel’s recommendations a “distraction”, the Scotsman’s Leader Column on Saturday attacked the work as going way beyond its initial remit. The paper explained:

“The McCluskey panel goes well beyond its brief of seeing how Leveson could be introduced here. It comes to the view that Leveson’s proposals are flawed and that it needs to amend them in a massively significant, impractical and costly manner.

“It was Leveson’s view that signing up to the new regulatory body had to be voluntary and that ‘all significant news publishers’ would sign up and adhere to the new system. But Lord McCluskey’s panel thinks that Leveson is mistaken and proposes to make adherence to a new system obligatory under statute.”

“There are many issues to be debated on the Leveson proposals, not least the fundamentals of statutory underpinning, the make up of new regulatory body and the incentives and disincentives for publishers and ensuring the public have confidence in the outcome.

“The McCluskey report has simply proved itself to be a distraction. The Scottish government has so far said that discussions will be ongoing. That is to be lauded, and let us hope this report does not form too large a part of the sensible discussions to follow.”

The Herald meanwhile warned that a fine line exists between statutory underpinning of regulation and statutory control. The paper concludes:

“Lord McCluskey’s report goes wider than many expected in suggesting the regulator could also have the power to censure websites and social media. This poses obvious problems. The group say they do not think a voluntary opt-in to the regulator would work for the press. That issue must be addressed but it would be impossible to require all social media to sign up to a regulator. Further regulation of such sites may be necessary but could a press regulatory body take on such a vast task? This must now be carefully considered by all parties. If the Scottish government wants to take the industry with them, as they say they do, they must take on board its concerns over the difficulty of preventing statutory underpinning from becoming statutory control.”

One Response to “Scottish politicians unite against press regulation”