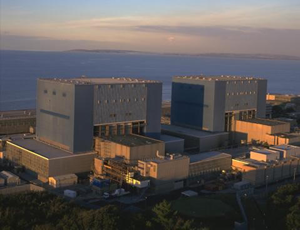 Emma Gibson is deputy head of campaigns at Greenpeace

The last nuclear power station to come on line in the UK was on Valentine’s Day 1995. This afternoon Ed Davey stood up in the House of Commons and sealed the Lib Dems’ newly discovered love affair with nuclear power by announcing planning permission for a new power station at Hinkley in Somerset.

It’s arguable that at some point in the last decade, us greenies took our eye off the ball while the nuclear industry rebranded itself as the magical solution to the problem of climate change. As someone who once led a protest team of Homer Simpsons over the fence at Sizewell nuclear power station, this is hard to stomach.

It’s rumoured that the government is about to agree a ‘strike price’ with Hinkley’s operators EDF which is twice the current market price of electricity and will be fixed for 40 years. And to think we’re always being told that wind farm push up energy bills up. British taxpayers will be footing this colossal bill for the next four decades.

Nuclear is a mature technology as it has been operating for over 50 years – it should no longer need this kind of leg-up.

DONG Energy, who are about to open the world’s largest off-shore wind farm off the coast of Ramsgate, said this month that it could reduce its costs to be on a par with nuclear power by 2020. That’s still before Hinkley C would be switched on (assuming no more delays – nuclear power stations do not have a good reputation for being on time or on budget.)

There are two reactors being built in Europe that are similar to Hinkley – both are overdue and considerably over budget.

In Flamanville France, Italian utility, Enel recently pulled out after repeated delays and cost over-runs. In Finland the Olkiluoto 3 project (already four years overdue) recently announced it will fail to meet its latest deadline of 2014 and a new deadline has not been set.

The delays are forcing Finland to burn more fossil fuels and have led it to rule out further reactors to the same design.

Even if built, nuclear power is far from an ideal energy source. The need to run it constantly forces significant investment in storage, as for renewables, and nuclear power plants are prone to outages, requiring significant gas or even coal backup, and grid reinforcement.

But what about the potential for jobs from building Hinkley C?

EDF has claimed that the construction of the power plant will involve 25,000 jobs and that it will then directly employ around 800 people. But if the UK hits its target of 15 per cent renewables by 2020, it will create 10 times more new jobs than Hinkley, even the peak employment during of its construction.

Finally, there’s the six billion dollar half-life question: what do you do with the nuclear waste?

In a speech in the Greenpeace warehouse just before the last election, the prime minister himself said that until the waste issue is sorted, no new nuclear is possible.

The decision by the Cumbria local authorities to reject a waste storage site beneath the Lake District leaves the government with no plan for waste disposal from existing or new nuclear power plants. No other local authorities have volunteered to host a waste store. Greenpeace has written to the government warning it that new nuclear without a solution to waste may be illegal.

Despite today’s decision, it’s far from certain whether Hinkley C will ever be built. But if it is, UK households will be getting ripped off for the next 40 years.