Today’s figures (covering November to January) have people wondering if the labour market may be running out of road. The key figure in today’s release is for pay. Average weekly earnings for regular pay (3 month average) in January were just 1.2 per cent higher than they had been a year earlier – the fifth successive fall in the annual rate of increase. 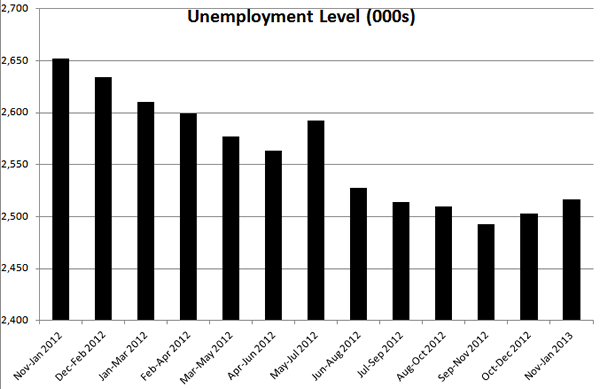 For a year now, economists have been trying to figure out why the world of work has been moving in the right direction when the economy is stagnating.

It’s been a good problem to have, but today’s figures (covering November to January) have people wondering if the labour market may be running out of road.

Although the employment level and rate are both up (131,000 and 0.3 points), the unemployment level is up by 7,000. Last month’s figure was an increase too; it’s too early to say this is a new trend, but it is very worrying.

And there is a similar pattern for long-term unemployment (6 months plus): 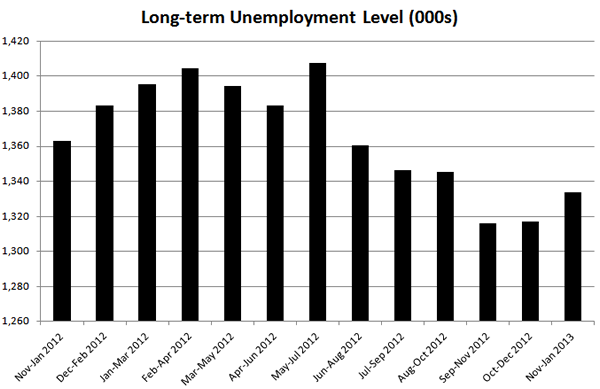 Youth unemployment rose 48,000 to 993,000. 13.7 per cent of young people are unemployed – a figure that has increased for the third successive month. The number and proportion of young people in employment also fell: the youth employment level is down 30,000 from August – October and the proportion fell from 51.4 to 50.8 per cent.

Looking at the strong performance of the past eighteen months, we have paid a great deal of attention to the figures for actual weekly hours worked. These have been rising since the summer of 2011 – indicating that there has been a real increase in employment; increases in temporary and part-time work aren’t the whole story.

This month the figure fell slightly, and was down a quarter of a million hours from August – October.

The key figure in today’s release is for pay. Average weekly earnings for regular pay (3 month average) in January were just 1.2 per cent higher than they had been a year earlier – the fifth successive fall in the annual rate of increase.

The figure for total pay (including bonuses) was also 1.2 per cent, the third successive fall. But worse than this, the absolute level of average weekly earnings is falling: down from £472 a week to £470 for total pay and from £444 a week to £442 for regular pay. This is below inflation, which in January was 3.3 per cent (Retail Price Index, 2.7 per cent using the Consumer Price Index).

Falling pay in real terms helps explain why employment has held up reasonably during a period of stagnation but it also smothers demand. This means that the medium to long-term prospects for employment aren’t so good and economists are adjusting forecast unemployment upwards. Today the Treasury published their latest round up of City economists’ forecasts for 2013 and 2014.

It’s too early to say with certainty that our run of good employment luck has come to an end. The employment level and rate are still rising, after all.

It could be that falling real pay will encourage entrepreneurs to stick to less productive, less value-added business models and postpone investments. If that happens it may defer the labour market crunch that still seems likely, but it won’t be good news.