It's time Britain joined the other major economies of Europe in introducing the Financial Transactions Tax to help pay down the deficit. The other option is to continue to cripple its poorest citizens. 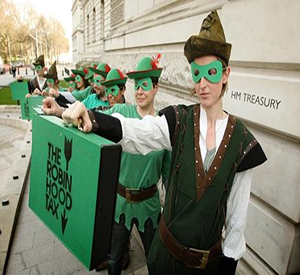 Once upon a time, the financial transaction tax (FTT) was the stuff of legend, supported only by radical economists and written off by the European Commission as unfeasible unless introduced on a global scale.

But now, with 11 member states moving forward with the Commission’s ambitious plan to place a 0.1 per cent tax on transactions in shares and bonds transactions and a 0.01 per cent tax for derivatives, with robust anti-avoidance measures built in to compensate for the lack of EU-wide agreement, the world is set to see the first working model of an international FTT.

It is significant that four of the EU’s five biggest economies are set to introduce the tax in 2014. But the UK, home to the EU’s largest financial sector, is conspicuous in its staunch opposition.

George Osborne has written the EU’s FTT off as “economic suicide”, but his alternative is an attack on Britain’s poorest people.

Next month, the under occupancy charge – erroneously but evocatively described as the “bedroom tax” – will make 660,000 people living in social housing £728 per year worse off, according to Department for Work and Pensions estimates.

The charge, to be deducted from the benefits of those in houses with one or more unused bedroom, will fall disproportionately on disabled people and single mothers. Even the most cold hearted apologist for austerity would struggle to make the case that these people got Britain into its current economic mess.

Meanwhile, Osborne is giving handouts to the richest individuals and biggest companies by abolishing the 50p tax rate and introducing ever larger corporate tax cuts, whilst he has raised the cost of living for the poorest families by raising VAT.

The chancellor’s priorities are all wrong.

Instead, he should be looking to the source of the financial crisis to help raise the revenue necessary to offset an austerity drive that has the country teetering on the brink of a triple-dip recession and to invest in infrastructure and housing projects which will provide homes for the poor, jobs for the unemployed and kick-start the economy.

The advantage of the FTT is that despite miniscule rates it could bring in £10 billion a year for the British economy. Instead of placing the huge burden of reducing the deficit on the weakest backs, it spreads a light load across the strongest.

Crucially, it will also help to discourage some of the kinds of risky transactions that helped cause the crisis in the first place. Meanwhile, it will go some way towards recouping from the banks the cost of the bailout and can be used as an insurance fund against future bail outs.

While Osborne remains stubbornly opposed to exploring the benefits an FTT can bring, Labour have begun to make the right noises about it.

Writing in the Guardian this week, Chris Leslie, shadow financial secretary to the treasury, said that the time is now right to start looking seriously at the FTT.

Leslie stops short of calling for the UK to join the 11 countries looking to introduce the FTT next year, however.

But if global tax policy moves at the pace of the slowest countries, little will be achieved. The Commission itself initially ruled out an FTT that was not global. But as Manfred Bergmann, the FTT’s architect, told me, EU countries simply needed the money and it was time to “lead by example”.

It’s time Britain joined the other major economies of Europe in introducing the Financial Transactions Tax to help pay down the deficit. The other option is to continue to cripple its poorest citizens.