Jeremy Hunt has failed his own test on Lewisham Hospital following his decision on the hospital's future last Friday. 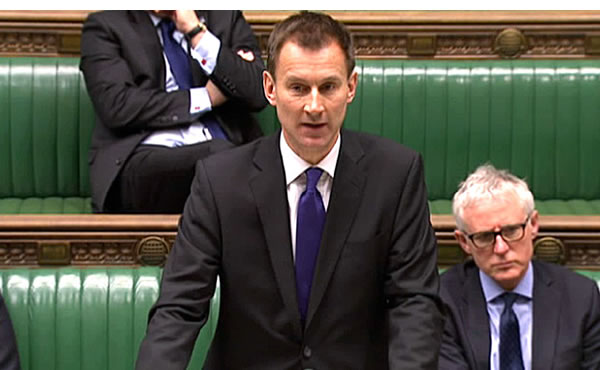 When Jeremy Hunt spoke to the press following his House of Commons pronouncement about the demolition of two thirds of the Lewisham Hospital site – including new build facilities costing many millions – he said he “wanted to be able to look Lewisham people in the eye afterwards”.

Words on the grapevine had whispered Hunt, due to the strength of the Save Lewisham Hospital Campaign, had changed his mind more than once during this rushed non-consultation.

The clear messages illustrating the nonsense of Lansley-appointee TSA Matthew Kershaw, and the potential illegality of his stepping outside his South London Hospital Trust remit, obviously weighing on his mind.

Mr Hunt himself had set the four criteria for measuring his decision, however he obviously saw these were impossible to fulfil and thus passed the £5 million consultation buck to Sir Bruce Keogh – whose analysis seemingly overrode both consultation feedback and local professional knowledge.

They both knew the most accurate assessment would be:

• Strengthened public and patient engagement – only in opposition;

• Clarity on the clinical evidence base – barely asked and not present;

– but determined to plough through the Kershaw Plan they re-wrote their own.

And lest you think this is being too Lewisham-centric and ignoring South London Health Trust clinicians, take a look at this whistleblower interview from ITV’s excellent Paul Brand; this was not a consultation – this was pure intimidation.

Points one and four were completely ignored in Hunt’s statement to the House (and lest we not forget, ‘Patient Choice’ was the watchword of the Health and Social Care Act).

Instead, they maintained that by dismantling all the acute elements of a Top 40 hospital, local people would experience more efficient clinical input and improved patient care – and even in the face of the evidence increased travel times of no more than 2-3 minutes:

Sadly the immediate press – and also 38Degrees, instead of seeking feedback from the hospital and the campaign – fell into the Hunt Trap in seeing it as a partial victory for the campaign. [See: “Embattled Lewisham A&E gets a stay of execution as Jeremy Hunt shies away from closure” – The Independent].

Certainly Jeremy would not have felt the need to justify himself or congratulate the campaign had it not been so successful, however we need to be clear, Hunt is nothing more than a hustler for privatisation and Lansley’s foreman for the running down of the NHS.

As for Hunt’s “I feel for the elderly and frail” mini-A&E, no such thing exists in medical parlance. An A&E without an ICU is like a Bradley without a bicycle.

“An A&E of the type described by Hunt is little more than an Urgent Care Unit – patients will still have to be transported to other hospitals because we will no longer have an Intensive Care Unit or acute provision here.

“My medical college says no such model exists.”

Thankfully the broadcast media and the local press, and later national columnists were more on the ball and their coverage has been – and continues to be – largely excellent. We are told this is due to both the issue and the joined-up manner in which the campaign has been conducted.

Now, in case you have missed the detail, here is a quick re-cap:

Tuesday, January 8th had seen the announcement of TSA Kershaw’s recommendations for solving the problem of the insolvent, badly designed PFI-bust South London Health Trust and the future of the hospital he has dubiously inveigled into the scenario – solvent, successful Lewisham Hospital, which currently sits in the Top 40 top of the NHS hospitals charts.

The Kershaw Plan was duly revealed –  and then the financial truth was out – at a mere cost of £1.093 billion and a continuing loss of at least £450 million in 30 years, a mind-boggling 60% of Lewisham Hospital would be demolished with a range of crucial services being lost.

These include a brand new £12million A&E, acclaimed paediatric services, the very well regarded intensive care unit (used by patients from across London) and state of the art maternity services, as well as elderly acute services and cardiac care – all to be turned to rubble at a cost of £55million and an immediate loss to the hospital of £195million.

Such is the nonsense of this nihilistic plan it became a trending topic on Twitter after the BBC Question Time panel at Goldsmith’s College were almost uniquely united in condemnation.

At this point I would ask you to note Mr Kershaw is not exactly Mr Frugality. His rushed 30 day ‘consultation’ had an allocated budget of £4 million. Following an FOI by a local Lib Dem councillor, it emerged that after admonishing Lewisham audiences for being careless with our use of funds (despite being solvent), Mr TSA had overspent his kitty by more than 25%.

Clearly his team have consumed vast quantities of biscuits and cups of tea whilst poring over the best means of compiling a complete misrepresentation of a solvent successful hospital via inaccurate data projections and travel time assessments “when there is no traffic on the road”. An interesting concept when the level of ambulance and general traffic flow will significantly increase if these measures go through.

In response, 25,000 people had turned out in the late January sunshine to give Hunt and Kershaw a resounding message:

Such a phenomenal show of support to an event planned by almost round-the-clock volunteers in just three or four weeks shows both how deeply people care about preserving the NHS, as well as a growing understanding of the nonsense of the Kershaw Plan –  inconsistent even to arch-marketisers who would maintain they reward success.

The police afterwards praised the campaign for the managed way the protest had been run – carrying on with the aim of delivering the message in a clear and rational way.

Most people expect their government to be most interested in developing services which look after the country’s citizens – not turn them to rubble, and more than 50,000 signatures had been received on the campaign petition, presented to Mr Hunt with accompanying Lewisham NHS Healthcare Trust choir.

All SE London Members of Parliament across the parties had told Mr Hunt that to proceed with the plan would be a pure act of folly which would leave surrounding services under huge pressure and where nobody would gain. After Hunt’s announcement, Dame Joan Ruddock MP (Labour, Lewisham Deptford) blasted his plans for Lewisham as “a sham and a shambles”.

All South East London MPs – including Conservatives – were incandescent on the floor of the Commons. Were Lewisham a dud service there would be more logic – but it makes no sense clinically and it makes no sense economically.

Far from listening to 96% of the Lewisham respondents who had replied with strong concerns and opposition to his plans, and to the horror of the hospital staff, in a gross act of ‘Absurdity and Emergency’ the only pre-cradle to grave emergency care on offer to the whole borough is to be left in the hands of GPs, midwives and a consultant, instantly wiping out services to babies and children who have hitherto been offered some of the best care in the country.

The previous week a flash mob of some of the youngest campaigners popped up which caused something of a pavement sensation. After all this, he must now be clear – Lewisham people have the capacity to be heard by the nation.

So the fight for the future of Lewisham Hospital and a full A&E and maternity unit and the retention of our exemplar paediatric services goes on; the full response of the Save Lewisham Hospital Campaign to the Hunt decision can be found here on the excellent campaign website.

Not leaving it there, the campaign is now going global. News stations from around the world are featuring the story and now stations playing to international audiences are playing ‘Save Lewisham A&E!’ by rapper Question whose life was saved by Lewisham Hospital.

He performs his story in company with the Lewisham NHS Healthcare Trust Choir and campaign members. Produced by music campaigner Charles Bailey, it’s a catchy little tune which gives another strong expression to the cause – as well as raising funds for the campaign (35p per click to be precise!) download it here.

Along with Lewisham council and the hospital, campaigners are looking at the fine detail of potential legal challenge to what Andy Burnham afterwards dubbed the “Lewishambles”.

Far from being broken, Lewisham Hospital is open for business – and intends to be here to stay. Do watch this space – not least because this is not just a Lewisham issue…

• Campaigners step up fight to save lives and Save Lewisham Hospital – December 17th, 2012