A referendum should be held sooner rather than later - pro-Europeans must not be afraid to make the case for EU membership, writes Caroline Lucas MP. 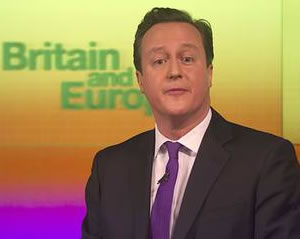 A referendum should be held sooner rather than later – pro-Europeans must not be afraid to make the case for EU membership, writes former Green Party leader Caroline Lucas MP

David Cameron today set out his plans to renegotiate Britain’s role in Europe and then hold a referendum. But not for another five years. And only if the Conservatives win an outright majority.

In other words, he wants to bury the issue of Europe until after the next election, as a way of blackmailing the public into a Tory vote. He also intends to blackmail his EU counterparts with the threat of an in/out referendum in the important negotiations about our relationship.

I have consistently supported a referendum on our membership of the EU – not because I am anti-EU, but because I’m pro-democracy. It’s right people should have a say on an issue of such importance to their everyday lives.

No one under the age of 55 has had an opportunity to vote on our relationship with Europe, in spite of the fact the three largest parties have all promised EU referendums of one sort or another in recent years. To continue to oppose one undermines trust in the political process, and breeds anger and resentment.

But let’s ensure the debate in the referendum isn’t just about pro EU versus anti-EU: far more relevant is, what kind of EU?

Green Party MEPs have long been building support for radical reform of the EU, increasing its transparency and accountability, and refocusing its objectives on co-operation and environmental sustainability rather than competition and free trade.

And let’s not indulge in political gamesmanship by saying “yes to a referendum – but not yet”. Instead of trying to fix the timing of a vote to maximise party advantage, let’s put the national interest first.

Postponing a referendum until 2018 will commit us to five years of economic uncertainty – with all the damage that will cause to UK industry and inward investment. It will also mean another five years of bitter political feuding and mounting media-driven hostility to the EU, poisoning our relationship with other member countries and limiting our influence.

The truth is we won’t be able to make progress until the in/out decision is resolved one way or another.

Far from being a distraction from our economic and environmental woes, our relationship with Europe is critical to their resolution. It is at EU level proposals for serious banking reform are being made and suggestions for a Financial Transaction Tax are being taken forward.

Crucially, it is also where steps are being taken to bring about tougher climate policy within the 27 member states, and to influence the policy of others worldwide.

That’s why, in a referendum campaign, the Greens will fight for continued membership of the EU, but – with equal vigour – will make the case for wider EU reform. It is a case that already has considerable support amongst other member states.

During that campaign, we will set out a far more compelling vision of the EU’s role and purpose, and aim to inspire people about an EU which can genuinely spread peace and sustainability, and promote democracy and human rights.

This is very different to David Cameron’s outdated vision of the EU as little more than a free trade club. It’s about creating a new, better Europe which will put people’s security and quality of life ahead of the profits of banks and big business – and which can truly rise to the challenges of the 21st century.

7 Responses to “Comment: YES to a referendum, YES to a better Europe”