Jos Bell writes on the progress of the Save Lewisham Hospital campaign and the continued ignorance of Messrs Hunt and Kershaw. 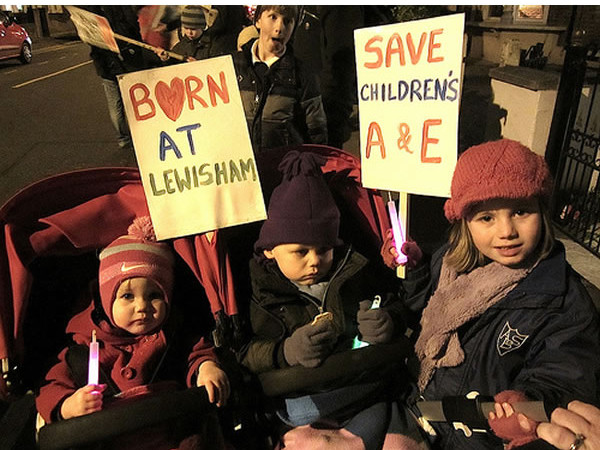 “We don’t want your closures here,

So sings five-year-old Emily, proud of her first efforts at composing. She may be a future political speech writer or a female Billy Bragg in the making, but in these few short lines she has caught the essence of the overall Lewisham response to the TSA – essentially it stinks.

Thursday marked the final day of the rushed 30-day TSA ‘consultation’ period, which had seen thousands upon thousands of the Lewisham population mobilise as of one voice, whilst the previous day, Lewisham hospital – previously cited by the PM as one of the 29 hospitals he would defend, featured large in the Commons opposition, focusing on the government’s failure to protect the NHS and figures fudging – so ably demonstrated by Stephen Dorrell when he described a reduction in front-line services as “modest growth” within the “revenue expenditure”.

On the matter of Lewisham capital, as Dame Joan Ruddock MP patiently explained to our novice Secretary of State, the Lewisham PFI is affordable and solvent and Lewisham should not be made to pay the price – particularly if Jeremy Hunt’s own four tests are applied. Namely: the support of local GPs; the support of the local people; sound clinical evidence and improved patient choice. Not one of these can be met.

She also noted the plans to “grab a successful, solvent and highly regarded hospital, Lewisham, and propose to destroy it to raise money from the sale of two thirds of the site currently occupied by the hospital” are not even mentioned in the consultation document.

Heidi Alexander MP then had to state the obvious to Hunt, essentially asking why he thought 60% of the Lewisham site should be smashed into tiny pieces at a cost of £55 million and a loss of £37 million, so as to shove the majority of patients through the QEH Woolwich doors – with reduced facilities, difficult location and the need to spend even more money to bring their site up to scratch?

“Surely every pound should be spent wisely and well?”

You might think Lewisham campaigners would be flagging after the past few weeks of hectic activity – but not a bit of it. Thursday evening’s street vigil outside the hospital drew a crowd of more than 300 from across the ages. Banners, braziers and candles lit up the night, whilst almost every passing motorist tooted in support. Songs were sung, children held tea lights and homemade placards and the TSA report was ceremonially braziered.

Last time we looked, the petition set up by Heidi Alexander MP stood at 32,000 – now at the final day of reckoning, with queues of people lining up to sign street petitions throughout the week, the number is now approaching 40,000. But after all, this only counts as a single response to the TSA draft recommendations.

So the Save Lewisham Hospital campaign fund raised to distribute Freepost envelopes for incensed residents to send in a response, knowing that a large proportion of the many thousands who feel so strongly about this proposal will not have been able to work their way around the TSA website, let alone complete the Ipsos/Mori online survey, full to the brim as it is with leading questions and a requirement to have read specific chapters of the TSA document prior to completion.

As for those unable to read the small print, although provided, seemingly the cobbled together summary of the evasive TSA document simply would not do as an aide to completing the survey – and yet the TSA Office felt it sufficient to send a blind person a Braille version of simply the summary – and with no accompanying instructions on how to complete it or participate. Should we therefore be surprised  they have completely omitted to undertake the legal obligation of an equality impact assessment?

Kershaw has been caught playing fast and loose with various key groups in this process:

• Cancelling his attendance at a meeting of GPs at the last minute – a meeting which they had requested and which had not been offered;

• Articulate and knowledgeable people in public meetings and focus groups prevented from speaking out;

• Meeting doctors in the false belief that he could baffle them with a jumble of made up figures and being forced to admit that he had based his judgement on faulty data – as reported by @nytspider, Dr Chidi Ejimofo, (A&E consultant and splendid tenor of the Lewisham hospital choir);

• Limiting access to meetings by opting for small venues – and selecting the 55th anniversary of the Lewisham train crash for a meeting a stone’s throw from the hospital to try to tell the people of Lewisham our hospital would largely be razed to the ground.

Why was he surprised local people were angry? In which case is he disappointed protest has been orderly? Probably.

Indeed, this misnomer of a consultation has brought forth a barrage of protest. We define the act of consulting (or conferring) as a “deliberation of two or more persons on some matter, with a view to a decision” – this does not mean one person pitches up, tells the other what they are going to do and then goes away again. This does not entail one person being told in no uncertain terms their knowledge and input is unwelcome and they will be asked to leave the premises unless they say nothing more. That is dictation and intimidation.

As the Save Lewisham Hospital campaign declares in the final comment in the response to the TSA:

“The process has been nasty, brutish and short, is probably illegal and has inadequately consulted.”

Burnham’s letter of December 9th to Jeremy Hunt flags up the vital aspect of legal compliance:

“…we cannot accept the inclusion of recommendations affecting the reconfiguration of services at Lewisham hospital within the TSA Report and believe the consultation on these should be stopped immediately.

“Lewisham hospital is outside the purview of the TSA terms of reference and I am clear that the powers associated with the Failure Regime policy were not intended to be used to encompass service changes in other hospitals and allow back-door reconfigurations of services without proper public consultation.

“I believe that consideration of services at Lewisham hospital, as part of the TSA review breaks an important principle.

“It is clear that the inclusion of proposals for service changes at Lewisham hospital within the TSA report is in breach of the provisions above and therefore should be stopped.”

Burnham also reminds Hunt the King’s Health Partners merger plans involving King’s, St Thomas’s and Guys are in process and will impact on the whole of the south east London health economy. To have two converging re-alignment assessments will be notably counter-productive.

It may be Lewisham and Woolwich QEH do become conjoined, but Burnham reiterates this needs to be done after the SLHT sustainability has been properly established via Picture of Health findings, plus what he refers to as the more acceptable recommendations from the TSA – and certainly not including largely demolishing and destabilising the Lewisham site.

In turn, Lewisham Council’s response to the TSA alludes more than once to the prospect of a judicial review if Kershaw and Hunt fail to comply with the letter of the law – but only if good sense (and legality) does not prevail in the meantime. Clearly the cost of this would be significant – to plough on regardless and waste not just £35 million plus of capital funding, let alone some shiny new-build facilities – but also the expense of judicial review would publicly fly in the face of the government’s cost saving smokescreen to their privatisation drive.

We should probably leave Kershaw’s family to consult amongst themselves as to whether or not to pop gift packs of Lynx in his Santa stocking – but if these services are not protected, the future of Emily and thousands of Lewisham inhabitants, as well as that of our neighbours in surrounding boroughs, is at grave risk.

Jeremy may think this is a little local storm in a teacup as he quaffs his Christmas bolly – or that he may as well be hung for a nativity play comedy sheep as a Norman Lamb – but he needs to realise that if real people with very real lives are not listened to, this will have enormous ramifications, not just for his tenure in the Department of Health, but also that of his party’s place in the nation’s history.

Smashie, Burnsy and Grabber will be remembered as the three killers of the NHS apocalypse.

Dame Joan quoted the Save Lewisham Campaign as saying:

“This is not just a difficult decision, this is a potentially deadly decision.”

A few years ago, after I just managed to make it to their A&E before my pulse stopped, I spent my Christmas in Lewisham Hospital. I know they really would like it very much if you could send them a nice Christmas card of support.