The eurozone shows slow signs of improvement as a downgrade looms for the UK's credit rating - Tony Burke reports on the state of the global economy. 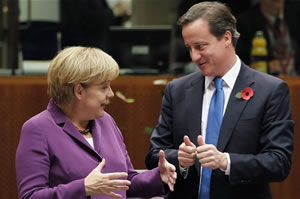 In Markit’s latest report, the eurozone manufacturing Purchasing Managers’ Index (PMI) rose to 46.3 in December, from 46.2 in November. A reading below 50 indicates contraction.

This a rare bit of good news from the beleaguered eurozone, which the UK coalition government is only too eager to blame for the failure of their own policies and the lack of economic growth at home.

The PMI notes the rate of decline in manufacturing has showed “signs of moderating”.

“The eurozone downturn showed further signs of easing in December, adding to hopes that the outlook for next year is brightening.

“A return to growth is looking like an increasing possibility in the first half of next year, barring any surprises, if the recent improvements in the survey data can be sustained. The turnaround is being led by Germany.”

With prime minister David Cameron urging manufacturers to ‘look to Germany’, indications show the total output from Germany rose for the first time in eight months – “though the increase was only very modest as an upturn in the service sector was offset by a faster decline in manufacturing production,” the Markit survey said.

On the downside in the eurozone, output fell for the 10th month on the bounce in France. Only Germany still has maintained a clean sweep AAA rating from all three major ratings agencies.

It is anticipated at least one of the ratings agencies will remove the UK’s triple AAA ratings in 2013 – something George Osborne and Danny Alexander are anticipating by spinning it would be no big deal… if that happens, Osborne’s that the UK is a “safe haven” will look increasingly hollow.

Separately, a survey showed China’s manufacturing sector expanded in December at its fastest pace in 14 months as new orders and employment rose. US manufacturing had its best month since April 2012. Economists hope growth in the USA and China will help drag other economies including the eurozone along in 2013.