The Marikana massacre resulted in the deaths of 69 protesters, allegations of corruption, and appalling behaviour from businesses. 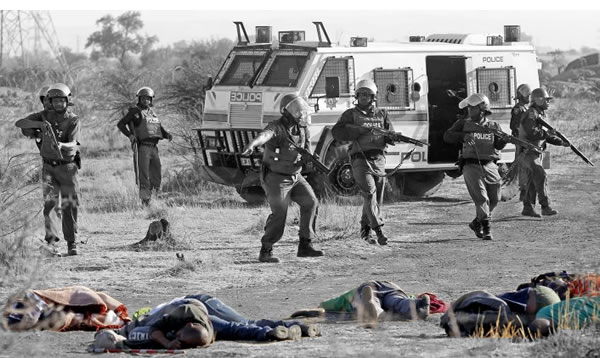 The African National Congress (ANC) marked the first 100 years of its existence in 2012. This proud milestone was marred by what is widely regarded as the modern day Sharpeville massacre, and resulted in chilling reverberations from the past.

In 1960, the South African police opened fire, shot and killed 69 black protesters in an internationally condemned act. There were many allegations the protesters had provoked the police and were to blame. The 21st of March, the day of the massacre in 1960, is a national holiday to recognise and pay tribute to those who laid down their lives for the freedom many in South Africa now experience.

It was therefore bitter news that in 2012, we are confronted with the massacre of 34 black protesting mineworkers, killed by the South African police, in August  this year, in Rustenburg, north-east of Johannesburg.

The ANC was invigorated in the 1940s by the passion, belief, commitment and dedication of Oliver Tambo, Walter Sisulu, and Nelson Mandela, and their liberation movement culminating in the overthrowing of the internationally despised system of Apartheid in 1994. The only surviving member of this trio, Mandela, is now ill in hospital aged 94, and the faithful around the world hopes he recovers.

Workers at the Lonmin platinum mine went on strike for better wages and eventually secured an increase of 22%. The cost was 10 people dead, including two police officers and two security guards, on the 10th August, and 34 miners shot dead by police on the 16th August.

There was international disbelief when, in the immediate aftermath, 270 miners were arrested and charged with the murders, although these charges were eventually dropped by the National Prosecution Authority, the state prosecutor. It was widely reported  South African police participated in creating an illusion tribal weapons had been used by the protestors on each other, by positioning these weapons next to the bodies of the killed miners.

Jacob Zuma and the ANC quickly came under suspicion of political interference in affairs of state prosecution. He also stood accused of gross insensitivity about the loss of life, and lack of solidarity with poor black workers. His subsequent announcement of a week of national mourning was regarded as a cynical gesture to placate a concerned international community. His lamentable actions led to dissent within the ANC, and calls for his removal from office.

The role of the two rival trades unions is also under examination. The National Mineworkers Union (NUM) threatened by newcomer Association of Mineworkers and Construction Union (Amcu), and this is seen as contributing to the unrest in the period immediately preceding the shootings.

Lonmin stands accused of exploitation of its 28,000 mineworkers. There are claims squalid living and working conditions are endured by the mineworkers, whilst Lonmin reaps huge profits.

Lonmin’s claims of significant investment in the community and families, and its package of support for bereaved families, was seen as meagre compared with its demands for the workers to get back to work shortly after the tragedy, in order to minimise lost profits. In the view of many, Lonmin bears a lot of responsibility for the tragedy.

When the dust settled, Zuma announced a Commission of Inquiry, which commenced on the 1st October, led by retired judge Ian Farlan. The Marikana Inquiry will look at the role of Lonmin and whether it acted to resolve the industrial dispute responsibly, or whether its actions contributed to sustaining tensions with the workers. The inquiry will examine the role of conflict between the two competing unions and whether their rivalry contributed to the incident. Lastly, the inquiry will probe the role of the police response.

An emergence of anxiety about the exclusion of the voices of the ordinary miners from the Marikana inquiry prompted sociologist Professor Peter Alexander, in collaboration with researchers Thapelo Lekowa, Botsang Mmope, Luke Sinwell and Bongani Xeswi, to write a book about the killings.

The book is the result of interviews conducted with the strikers, carried out on the mountain close to the massacre of 16th August. Entitled “Marikana, a view from the mountain and a case to answer”, the book offers the perspective of those who lived through the experience; on the other hand, the Farlan inquiry, the ‘official’ perspective, must deliver the truth and justice must be done, and be seen to be done.

Last week, the ANC conference opened, to give delegates the opportunity to elect the top leadership positions in the party, ahead of the 2014 election. It remains to be seen what impact Marikana will play in the outcomes of the leadership elections.

• Let’s hope the World Cup really was the beginning of a better future for South Africa – July 18th, 2010

• Will Cameron apologise for his visit to apartheid South Africa? – February 12th, 2010