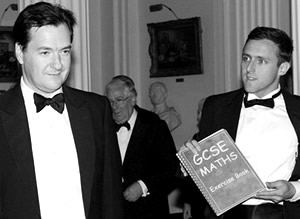 1. “To achieve cyclically-adjusted current balance by the end of the rolling, five-year forecast period”

His first rule turns out to be no constraint at all. At each budget and autumn statement, the chancellor risks getting rapped across the knuckles by the Office for Budget Responsibility if his fiscal plans do not envisage eliminating the current deficit in five years’ time. But there is nothing to compel him to actually deliver a current balance.

The rolling nature of the target means the date by which balance has to be achieved moves forward each year. George Osborne could just as easily adopt a target of being nice to Ed Balls on a rolling five-year time horizon. He would never actually have to deliver on the promise.

The chancellor has already taken advantage of the leeway provided by this rule. His first budget in June 2010 envisaged a cyclically-adjusted surplus on the current budget of 0.8% of GDP in 2015-16 (and of 0.3% of GDP in 2014-15, meaning the rule was met a year early).

By the March 2012 budget, the projection for 2015-16 had become a deficit of 0.7% of GDP and the first surplus was projected for 2016-17; but, despite the slippage, as the budget boasted: “The government remains on course to meet the fiscal mandate.”

The level of borrowing required to achieve this rule will depend on three other factors: the level of debt at the end of the preceding year (2014-15); the level of nominal interest rates; and the growth rate of nominal GDP.

Together these determine how much the debt ratio will increase (or decrease) before taking account of any new borrowing excluding interest payments (the primary balance). In the March 2012 budget, the chancellor targeted a primary balance in 2015-16 of 0.0% of GDP, which generated a forecast the net debt ratio would fall from 76.3% in 2014-15 to 76.0% in 2015-16.

The flexibility of the chancellor’s second fiscal rule is illustrated by the fact in his first budget, in June 2010, he planned to borrow a total of £322 billion between 2011-12 and 2015-16. By the time of the March 2012 budget, that figure had increased to £443 billion – and it would have been higher still were it not for a windfall of £28 billion from the transfer of the assets of the Royal Mail pension plan.

On an underlying basis, the forecast for net borrowing had increased by almost £150 billion in less than two years. Yet the 2012 budget also boasted the government’s policies were consistent with “meeting the supplementary target for debt in 2015-16”.

There has been speculation in the run-up to this week’s autumn statement the OBR might conclude the chancellor is no longer on course to meet his target for the debt ratio. Without any change in policy, this year’s poor economic growth and consequential shortfall in revenues has set government borrowing on a higher path. As a result, borrowing in 2015-16 could be higher than previously forecast, and high enough to mean the debt ratio increases in that year.

This appears to leave the chancellor with two unpalatable options to choose from: he could admit that he will miss his target, or he could announce a further squeeze on spending to get borrowing back on track.

The former would be personally embarrassing; the latter would allow him to save face but at the cost of taking more demand out of the economy when it is already weak. Rumours of a freeze in the level of Jobseeker’s Allowance and Income Support suggest he is leaning towards the second option. But there is a third – and better – response: get a new fiscal rule.

The fact a massive £150 billion increase in planned borrowing has been accompanied by a substantial fall in the rate the government pays to borrow blows a hole in the chancellor’s argument any conscious relaxation of the deficit reduction path on his part would lead to a loss of confidence in bond markets, and ultimately see the UK on the same path to fiscal ruin as Greece. Since June 2010 the 10-year UK government bond yield – the benchmark rate in the bond market – has halved from 3.5% to 1.75%.

Bond yields in the UK are not being determined by the current or prospective level of government borrowing. It is the outlook for growth, inflation and interest rates that matters, together with international developments. The message from the bond market is the government can borrow more when growth is weak and interest rates are expected to remain low for the foreseeable future.

The main lesson for the chancellor, therefore, is the fiscal rules should be more responsive to the economic cycle. His first rule targets the cyclically-adjusted current balance, so it does take some account of the state of the economy. But this is not enough. The extent of discretionary fiscal tightening should also be varied with the strength of the economy. When growth is weak – or even worse when the economy is in recession – discretionary tightening should be scaled back; when growth is strong, it should be speeded up.

This would increase the credibility of fiscal policy, compared to the current rules. Weak growth has meant the date by which the deficit will be eliminated has already been pushed back by two years at the chancellor’s discretion (and could be pushed back another year in the autumn statement). Having a set of rules that allowed for slower deficit reduction when the economy was weak would have the same effect, but the element of discretion would be removed. There would be no surprise for bond markets.

How might this work in practice? In the 2012 budget, the cyclically-adjusted current balance in 2011-12 was put at -4.6% of GDP, and cyclically-adjusted net borrowing at 6.4% of GDP. A reasonable plan might be to reduce borrowing by an average of 1.0% of GDP a year over the next six years (and by a further 0.4% in a seventh year).

Over this period, the cyclically-adjusted current balance would be transformed into a 2.0% surplus, so net investment spending – the difference between the two – never fell below 2% of GDP. But, in any year when the OBR is forecasting growth of less than 1½%, the pace of deficit reduction would be reduced; and in any year when it was forecasting growth of more than 3%, the pace would be accelerated.

Given the poor economic outlook for 2013 (the current consensus forecast is for growth of 1%), now would be a time when the chancellor could be scaling back his deficit reduction plans. This should be done in a way that is clearly temporary – such as a one-off injection of infrastructure spending or a temporary tax cut.

Calculations by the OBR suggest infrastructure spending is the best way to boost the economy in the terms of the boost to GDP for every £1 of spending. And tax cuts – in the form of a cut in the equivalent of employee National Insurance contributions – have been effective in supporting consumer demand, and thus GDP, growth in the United States.

What about the debt target? This should be dropped. There is no logic for having a target for just one year and real danger in having a target for the actual, as opposed to cyclically-adjusted, debt ratio. As we are seeing now, the implication is that if growth threatens to be weak in the run-up to 2015-16, pushing up borrowing to the point debt is expected to increase in that year, the chancellor has to either admit to missing the target or to cut spending, or raise taxes, despite economic weakness.

The projected peak in the debt ratio of 76.3% in 2014-15 looks large only in the context of recent experience. In the longer sweep of history there have been long periods when debt in the UK has been well over 100% of GDP. Ultimately, there will come a time when the debt ratio can be put on a downward path, so as to create room for an easing of policy in a future downturn, but that time is when the economic recovery is firmly established. This could be achieved, for example, by maintaining a level for cyclically-adjusted borrowing of close to zero once it has been brought down to this level.

That, though, is to try to determine what the appropriate fiscal rule should be at the end of the decade. For now, the priority is to have a better fiscal rule for the rest of this parliament. Ironically, for a chancellor who puts great store by the credibility of fiscal policy, the current rules seem designed to give little certainty to financial markets. A better policy would be to aim to eliminate government borrowing on a seven-year horizon, but to allow the pace of deficit reduction to vary in a pre-determined way according to the strength, or weakness, of the economy.