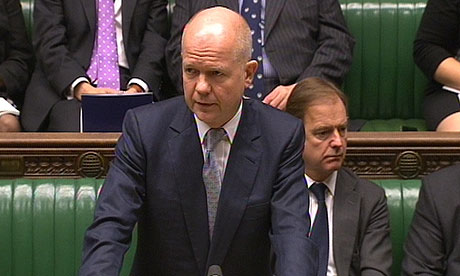 Britian today officially recognised the Syrian national coalition as “the sole legitimate representitve” of the Syrian people – with the foreign secretary refusing to rule out military intervention to save lives and act against the Assad regime.

“On the basis of the assurances I received and my consultations with European partners yesterday, Her Majesty’s Government has decided to recognise the National Coalition of Syrian Revolutionary and Opposition Forces as the sole legitimate representative of the Syrian people…

“A credible alternative to the Assad regime is emerging that has the growing support of the Arab League, the European Union, the United States and an increasing number of other countries; and we have an agreed basis for a transition in the form of the Geneva Communiqué which all permanent members of the United Nations Security Council signed up to in June.

“But the absence of that political and diplomatic solution, we will not rule out any option in accordance with international law that might save innocent lives in Syria and prevent the destabilisation of a region that remains critical to the security of the United Kingdom and the peace of the whole world.”

He had received the following assurances from the opposition:

“First, I urged them to commit themselves to developing their political structures, widening their support among all sections of Syrian society, and agreeing a detailed political transition plan for Syria.

“Second, I encouraged them to use the next Friends of Syria meeting, which we hope will be held in Morocco next month, to set out a plan for Syria’s future in detail.

“And third, I urged them to show a clear commitment to human rights and international humanitarian law, including the protection of all religious communities and unfettered and safe access for humanitarian agencies.”

In return, the foreign secetary pledged the following direct help:

“First, we will invite the Coalition to appoint a political representative to the UK, and we will offer support to them as they set up their political and humanitarian structures.

“Second, we will provide a £1 million package of communications support, which could for instance include mobile internet hubs and satellite phones to improve the Coalition’s ability to communicate inside Syria.

“Third, we will urgently deploy a Stabilisation Response Team to the region to work with the Coalition to develop its plan to meet people’s basic needs in opposition held areas and this team will draw up recommendations for areas for further UK assistance.

“Fourth and separately, My right honourable friend the secretary of state for international development is looking at increasing our assistance to Syrians affected by the conflict. This could include increasing our humanitarian medical assistance for wounded Syrian civilians by providing UK funding for hospitals and mobile clinics, and training for health workers. And we intend to launch new work to build on our existing work to support victims of sexual violence in Syria.

“This new package of UK support amounts to around £2 million of immediate commitments, and we will look to expand this considerably in the coming months.”

Earlier, Hague outlined the gravity of the situation:

“The whole House will join me in condemning the barbaric violence by the Assad regime, which continues its aerial warfare against Aleppo, Homs and Damascus itself.

“Thirty thousand people people have died already, and more than 100 are still being killed each day. Countless homes, clinics, hospitals and essential infrastructure such as water and sanitation systems have been destroyed or severely damaged and between 1 and 3 million people are displaced from their homes.

“There are appalling reports of rape and sexual violence by government forces and militia and as a form of torture in regime detention centres, which the UN Human Rights Council-mandated Commission of Inquiry has said could be prosecuted as crimes against humanity.

“And there are now well over 400,000 refugees in neighbouring countries. The impact on young Syrians is particularly acute, since 50% of all Syrian internally displaced people and refugees are children.”

Last week, the foreign secretary met opposition leaders in London, hailing the formation of the new Syrian opposition as “very encouraging”, and sayinh he hoped it would “mark a turning point”.