The UK will back Palestine's bid for non-member status at the United Nations tomorrow if Palestinian leaders agree to re-enter peace talks with Israel. 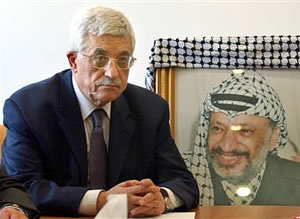 The UK will back Palestine’s bid for non-member status at the United Nations tomorrow if Palestinian leaders agree to re-enter peace talks with Israel.

Mr Hague is expected to use a statement to Parliament tomorrow to offer qualified backing for the Palestinians. In a major strategic shift in British foreign policy, the Foreign Secretary will say Britain would vote Yes if Mr Abbas agrees to re-enter talks with Israel without preconditions.

The UK is also calling on the Palestinians to ditch calls for the jurisdiction of the International Criminal Court to include Israel, which is opposed by the Israeli government. Failure to tweak their motion would lead to Britain abstaining in Thursday’s landmark vote.

With The Guardian adding:

Whitehall officials said the Palestinians were now being asked to refrain from applying for membership of the international criminal court or the international court of justice, which could both be used to pursue war crimes charges or other legal claims against Israel.

Abbas is also being asked to commit to an immediate resumption of peace talks “without preconditions” with Israel. The third condition is that the general assembly’s resolution does not require the UN security council to follow suit.

France’s foreign minister Laurent Fabius last night said it would back the Palestinian bid in the General Assembly, while Australia’s prime minister, Julia Gillard, was forced by a Cabinet and Parliamentary revolt to abandon the country’s opposition to the bid – it will now abstain. The US, meanwhile, remains opposed and will almost certainly veto any Security Council vote on full statehood.

In September, the European Council of Foreign Relations explored the reasons why Europeans should vote “yes” to Palestinian statehood at the UN, namely:

• Consistency: Europe has long supported a 2-state solution, and invested in this politically and financially (more than €1 billion a year);

• State-building: Europe has supported a Palestinian state building project that the UN, IMF and World Bank all say has met the benchmark of success. A UN vote would give this a political context;

• Values: European support for self determination and freedom in the Arab Spring would look insincere if it was followed by rejection of these same rights for Palestinians;

• Interests: Europe’s interests align with its values, and allow it to reset a regional role that encompasses crucial issues like security, proliferation, economic growth, energy and immigration – by doing the right thing on an issue that resonates powerfully with Arab public opinion.

The ECFR paper (pdf) also looks at some of the reasons why Europeans might vote against – distraction; a transatlantic rift; incitement to violence; “deligitimisation”; the ICC; unreality – and, in turn, points out some of the flaws and contradictions in those arguments.

If Europe does vote “yes”, Israel is likely to suggest, as it often has in the past, that it has ruled itself out of having a place in the peace process. Disregarding for a moment how relevant that is given the moribund state of the peace process, the opposite may anyway be true.

Europe might actually enhance its prestige and respect, not only in the Arab world but also in Israel, by taking a firm stance. Official Israel will not be happy, but it may be less dismissive of Europe. A consistent, assertive and unified European position is certainly better than the alternative – that is, being split, ineffectual and marginalised.

Both of the protagonists in the conflict will need dialogue with the nearest approximation that exists to a genuine friend to both. The Palestinians need someone to tell them that drifting into a showdown at the UN is no substitute for having a strategy for achieving real statehood; that donor-funded institution-building is not sustainable in the long term; and that there will ultimately be no real Palestine unless they can find a way to achieve national unity.

Israelis, on the other hand, need to be challenged to think beyond iron-clad US support and the sense that they have the Palestinians where they want them; and to reflect both on developments in the region and on the implications for their own society if viable Palestinian statehood becomes a practical dead-letter. In short, there will be much to be done in the aftermath of the UN vote.

But a Europe that has both voted “yes” and used that vote to mitigate the bitterness of the clash will be better placed to contribute.

We will have more on the Palestine UN “non-member” status vote later on Left Foot Forward.