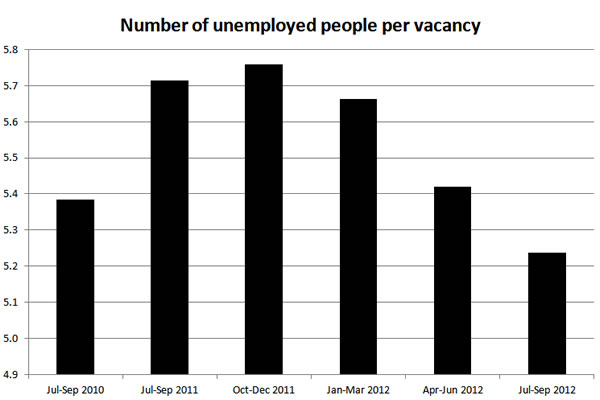 Today’s labour market statistics (pdf) are very encouraging. As Shamik has noted, employment in the three months from July-September was up 100,000 from April-June; unemployment was down 49,000; and working age economic inactivity was 25,000 lower.

Some of the other statistics I pay particular attention to each month also moved in the right direction.

Youth unemployment fell 49,000 and was below the politically-sensitive million level for the second month running. There were 37,000 fewer people unemployed more than six months (but 12,000 more without jobs for more than a year). The number of economically inactive people who want a job was down 54,000 and the number of redundancies fell from 150,000 in Apr-Jun to 128,000 in Jul-Sep.

One of my key labour market indicators, the ratio of unemployed people to job vacancies, has been coming down since the start of the year:

This is a national picture; in some parts of the country, the position is much worse than this:

One of the features of recent labour market changes has been that employment has risen more (half a million over the past year) than unemployment has fallen (a hundred thousand during the same period).

Employment gains have been heavily concentrated in London, and were again in the most recent quarter: It is clear the improved labour market headlines are more than a blip; in the latest figures there were 513,000 more people in employment than 12 months previously and all the main categories saw an increase:

A useful way to check on the reality of the increase in employment is to look at the figures for actual weekly hours worked, which were up, from 934.7 million in Apr-Jun to 945.3 million in Jul-Sep.

In the next chart, we take the employment level and average weekly hours at the start of 2008 as our starting point and then calculate each month’s figures as a percentage of that: During 2009-11, hours worked dropped more than the employment level: the headline figure was being held up by people working fewer hours. But both have been growing for a year and are round about their pre-recession positions.

With inflation (RPI) at 3.1 per cent in the most recent figures, average weekly earnings (regular pay) in September were up 1.9 per cent – yet another month in which average real pay has fallen: Falling real pay is bound to hit demand, which will feed through to slower growth.

The economy is likely to see a sustained, but slow, recovery over the next three years. The Committee attaches even less weight than in August to the possibility of a rapid pickup in growth.

A similar process produces the unemployment level. In the chart below, we can see there is still a net flow into employment in the latest figures, but there has been a reduction in the inflow and an increase in the outflow, producing a downtick in the net figure, after a period in which it constantly grew.

It is too early to say whether this is a blip or a trend, but it is worrying: A second straw in the wind is provided by the claimant count measure of unemployment, which rose by 10,100. This figure is produced a month ahead of the headline unemployment figure and it sometimes gives advance warning of what is about to happen.

These are very tentative indications, but they do suggest the labour market may be slowing down. Slow or falling growth is an even bigger worry, suggesting there are serious challenges ahead.

One Response to “Jobs stats are encouraging, but with poor growth, serious challenges lie ahead”