After the tenure of Dr Rowan Williams, his successor is an Etonian ex-oilman - but who is the real Justin Welby? And what does he believe? 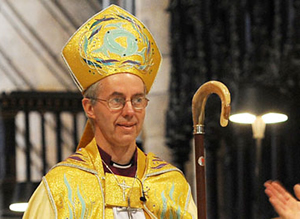 The appointment of Justin Welby, the Bishop of Durham, to become the new Archbishop of Canterbury is a somewhat bold move by the Crown Nominations Committee, which will no doubt be hoping he can capitalise to good effect on the experience gained during his 11 years as an executive of the Enterprise Oil Company.

However, as he prepares to take on what the Bishop of Norwich has dubbed the “impossible” job, Welby will be all too aware of the significant challenges he will have to confront during his time leading the church.

Whilst measuring faith can be a tricky business, there is little doubt Welby will inherit a country that, despite having an “established church”, is less Christian than it was, and a public life that is both becoming increasingly hostile to Christian involvement and less religious more generally.

Data from the British Social Attitudes Survey, published in September, found just 44% of people questioned said they felt they belong to a religion, down from 50% in 2010. But more significantly, 56% of those who claimed to be Anglican said they did not attend church on a regular basis.

Add to that the results published last year of the government-commissioned ‘Citizenship Survey’ which found 70% of the population said they were Christian in 2010, compared with 77% in 2005, and Welby will be inheriting a church needing to reassert its relevance in 21st-century Britain.

In particular, in the area of the church’s involvement in public life – with many high profile cases being brought against Christians wanting to more openly express their faith in their work life – the new Archbishop would do well to soberly consider the results of polling undertaken by Ipsos Mori on behalf of the Richard Dawkins Foundation earlier this year.

• 74% strongly agree or tend to agree that religion should not have special influence on public policy;

• 46% reject the idea of an established church compared to 32% who support it;

• 79% strongly agreed the Government should not “interfere” with religion;

• 60% of respondents said they have not read any part of the Bible, independently and from choice, for at least a year;

• 37% have never or almost never prayed outside a church service;

• 49% had not attended a church service over the past year, with the exception of special occasions such as weddings and funerals;

• Asked where they seek most guidance on questions of right and wrong, just 10% said it was from religious teachings or beliefs, with 54% drawing on their own inner moral sense; and

• 32% expressed a belief Jesus was physically resurrected, with 18% not believing in the resurrection even in a spiritual sense, whilst 49% did not think of Jesus as the Son of God.

But it is not just reasserting the Church’s relevance to people’s lives that will test Welby’s abilities. Most immediately, he will have to handle the fallout from a vote at a meeting of the church’s ruling body, the General Synodd, which will consider legislation on the ordination of female bishops.

Whilst a majority of dioceses have expressed support for the notion, there remains a significant number within the church who have suggested there is sufficient opposition to deny the required two-thirds majority, even for a compromise which would grant those who believe female leadership in the Church goes against the Bible’s teaching the right to have an alternative male bishop chosen “in a manner which respects” their theological convictions.

Welby will therefore need to summon all his diplomatic skills to provide leadership whilst maintaining as much unity as possible and remaining theologically sound.

On same-sex marriages, he could be a thorn in the government’s side, having previously expressed outright opposition to the proposals being pursued by ministers, a stance likely to garner much support amongst the ranks of Conservative backbenchers – though he today pledged a “re-think” on gay relationships, saying he will re-examine his opposition.

Having been dubbed by Christina Rees – a religious commentator and a member of the General Synod – as “a visionary and a strategic leader” who “is prepared to take risks” whilst remaining “extremely astute”, the papers seem to be fairly supportive of Welby’s appointment – albeit with caveats.

At The Guardian, pointing to the difficulties Rowan Williams faced in maintaining church unity, the paper’s editorial this morning notes:

“Aspects of the job are perhaps impossible, but there are paradoxical reasons to believe that Mr Welby just might have more luck. An evangelical conservative, he will not run up against the suspicion of the church’s reactionaries, as Dr Williams automatically did. And while doctrinaire in his doctrine, he is instinctively pragmatic in temporal matters.

“Thus his reading of the scripture inclines him against gay marriage, and yet he allowed the bells of Liverpool Cathedral to ring out Lennon’s atheistic Imagine after he grasped this would be a popular thing to do. He has a knack for persuading bickering elements to rub along, and without flinching from uncomfortable facts.”

The Daily Telegraph, meanwhile, says Selby could very well be the man to “pour oil on troubled waters”.

“As Dr Williams admitted in an interview with this newspaper, the multi-faceted nature of the office is difficult to sustain. Perhaps Bishop Welby, with his boardroom experience, can better handle these various responsibilities than his more scholarly predecessor. Certainly, his rapid ascension is an indication of how highly regarded he is by his peers. They must hope he can bring harmony to a Church whose bickering threatens to make it appear irrelevant.

“His biggest challenge will be to avert a schism at the next Lambeth Conference in 2018. To that end, he will need to be – as Dr Williams discovered – a tough and resilient character. Indeed, the cut-throat world of the oil business may look tame by comparison.”

At The Independent, however, the jury is out as to whether this is the right appointment, pointing to Welby’s previous stance on same-sex marriages as being a problem for the paper.

Whilst noting there is “much to applaud” in the appointment, its editorial explains:

“When it comes to gay marriage, however, he is a less promising prospect. Friends say he knows what he wants but does not always take the most direct route. So be it. But this is an issue on which the British public will judge the Church against criteria of equality and compassion, not theology.”

Finally, for the New Statesman, it is the new Archbishop’s Eton education that will cause problems for David Cameron, with George Eaton arguing:

“It appears likely, then, that Welby’s education was, if anything, a hindrance, but his appointment… will inevitably be cited by some as evidence of favouritism. It will also prompt further discussion about the state of social mobility in Britain.

“It’s notable that the prime minister, the Mayor of London and, now, the head of the Church are all Eton alumni. When was the establishment last so dominated by public school boys?”