Tony Dolphin examines the small amount of comfort which George Osborne can take from the recent borrowing figures. 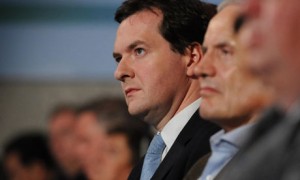 The latest public sector finances data, released today by the Office for National Statistics, make gloomy reading for George Osborne. Net borrowing in August 2012 was £14,410 million – the highest ever level of borrowing recorded for the month of August.

The small crumb of comfort was that borrowing was little different from last August’s figure of £14,365 million – allowing the ONS to present borrowing as unchanged at £14.4 billion. But borrowing is supposed to be coming down, and after five months of the financial year that is not happening.

Net borrowing between April and August totalled £61.3 billion (after excluding the one-off effects of the transfer of the assets of the Royal Mail pension plan to the government and the closure of the Special Liquidity Scheme, which together reduced borrowing by £30.3 billion). This compares with £48.4 billion in the same five months of 2011/12.

Based on the pattern of borrowing through the year in recent years, borrowing in 2012/13 is on course to hit around £120 billion. This would be little different from the £119 billion outturn for 2011/12, despite the favourable one-off effects that have reduced borrowing by £30 billion.

It would also be way above the Office for Budget Responsibility forecast of £92 billion for 2012/13.

When the OBR publishes revised forecasts for public sector net borrowing alongside the autumn statement in December, it is inevitable it will revise up its forecasts for future years, as well as for 2012/13.  As result, its central projection will be the chancellor will fail to achieve his target of reducing public sector net debt in 2015/16.

In the OBR’s March forecast, this target was achieved by a whisker: net debt fell from 76.3 per cent of GDP in 2014/15 to 76.0 per cent in 2015/16. It would only take an upward revision of £6 billion to borrowing in 2015/16 for the fall to be eliminated. With borrowing likely to overshoot by up to £30 billion this year, the revision is likely to be bigger than this.

That will leave the chancellor with an unpleasant choice: either he announces another round of tax increases and/or spending cuts to bring the borrowing projection down and so enable the OBR to forecast a reduction in debt in 2015/16; or he has to admit he will fail to achieve one of his two fiscal targets.

The first option would take more demand out of the economy at a time when growth is still very weak, and even a chancellor who has refused to acknowledge the part fiscal tightening has played in the UK experiencing a double-dip recession would shy away from such a move. So the target date for debt reduction will be pushed back.

Helpfully for the chancellor, Mervyn King, the Governor of the Bank of England, is helping to prepare the ground for such a move. In a recent Channel 4 interview, he even gave the chancellor his excuse, saying it is acceptable to delay debt reduction if the UK economy has been weakened by the poor performance of the global economy.

So, in his autumn statement, expect the chancellor to say the target of reducing the public debt to GDP ratio in 2015/16 has been pushed back by a year or two due to circumstances outside his control. But don’t expect him to acknowledge the pace of deficit reduction he put in place has itself led to weaker growth, sluggish tax revenues and much higher borrowing.

That would be too much to ask.