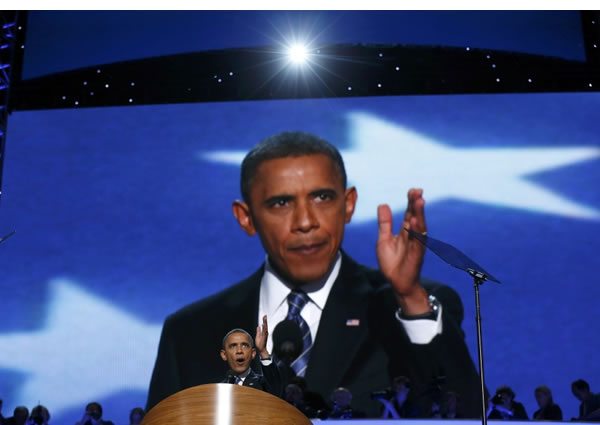 It is almost a truism that you campaign in poetry and govern in prose. This was reflected in the mood and tone of Barack Obama’s acceptance speech to the Democratic National Convention on Thursday. The message of hope was not gone but it was muted. His ask of the electorate was patience. More time was needed to rectify the inherited problems with the economy that had built up over decades.

Most importantly, he said the electorate faced a choice and a stark one at that. To a bunch of apathetic voters it is vital for the Obama campaign that this proposition is accepted and acted on. So what were the alternative paths facing Americans?

Obama put his leadership at the forefront of his case: he was tried and tested, the decisions he has faced were tough and he was the man to provide innovative solutions in a changing world.

The Republicans? Well their medicine was the same it had always been:

“Take two tax cuts, roll back some regulations and call me in the morning.”

This perhaps was one of the most eviscerating attacks on the Republicans. The Romney-Ryan ticket is yearning for a yesteryear and that is where their policies are rooted – the policies they’ve bothered to tell anyone about anyway. His other main prong of attack was the foreign policy naivety of his opponents. In what would be music to the ears of Britons he lambasted Romney for being unable to visit “our closest ally” without insulting them over the Olympics.

A picture was painted of the Republican team running for office as regressive, small minded and incapable of taking the tough choices facing America.

So if the Republicans meant going backwards, what did going forward mean? Obama told us he meant education, energy independence, national security and to cut the deficit, responsibly.

His America was one where everyone had a chance at the American dream regardless of their background. Education, he opined, was a gateway to a middle class life and he was on the side of aspiration. It should not be forgotten that despite the prosperity of America, public provision of education is often poor. Education could and should help level the playing field, not reinforce social division. Obama wanted to right this wrong.

Obama was also able to point to the impressive work of his wife and Dr Jill Biden on supporting military veterans and their families. Echoing the sentiments of Joe Biden who spoke earlier in the night, he attacked Romney for not having the decency to acknowledge the service of the military. Indeed it is odd that Romney, who seemed keen to stoke tensions with Iran and Russia, did not pay respect to this key group.

The path ahead is hard but it will lead to a better place, the President said, and he asked people to join him on that journey. He entreated people to vote. To ensure their voices would not be drowned out by those of lobbyists or the influx of corporate cash that has threatened to engulf the election.

His was a battle that was incomplete. One that Obama said he had the stomach to fight and the strategy to do so.

As I started my journey out of Charlotte having heard the speech, I wondered if people outside the stadium would be buoyed by this sober speech. My question was answered only a few blocks from the arena. A brass band was playing on the sidewalk and hundreds of people were amassed dancing around them. It was the most powerful sign that Obama’s presidency is not at an end. There is still hope. What could be more heartening than that?