Behind the headline figures, the employment situation continues to worsen for particular groups.

ONS figures show the economy shrank by a bigger than expected 0.7 per cent in the second quarter of the year.

The UK remained in recession, as real GDP has now contracted for three consecutive quarters.  There were two special factors that contributed to the drop in output: the poor weather (the second quarter was the wettest on record) and the extra Jubilee bank holiday.

But these only partly explain the drop. Underlying economic conditions remain fragile, and weakness was experienced across most sectors from manufacturing to financial services. Looking ahead, the economic outlook for the UK has worsened.

The IMF revised its growth forecast for 2012 down from 0.8 per cent to 0.2 per cent, as the euro zone crisis continues to deteriorate placing further pressure on the UK economy.

If Greece leaves the euro zone this could lead to a financial shock wave and a severe credit crunch affecting the entire region. 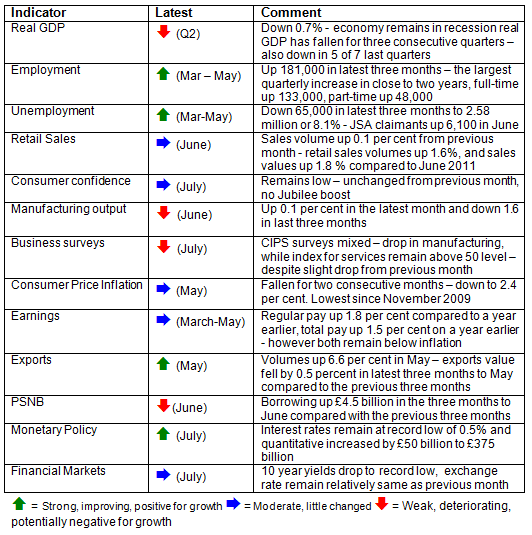 After the disappointing first quarter growth figures, which showed a decline in real GDP of 0.3 per cent, the Coalition and the Bank of England announced a series of measures in an attempt to boost growth. These included a further round of quantitative easing worth £50 billion (announced July 5th 2012) and the ‘Funding for Lending’ scheme worth up to £80 billion.

This scheme will see the Bank of England take assets from banks in return for cash, with the expectation that banks will use the money to make new loans. A third initiative revealed was the ‘UK Guarantees’ scheme, a plan to boost infrastructure investment up to £40 billion. The government plans to offer guarantees and loans to support exporters and new infrastructure projects that have had trouble accessing credit.

However, in its latest report on the UK economy, the IMF warns policymakers, and the government in particular, that they must do more to actively encourage growth if it is not on better footing by next spring.

The release of figures showing the UK economy contracted by 0.7 per cent in the second quarter – much deeper than expected – has led some commentators to suggest the government should act now and not wait until next spring.

In contrast to the output slowdown, employment continued its bounce back in the three months to May, with 181,000 more people in work than three months earlier. This is welcome news (and might be said to cast some doubt on the picture painted by the GDP data), But behind the headline figures, the employment situation continues to worsen for particular groups. For example, long term unemployment – those out of work for more than a year – continues to rise.

Additionally, there are now 1.4 million part time workers who say they want full time work – more than at any time since records began in 1992.

1. GDP down 0.7% in second quarter: The ONS released preliminary GDP estimate for second quarter of this year. GDP dropped by more than expected, with bad weather and Jubilee weekend partly to blame. 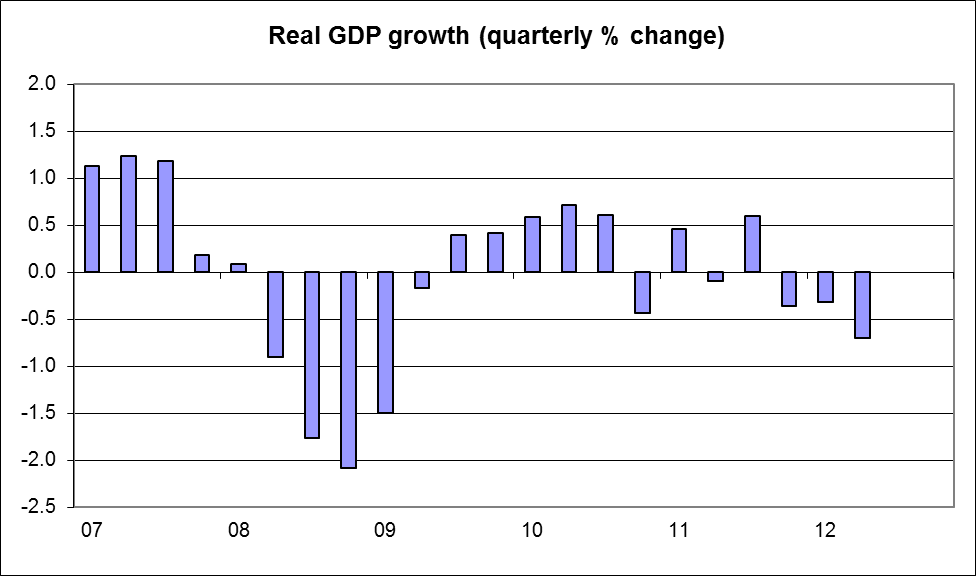 2.Employment up – Olympics creating temporary jobs: Employment in the latest three months, from March to May 2012 was 181,000 higher than in the previous three months. Olympics 2012 gave a boost to employment, as London figures up by 61,000 in the latest quarter. The number of employees working full-time was up 133,000 and part-time was up 48,000.

4. Retail sales up 0.1 percent: The volume of retail sales increased by a modest 0.1 per cent in June. Sales during this period were affected by bad weather and the Jubilee weekend did not give expected boost to sales.  Retailers pushed down prices in an attempt to attract shoppers. The estimated prices of goods sold between May and June 2012 fell by 1.3 per cent. Clothing sales volume rose by 2.5 per cent, while food sales volume down 0.7 per cent compared with May 2012.
5. Consumer confidence remains low: People continue to worry about the economic outlook, and their own incomes. Jubilee celebrations did not boost consumer confidence as hoped.

6. Manufacturing experiences unexpected rise: Underlying trend in manufacturing is unclear. Production rose between April and May by 0.1 per cent, however production fell 0.3 per cent in the latest three months compared with previous three months. There is a mixed picture of performance across subsectors.

Pharmaceuticals shrank by 3.9 per cent, while production of manufacture of food, drink & tobacco and manufacture of transport equipment industries rose by 2.2 per cent and 3.7 per cent respectively. Increases in food, drink and tobacco driven by good weather, and Jubilee celebration preparations. 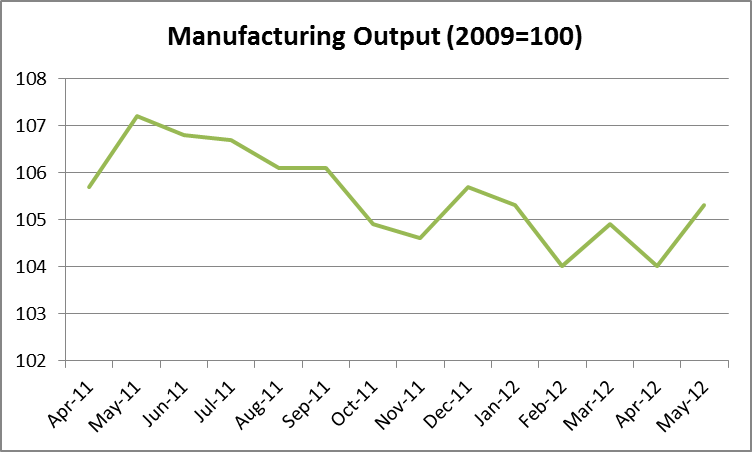 7. Business surveys: Business confidence in manufacturing contracted in July. Confidence is now at lowest level in over 3 years, and below the crucial 50 level, implying a drop in output. The Eurozone crisis is not offsetting poor domestic demand, as crisis continues to unravel. In contrast, confidence in services still above 50 level at 51 – but dropped slightly from previous month. Based on these surveys, the first indicators of economic activity in the third quarter suggest the economy remained weak.

8. Inflation continues to drop: CPI down to 2.4 per cent, fell from 2.8 per cent in April. Drop in prices for clothing & footwear, transport and food & non-alcoholic beverages contribute to drop in CPI. Inflation edging closer to Bank of England 2.0 per cent target.

10. Exports experience surprise boost, but outlook remains bleak: Total export volumes rose by 6.6 per cent in the latest month. However, trade data has been volatile. In the three months ending May 2012, exports fell by 0.5 compared to the previous three months. Outlook remains negative as euro zone crisis continues to deteriorate. 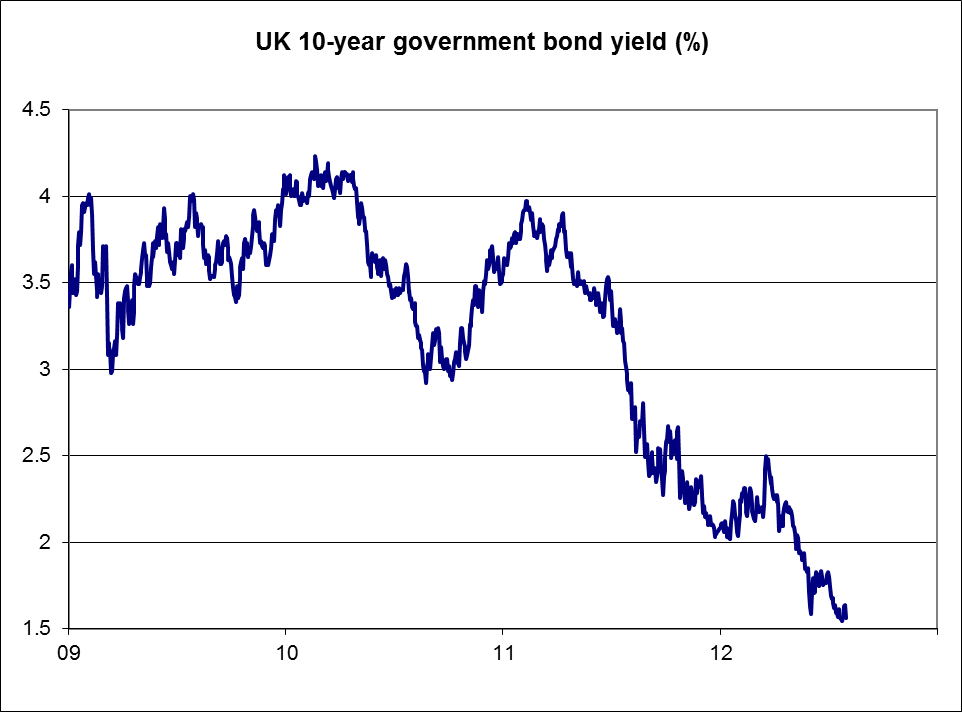 13. Government bond yields drops to historical low: The yield on a 10-year gilt bond yield continued to fall in July and is now at a historical low of 1.5 per cent. This continues the trend of low borrowing. Sterling has little changed in July – sterling was a little stronger against the euro, but the major currencies remain relatively stable.