Foreign secretary William Hague today reassured the Syrian people they were “not forgotten”, vowing to rid them of President Assad - with “no option ruled out”.

Foreign secretary William Hague today reassured the Syrian people they were “not forgotten”, vowing to rid them of President Assad – with “no option ruled out”.

He did, however, stress foreign military intervention “would require international agreement” and a “very large scale force”, and that “the best way of avoiding more massacres is to do everything we can to support peaceful transition”, though insisting a successful political transition “precludes Assad’s involvement”. 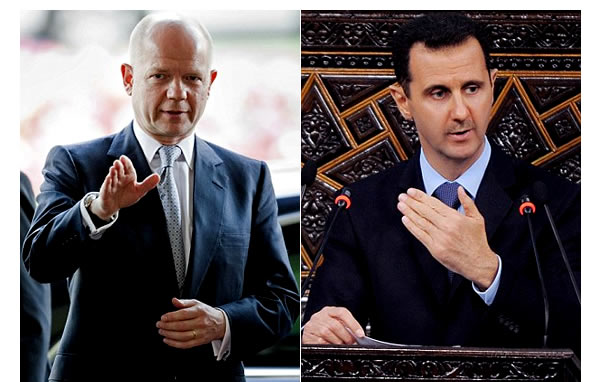 @WilliamJHague was answering questions on Twitter via #AskFS this lunchtime; here are some of the exchanges:

Mina Al-Oraibi: “As defections across Turkish-Syria borders increase, as so fears of clash, is imposing humanitarian corridor viable?”

EK McAlpine: “Why doesn’t Syria have grounds for humanitarian intervention?”

Hague: “No shortage of grounds. But no agreement on it at @UN and best solution for all is peaceful transition.”

Joel Bubbers: “For you is there any acceptable outcome in Syria that would involve President Assad retaining a leadership role?”

Hague: “No. #Assad clinging on would condemn any transition to failure & not be accepted by Syrians.”

Hague: “EU has an arms embargo & extended this to insurance which inhibited a Russian ship recently”

Musaeb: “Is Syria in civil war ? ‘No longer a revolution’.”

Hague: “It has characteristics of both. Sadly it is descending into civil war and situation becoming more urgent.”

Evakatrina: “Is the UK arming the opposition?”

Hague: “No. We enforce the EU arms embargo.”

Um Farouk: “why is the world wasting our lives with #Anan‘s plan when everyone knows #Assad won’t abide?”

Hague: “Annan plan best route to peaceful solution, if given full backing of Russia and China.”

Abdulwahab Omar: “Kofi Annan plan has had zero success yet you keep trying to revive it? Are diplomatic solutions failing?”

Hague: “They have failed so far but it is right to keep trying. All alternatives are much longer and bloodier.”

Olivia Williams: “What is the best possible outcome for Syria by now?”

Hague: “A transitional gov as agreed at Geneva supported by UN, and a peaceful transition to democracy.”

Raphael Levy: “Does the UK support the removal of Assad. If not, why? And if so, how?”

Hague: “We absolutely believe #Assad has to go. It would be in best interests of everyone as part of a peaceful transition.”

Marina More: “How do you plan to make real changes to the Syrian people without Russia or China? Is there any way round them?”

Hague: “Our strong preference is to work with Russia & China but if Annan plan fails no option is ruled out.”

Khalil Agha: “How longer would u wait for Russia and China to support any fair solution In #Syria. Average of killed civilians raised to 80 daily.”

Hague: “We’re working with them. We support stronger action by Friends of #Syria. If no progress made will seek strong UNSCR.”

Kristyan Benedict: “What UN presence would you like to see in #Syria post July 20? ie mandate & numbers.”

Hague: “Depends on whether any progress is made on #Annan plan. Sustainable UN presence requires cessation of violence.”

Niccolò Locatelli: “If Assad complies with transition plan, shares powers with opposition but does not leave would it be ok for UK?”

David Sketchley: “What gives the UK the right to interfere in affairs of sovereign states, considering UK’s systematic violations of international law?”

Hague: “We’re not. We’re standing up for #HumanRights, international law and rights of Syrian people.”

Allan Duncan: “Even if peace agreement is possible in #Syria what are the chances of stability within the country ever coming back?”

Noor: “The struggle has been going on for 16 months, when will the international community deem it necessary to intervene?”

Viresh Joshi: “How many more massacres will it take until the global community realises that the Annan Peace Plan hasn’t worked?”

Hague: “Hasn’t worked so far but best way of avoiding more massacres is to do everything we can to support peaceful transition.”

Kety Shapazian: “Sir, if you could send a message to the Syrian ppl suffering under Assad’s tyranny, what would u tell them?”

Hague: “You’re not forgotten. Tomorrow 100 countries meet in Paris & I hope they’ll agree to coordinate stronger action to help you.”

This morning, it was reported the foreign secretary will formally seek a UN resolution to remove Assad from Syria, calling for a motion under the UN Charter that can sanction the use of force to remove the Syrian President. He had earlier warned Russia there was “no point” in anybody standing by the Assad regime, telling Moscow the situation in Syria “is leading towards a collapse, to terrible and grave violence”.

Earlier this week on Left Foot Forward, we reported the scale of torture at the hands of Assad’s forces. As Mr Hague says, he can have no part in Syria’s future; by whatever means, the international community must remove him – of that there can be no argument.

11 Responses to “Hague tells Syrians “you’re not forgotten”, promising “no option is ruled out””