George Osborne again sought to lay the blame for the banking scandal at Labour's door today for lack of regulation - yet he had called for more deregulation.

George Osborne again sought to lay the blame for the banking scandal at Labour’s door today for the party’s lack of regulation when in government – the same George Osborne who repeatedly called for Labour to deregulate further. 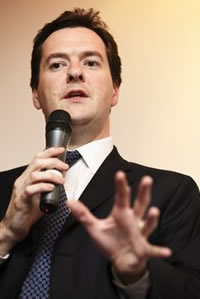 “I think it’s a very, very different era from a few years ago, I don’t think, actually, the Bob Diamonds of this world would have resigned four or five years ago, so, the world has moved on, the culture has changed, and the government has been part of changing that culture, but frankly, it has been driven by an overwhelming anger amongst the British people at this age of irresponsibility, irresponsibility in the banks and frankly a complete failure to regulate those banks that led to the crisis.”

Here’s a reminder of what the then shadow chancellor and his colleagues said whan Labour was in power, and, indeed, failing to regulate properly:

“I fear that much of this regulation has been burdensome, complex and makes cross-border market penetration more difficult.

“This is exactly the wrong direction in which Europe should be heading and it threatens the global competitiveness of the City of London.”

“In short, in an age that demands a light touch, he [Gordon Brown] offers that clunking fist.”

“I want to give you [The City] lower taxes and less regulation.”

“Light-touch… regulation is in the interests of the sector globally and the government need to send that message more strongly.”

• After the Barclays Libor scandal, how long must we wait for a public inquiry? 29 Jun 2012

• Miliband: Time for prosecutions, proper regulation and an end to the “casino culture” 28 Jun 2012

George Osborne: The man with the memory of a goldfish.