As Left Foot Forward reported last week, there are big fears racism, anti-Semitism and violence will mar Euro 2012, which kicks off tomorrow in Poland.

As Left Foot Forward reported last week, there are big fears racism, anti-Semitism and violence will mar Euro 2012, which kicks off tomorrow with co-hosts Poland taking on Euro 2004 champions Greece. 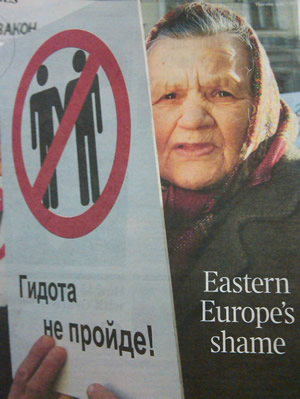 Yet the horror of homophobia in eastern Europe – alive and well in Russia as we reported earlier today – has not received nearly as much coverage. However, today’s Times (see Times 2 cover, right), has investigated the “shameful record on gay rights of Ukraine and Poland”.

Here’s some of what reporter Damian Whitworth discovered (£):

Last month the small, low-key gay community of Kiev attempted to realise their modest ambition of holding the Ukrainian capital’s first gay pride event. They tried to keep the final location of the march a secret but somehow it leaked to ultra-conservative thugs intent on violence.

The gay group reluctantly accepted the police recommendation that they cancel the parade, but the bigots still found them.

As the gay rights campaigners talked to journalists they were attacked, first with pepper spray and then with fists and boots. Television footage shows Svyatoslav Sheremet being kicked and then jumped on as he lies on the ground. As his attackers flee he stands up to reveal his smashed, bloodied face…

Just how socially different Ukraine is compared with liberal western European countries becomes clear after about half an hour of talking to Andriy Maymulakhin in a hotel bar in Kiev. Maymulakhin is a Ukrainian gay rights activist and tells of life for gays and lesbians in his country.

His story is depressing and sometimes alarming, but perhaps the most extraordinary insight comes when I innocently ask who are the well-known gays in Ukraine. He smiles wryly and gently explains that I have failed to understand the reality of life in his country. “We do not have any openly gay public figures,” he says. “No one.”…

A man called Sergei met a man online and went to meet him. He was introduced to four friends of his new acquaintance. They taunted him about his sexuality and then beat him, knocking out his front teeth, breaking a rib and dislocating an arm.

Last year another man, Nikolay, found graffiti on the wall close to the entrance to his home: “Kill the gays who live here.” A similar inscription appeared on his front door. Two weeks later two of his neighbours beat him up while shouting obscenities about his sexuality. In these cases and others, according to Nash Mir, the police failed to properly investigate.

Lech Kaczynski, the president of Poland who died in a plane crash in 2010, was notorious for claiming that the promotion of homosexuality could lead to the destruction of the human race. According to Juris Lavrikovs, of ILGA-Europe, a Brussels-based LGBT campaign group, attitudes have improved in Poland – the co-host of Euro 2012. He sees the country as an example of how attitudes can change. Poland has an openly gay MP and a transsexual MP.

Nevertheless, one nationalist group still uses a crude homophobic logo – a cross through copulating stick men – when it attends protests. Last year’s gay pride event in Krakow was attacked by a group of about 150 people; a recent gay pride event in Warsaw passed peacefully but had a huge police presence.

Some protesters there came from Belarus and carried a banner that read: “It’s better to be gay than a dictator” – a reference to a comment by President Alexander Lukashenko about Guido Westerwelle, Germany’s gay foreign minister: “It’s better to be a dictator than gay.” The authoritarian Lukashenko has been frank about his attitude, saying: “I don’t like gays.”

And on attitudes in eastern Europe in general, he concludes:

Why this deep contempt of gay people across eastern Europe? “Other European countries did not have those 70 years of the Soviet Union,” says Anna Dovgopol. During those long, dark years homosexuality was illegal and repressed. It is taking a long time to shake off the attitudes that became ingrained then. Furthermore, when freedom finally came, the search for identity took people in different directions…

For some gay people life in eastern Europe has become so intolerable that they have left. In a Soho café I meet Maris Sants, a former pastor in the Latvian church, who knew he was gay from the age of 11. He believed that made him a criminal, as legally it did at that time, so he turned to Christianity because God “accepts even criminals”.

After he came out he was driven out of his Lutheran church but could minister to gays at an Anglican church in Riga. He also helped to organise the first gay pride event in Latvia.

One day, on the way to conduct a baptism, two men ambushed him. He escaped into the church. “I realised: I couldn’t live in this city.” He came to London and retrained as a psychotherapist. The café where he works has more than 50 gay and lesbian Latvian customers. Sants plans to stay in Britain. “I am safe here. I can’t go back. I still have nightmares about it all. I still can’t recover from the shouting. If anyone shouts now I just tremble.”

As with racism, though, England is not short of homophobes of its own, be they in politics or the media or society at large – and especially in football, which may explain the lack of press coverage of this issue, and the lack of concern, vis-a-vis racism, from the authorities, from players, and from fans.

There may be no “openly gay public figures” in Ukraine, but in Britain, though there are openly gay rugby players and cricketers, there are no openly gay footballers. Not one.

If you were a professional footballer who also happened to be gay, would you come out? Maybe you could handle the knuckle-draggers screaming abuse from the terraces or committing a variety of sins against grammar online. Maybe you couldn’t give the tiniest of shits what your team-mates think of your lifestyle choices.

But if you were the kind of person for whom their sexuality is a part rather than the entirety of your existence, could you really cope with being no-longer a footballer but a ‘gay footballer’ – patronised at every turn, every personal achievement undermined? Your first goal would not be your first goal but instead be the first goal scored by a gay, same with your first own goal, winners medal etc. etc.

Max Clifford claims he knows of current top level professionals whom he has advised to keep their sexuality secret. Now hopefully the majority of us are intelligent enough to disregard most of what that self-publicising buffoon spouts, but much as it hurts to admit, he’s probably right.

Most of us would rather that what happens (or doesn’t happen) in our bedrooms remains between those intimately involved, although if hooking up a webcam and broadcasting the details to everyone watching is your ‘thing’ that’s fine too.

The thought that by revealing your sexual preferences – be they in regards to gender, whips, asphyxiation, whatever floats your boat – would mean you would be front page on every paper in the land would probably terrify most people. Add in the knowledge you would be the victim of mass verbal abuse, probably lose the trust of colleagues and change the definition of who you are, then it is no wonder that if there are any gay footballers they’re certainly not letting us know.

We claim we are ready for a gay footballer, when really all we want is to pick up our morning paper and read ‘football star in GAY sex romp.’

Safer in the closet? Sadly.

Like racism, homophobia is alive and kicking in football – the only exception being that, save for the odd summit, from which there appears to have been no follow-up, in reality no one in football, from the FA down, seems willing to talk about it, combat it and act against it.

43 Responses to “You know all about the racism, now read about the homophobia in the Euro 2012 hosts”