George Irvin ponders whether newly-elected French President Francois Hollande will be able to turn France around, much less the entire eurozone. 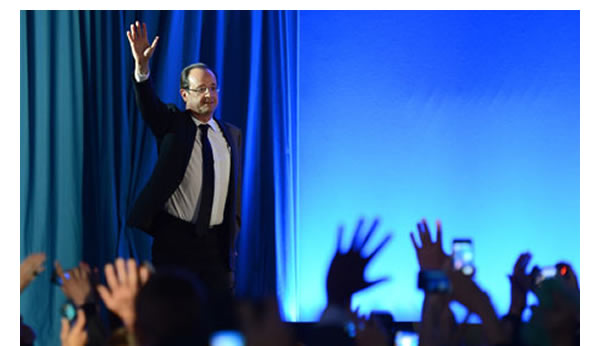 At the moment, the EA is stagnating, unemployment is rising and the entire banking system is dangerously fragile – in Nouriel Roubini’s phrase, we are watching a slow motion train wreck. How far genuine change is possible depends essentially on three factors: the reaction of the financial markets; how Hollande manages the new relationship with Germany and, more generally, whether ‘austerity’ is ditched and the EA goes for growth.

How will financial markets react to a socialist government in France? The knee-jerk reaction is to invoke Mitterrand’s experience in 1981-3 when financial turbulence forced the social-democratic left to change course within two years and into ‘cohabitation’ within five.

What is easily forgotten is that Mitterrand’s policy failed largely because inflation rocketed to double figures in 1983, a phenomenon unlikely to be repeated today.

True, Hollande has committed himself to a number of policies which will prove difficult to deliver: Generating growth and reducing unemployment and ‘sanitising’ public finances – significantly reducing the budget deficit over the next five years.

Equally, his rejection of Angela Merkel’s ‘Stability Pact’ – the pact requires a legal commitment to budget balance on the part of signatories – appears to put him on a collision course with Germany.

Nevertheless, a number of factors suggest Hollande’s government may succeed. For one thing, it is increasingly obvious that deep expenditure cuts lead back to recession, making unemployment and public indebtedness worse – as we see in Greece, Portugal and Ireland and will soon see in Spain too.

The message is simple: in a recession, fiscal rectitude is achieved through state-led growth – it is higher national income that generates higher savings, not the other way around. Even the IMF appears to agree.

For another, the Treaty is deeply unpopular – and not just in Greece, Portugal and Ireland. In Italy, prime minister Mario Monti has made it clear he thinks it foolish and that jointly-backed eurobonds constitute a better solution; Belgium’s Guy Verhofstatd agrees and even European Commission President Jose Manuel Barroso appears to support this position; while new Spanish prime minister, Mariano Rajoy, has already warned Spain will not meet next year’s fiscal targets.

In demanding the Treaty be changed, Hollande will have the support not just of the EA periphery but of some of its major players and many of its economic experts. One should bear in mind poll indications for Italian Parliamentary elections to be held next spring suggest a centre-left coalition will emerge.

Whether the Germans and their right-wing Dutch and Austrian allies could long hold out against a majority of the larger EA economies is doubtful. Federal elections must be held in Germany before next September; the polls point to the SPD entering power, and the right-wing Free Democrats (FDP) being annihilated.

There is a new twist too. In anticipation of the changed political conjuncture, Hollande and Merkel have finally agreed on the details of a Euro Area transactions tax (a form of ‘Robin Hood’ tax). A 0.01% tax on all financial transactions – approved by European Parliament 10 days ago – would raise €120 billion per annum, providing the financial basis for launching a huge EA infrastructure investment programme.

Merkel knows she needs to avoid market panic if Hollande wins, and further details of the new growth plan can be expected this week. In short, Sunday’s election result is crucial not just for France but for reviving Europe’ economic and political fortunes. Watch this space.

72 Responses to “Will President Hollande be able to turn France – and the Euro Area – around?”