It was a proud moment in the history of Indian democracy when its parliament convened a special session yesterday to mark the 60th anniversary of the first sitting of the Indian Parliament.

The luminaries at the time included Rajendra Prasad, S. Radhakrishnan, Jawaharlal Nehru, Sardar Patel and B.R. Ambedkar – the architects of modern India. Has the functioning of Parliament in the last 60 years, though, been able to foster democratic values and strengthen participatory institutions down the line? Perhaps not. 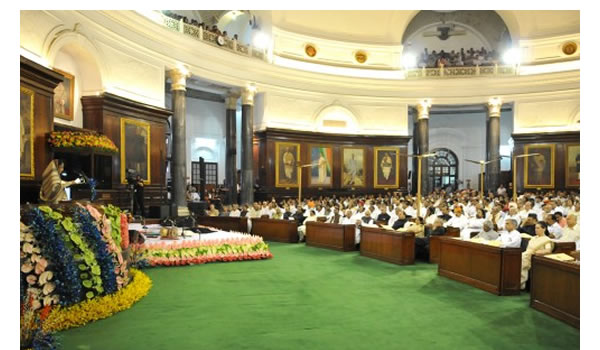 Democracy in India was ‘doomed to fail’ was the prediction of Winston Churchill, who very arrogantly said:

“The natives were not fit to govern themselves and would soon fall back quite rapidly through the centuries into the barbarism and privations of the Middle Ages.”

He has surely been proved wrong. India is a thriving democracy and is making progress on all fronts. It is predicted the country will be one of the economic superpowers of the 21st century; certainly, India is fast ascending the ladder to superpower status, blessed with both natural and human resources.

Sadly, however, her mode of functioning is fast becoming a laughing stock and risks giving credence to Churchill’s fears.

Over the past six decades, bureaucratic and political corruption – indeed the very criminalisation of politics – have converged and conspired to weaken the roots of Indian democracy. India’s parliamentary system has failed to live up to the aspirations of its founding fathers. As many as 100 members of the current parliament (out of a total of 543) have serious criminal records.

As Shamik Das wrote on Left Foot Forward previously, in the June 2009 Indian general election, the most recent in the republic:

• 17 have been charged with murder;

• 19 have been charged with attempted murder;

• Of the 64 candidates standing in the September 2009 by-elections, 15 have charges of murder and attempted murder hanging over them.

It is worrying that India, described as “the world’s fastest-growing democracy” lacks a truly accountable political process. Undoubtedly the country is advancing on the economic front, yet this contrasts uncomfortably with the erosion of basic democratic values. Corrupt practices have infiltrated all walks of life: government functionaries, judges, lawyers, engineers and even doctors are seen as corrupt.

Criminality and dubious wealth combine to send to parliament men and women who are demonstrably unfit for public office. Over the past six decades, the four pillars of democracy – the legislature, judiciary, executive and the press – have all developed serious problems in India. The rule of law stands subverted and moral values seriously eroded. The civil rights of women and children suffer blatant violations.

The breadth of the divide between the “India of light” and the “India of darkness” is dramatic, shocking and ever-widening. People in urban areas – the rich, the middle classes and the educated – have all benefited from the country’s economic growth. The ones who have missed out include the small farmers, the rural poor and the artisans.

For this section of Indians, the situation has actually worsened. According to World Bank estimates, 456 million people – little more than 40 per cent of India’s population of 1.2 billion – now live on less than £1 per day, the sum recognised as the international poverty line. Almost half of India’s children are malnourished; 1,000 die from diarrhoea every day; hundreds of millions have no access to proper sanitation.

Despite the widespread perception that Indian politicians and bureaucrats are among the most corrupt and incompetent in the world, successive governments have not lifted a finger to bring about even minimum reforms to the country’s political and administrative systems. Newspaper owners and managers are known to strike deals with corporate bosses to give them favourable coverage through “paid news”.

India faces a number of internal and external challenges: in particular, the impact of the global economic slowdown and the tensions and instability in Pakistan, Sri Lanka and Nepal. India’s broken infrastructure, decaying cities, child malnutrition and appalling education and healthcare need fixing.

The cancer of corruption has infected the whole nation.

Three public institutions – the police, the judiciary and the electoral system – need radical surgery. Otherwise, if corruption is allowed to sustain itself in the system of governance, combined with the climate of economic hardship, with high food prices and rising unemployment, could become a catalyst for political turmoil of the sort seen elsewhere in the world, with even more serious consequences not only for India but for the rest of the world.

The world’s “fastest-growing democracy” marches on, but the soul of India is crying for redemption. With the gap between the haves and have-nots widening, there is a sense of frustration among the diminishing tribe of honest Indians which is ready to explode.