In the US, commentators are now warning of the next group of loans that seem reckless and ready to collapse that could lead to the “the next financial crisis”.

In the US, commentators are now warning of the next group of loans that seem reckless and ready to collapse that could lead to the “the next financial crisis”. 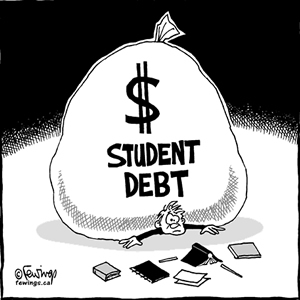 Here are the figures:

• The debt burden an American has taken on has more than doubled in the last five years, when credit card debt has actually dropped;

The loans for this group are completely unsecured and are only based on the promise of future earnings.

So what is this latest consumerist throwaway good these profligate Americans are gorging themselves on at the risk of destroying not only their own, but their country’s future? An education.

The mix of federal and private student loans in the US have created “a bewildering maze of programs and options” (see Archibald, Robert B, 2002: Redesigning the Financial Aid System: Why Colleges and Universities Should Switch Roles with the Federal Government; Baltimore, MD: The Johns Hopkins University Press) whose combined debt has created a generation of “wage slaves”.

It has become a major matter of social strife as shown by it being a major grievance for the US Occupy Wall Street protestors with President Obama last October having to step in with promises of relief. However, if as widely suggested the interest rate on the federal provided loans is doubled by Congress on the July 1st, the fear is the system may go into a default meltdown.

Now, wondering what the implications of the above are for our own education system here in the UK, well the comparision is truly frightening: the student loan burden now smothering the US student is calculated on average to be $25,250. With the changes the UK Coalition government has implemented it is estimated the average student in the UK will leave with a debt of £53,000 or $85,000 – three times as much.

It is not often we are given a window into the future, but the US education crisis gives us just that: if a country with a higher GDP per capita sees the student loans on its young as being unsustainable, how can we in the UK expect our young to carry potentially three times the load?

The cross party principles enshrined in the 1963 Robbins Report that government was to provide the structure so that university places “should be available to all who were qualified for them by ability and attainment” is being broken with the paradigm shift of education being seen simply as a personal commodity to be brought and is something we can regret at leisure.

That we pawned our (not perfect, but envied) university system for a commoditised education culture that will create unsustainable debt will be an educational lesson from the US that may reach us just a little too late.