SNP leader Alex Salmond and the Liberal Democrats have been implemented in the Frederic Michel/James Murdoch Leveson Inquiry emails.

As the leader of the Scottish Liberal Democrats, Willie Rennie, accused SNP leader Alex Salmond last night of being prepared to call Jeremy Hunt to “smooth the way” for News International to take over BskyB, the  mass of emails published by the Leveson Inquiry between Frederic Michel, News Corp’s Director of Public Affairs (Europe), and James Murdoch, suggests an as yet unidentified Lib Dem was prepared to make the case for the bid to Vince Cable, then the Cabinet minister responsible for making the decision over the bid. 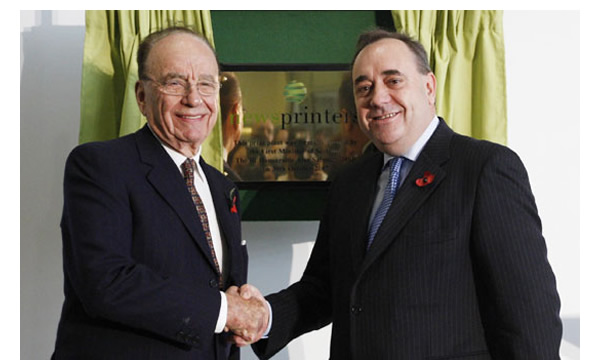 “Libdem MP, former Sky employee, with major Sky customer centres in his constituency and around will contact Vince Cable to ask him to bear in mind the economic/ investment point of view rather than getting influenced by political games, especially in times of austerity and very difficult economic environment for those areas. He will also emphasise the opportunity for Cable to show the maturity of the LibDems as coalition partners, working for the long-term, and will draw from the Coalition government experience lib-dems have had in Scotland. He agrees with the need for this to be looked at by Brussels rather than scrutinised again on plurality ground in the UK.”

It is within this email that Alex Salmond first gets a mention, with Michel continuing by explaining:

“Alex Salmond is very keen to also put these issues across to Cable and have a call with you tomorrow or Wednesday.  His team will also brief the Scottish press on the economic importance of News Corp for Scotland.”

“He will call Hunt whenever we need him.”

And on March 2nd, just weeks before the elections to Holyrood, Michel told Murdoch (p.102, pdf):

“Alex Salmond called. He had a very good dinner with the Editor of the Sun in Scotland yesterday.

“The Sun is now keen to back the SNP at the election. The Editor will make his pitch to the Editorial team tomorrow.

“Alex wanted to see whether we could help smooth the way for the process.”

“He also asked whether we could go for dinner at Bute House before the election campaign kicks-off on the 22nd March.

“On the Sky bid, he will make himself available to support the debate if the consultation is launched.”

On the 19th of April 2011, the Scottish Sun formally urged voters to support the SNP in elections to the Scottish Parliament.

Writing of a meeting with George Osborne’s Chief of Staff, Rupert Harrison, Michel suggests Harrison was advising News International how to strengthen its case to take ownership of BskyB.

“He was very much taken by our commitment to Scotland and Alex Salmond’s desire to support us. He thought it was a strong ally to put forward, very contrarian/unexpected. Same for Scottish lib-dems.”

In his evidence to Leveson yesterday, though James Murdoch declared there had been no quid pro quo seeing The Sun supporting Alex Salmond in return for support for News International’s BskyB bid, he did go on to explain:

“Mr Salmond… said that he thought that this might be a good transaction for Scotland.”

Regardless of Murdoch’s denial of a quid pro quo, however, Salmond’s opponents have reacted with fury at the developments and called for answers to some fundamental questions about who did what when and for what reason.

Whilst Lib Dem leader, Willie Rennie, called on the first minister to “explain his actions” to MSPs and urged the establishment of a formal inquiry, Scottish Labour leader Johann Lamont declared:

“Now we know how Alex Salmond operates. This stinks. It is my hope that the Leveson Inquiry now calls Alex Salmond as a witness.

“No one should make any mistake. Salmond wasn’t acting in the interests of Scotland. He was making a deal with one of the most discredited companies in the world entirely in Alex Salmond’s interests.

“The first minister claimed to have released all correspondence between himself and News International earlier this year. Now we know there were much more worrying conversations he is trying to keep quiet.

The Scottish Conservatives, meanwhile, seemed to show little signs of contrition given the heat Jeremy Hunt, one of their own, now finds himself in at Westminster.

“What has emerged… is that Alex Salmond was happy to hawk himself around as a lobbyist on behalf of the Murdoch empire in return for political favours. It is conduct unbecoming of a first minister, which has become all too familiar.”

In a statement issued by the Scottish government, a spokesman for the first minister said:

“These references, in a handful out of hundreds of emails, represent internal chatter from within News International.

“Indeed, James Murdoch categorically rejected such claims in his evidence to the inquiry, and the proof of that lies in the fact that the first minister has never spoken to or corresponded with Jeremy Hunt on this issue.

“The first minister was invited some time ago to give evidence to the Leveson Inquiry, and has already accepted the invitation. He looks forward to attending and to reiterating these key points to the inquiry.

“The first minister has certainly discussed News Corp’s operations in Scotland with James Murdoch, and it would be extraordinary if they had not done so given the fact the company employs many thousands of people here.”

25 Responses to “Leveson: Salmond and the Lib Dems implicated in Murdoch emails”