Would the UK and the planet be better off with a third runway at Heathrow and a Labour government with Ed Miliband still at Dept. of Energy and Climate Change?

Andrea Giesecke is a research assistant at the Fabian Society

Would the UK and the planet be better off with a third runway at Heathrow and a Labour government with Ed Miliband still at Department of Energy and Climate Change? 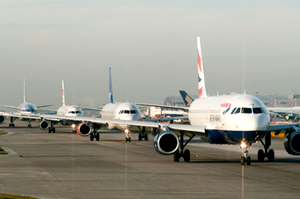 This was a question posed to Joss Garman, Greenpeace spokesman and anti-Heathrow expansion campaigner (and, of course, a Left Foot Forward writer) at a Fabian Society environment and citizenship conference last week.

Garman just about stopped short of answering yes. He did this by using his answer to list all the terrible things the coalition has done on climate and the wider environment agenda.

Garman went as far as to call last week’s budget the most terrible budget in history for the environment. Greenest government ever didn’t even get mentioned. Ouch.

Back in the golden age of 2009, when Miliband was heading up the Department of Energy and Climate Change (DECC), the third runway dominated environmental debates in the UK. Miliband famously clashed with Gordon Brown at Cabinet over this slab of concrete in West London.

Refusing to see UK ambition on climate mhange put at risk, Miliband secured a set of conditions that would be put in place along a third runway.

• Heathrow: The whirlpool of uncertainty is playing to the aviation industry’s advantage 26 Mar 2012

These included a ’green slot’ policy, which would have seen the runway only used by the newest, most efficient planes. The runway was also accompanied by a target for the UK that would see the industry’s emissions lower in 2050 than they were in 2005. Miliband called this ’constrained expansion’ for aviation with further measures on noise and air pollution that would have made Heathrow the greenest airport in the world.

Greenest in the real sense, not in the coalition sense.

Of course, Labour lost the 2010 election and thetThird runway plans were abandoned by the coalition government. Now, in classic Cameron u-turn style, suddenly aviation capacity in the South East is a problem that needs to be solved. The third runway is on the menu once again, but this time without Ed Miliband in government.

At the time, what looked like Labour selling out the environment was actually a fine example of pragmatism and realpolitik characterised by negotiation and compromise. Labour demonstrated it understood the difference between carbon emissions and local environmental airport impacts, agreeing to measures that would address both of these things.

There are no guarantees we’ll see anything like the same conditions attached to a third runway this time (or indeed any other expansion in the South East).

This illustrates a key difference between Ed Miliband and David Cameron. On the third runway, Ed Miliband got on top of the detail, understood the competing and at times contradictory goals of different stakeholders and then engaged in an exercise of negotiation and compromise to arrive at a strong policy position.

David Cameron used the controversial nature of the debate to position himself as a committed green activist and then performed a complete u-Turn.

The salt in the wounds of those environmental campaigners who once trusted David Cameron is to be found in the revelation that the prime minister hosted Michael Hintze, the funder of climate sceptic think tank The Global Warming Policy Foundation, for dinner in return for donations to the Conservative Party.

Forthcoming research by the Fabian Society shows the public wants growth in the aviation sector to create jobs and help kickstart the economy. But the public also wants strong action on climate impacts from flying. To square this circle, we need a sensible and grown-up debate about the future of aviation in the UK. This requires both the industry and politicians to take responsibility in facing up to the challenge of sustainable aviation growth.

There is a chance that all stakeholders may have cause to look back at 2009 with a sense of regret and missed opportunity. Or an a more positive note, perhaps another reason for replacing David Cameron with Ed Miliband at 10 Downing Street?

27 Responses to “Heathrow third runway: Was Ed Miliband right all along?”