Last week’s manufacturing survey conducted by the Engineering Employers Federation (EEF) and business advisors BDO LLP provided a small chink of light in the gloomy tunnel that faces the UK in turning round the economy. 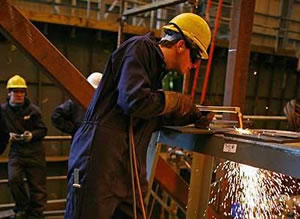 The coalition’s oft stated ambition to rebalance the economy is still trashed and looks an epoch away: David Cameron and George Osborne still don’t get the need for a robust and interventionist manufacturing strategy.

The report stated that although output and orders were recovering and investment plans have held up, any new found confidence was still to translate into investment that will drive growth.

“The confidence shown in our survey again demonstrates the resilience of manufacturing in the face of a changing global outlook.

“But while this is feeding through to a continuing willingness to recruit and invest, there is still more that needs to be heard from government to ensure this investment proceeds and generates much needed growth.”

Much of the optimism is being generated by the recent news in the automotive industry at Nissan and JLR, as BDO LLP’s Tom Lawton said:

“The ongoing fragility in UK and European banking systems and economies and the lack of access to capital for SME’s continue to present longer term challenges for the sector.

“It is important to the overall recovery of manufacturing and the UK economy for the government to recognise the opportunity that improving sentiment in the sector presents and to do everything it can to support and nurture this growth.”

• Obama puts manufacturing top of the agenda – time for Cameron to do the same? 27 Jan 2012

• A new strategy to help save UK manufacturing 5 Dec 2011

Speaking at the EEF’s Manufacturing Conference in London, Ed Miliband set out a strategy that has been called for by unions such as Unite for the last year. The speech set out policies to defend and support UK manufacturing including the need for a strategic investment bank; help and assistance to SMEs; a proper government procurement policy; and investment in skills, research and development.

One passage summed it up:

“To work, an active industrial strategy must have real vision, real drive right across government. And I don’t think the Government gets it. From Sheffield Forgemasters, to Bombardier, to BAE Systems, I think they’ve let British business down. They’re still wedded to the old rules which say government should get out of the way.

“A proper industrial strategy cannot become a reality if other parts of government act as a roadblock to this approach.”

The media of course focused on the ‘Made In Britain’ theme and some tried to link it to the late 1960s and early 1970s ‘I’m Backing Britain’ and ‘Buy British’ campaigns. But what Miliband was making clear was this was about recognising the government has a duty to stand up for UK-based manufacturing, whether that be British or foreign owned.

What he also said in an answer to a question I put to him that was that we should look to countries such as Germany, and its ‘middlestand’ companies who take pride, support and defend their manufacturing companies; they support the medium sized companies who provide the backbone of manufacturing and provide a steady stream of highly skilled workers through a vocational training system that it supported by government, employers and the unions.

These are companies who also work with unions and their employees to provide stability rather than attacking workers rights and rehashing the failed policies of the past.

“In government we must confront the old-fashioned, backward-looking, negative thinking which says that all government needs to do to generate growth is to cut workers’ rights, slash taxes on the rich and stroke fat cats until they purr with pleasure.”

Make no mistake, there is a long way to go – but New Labour’s policy of leaving it to the markets to sort out and dismissing manufacturing in favour of services and the finance sector has disappeared in the rear view mirror.