This month’s REC/KPMG Report on Jobs makes for moderately hopeful reading, but it is still far too early to call a labour market recovery, writes Richard Exell. 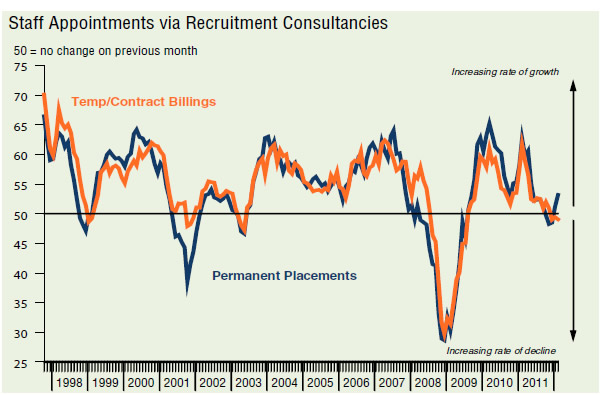 This month’s Report on Jobs (pdf) makes for moderately hopeful reading, but it is still far too early to call a labour market recovery.

This report, from the Recruitment and Employment Confederation (the trade body for employment agencies) is always worth paying attention to. It concentrates on what changes employment agencies have noticed from the previous month; this – and the fact that it comes out a week before the official employment figures – makes it a useful forward look.

REC members tend to be less likely to deal with the lower-paid end of the labour market, so the report (pdf) may not be telling you what prospects are going to be like for unemployed people, but if you remember that it can be very useful.

It isn’t just the matter of the fall in temporary placements – as Graph 1 shows, there’s also the fact something similar happened last year and then petered out.

The figures for job vacancies are also positive, with the seasonally adjusted REC Job Vacancy Index at 53.5, up from 52.3 last month (any figure above 50 indicates an increase in the number of vacancies).

But again, as Graph 2 shows, a look back over the past 15 years will stop us getting too excited. 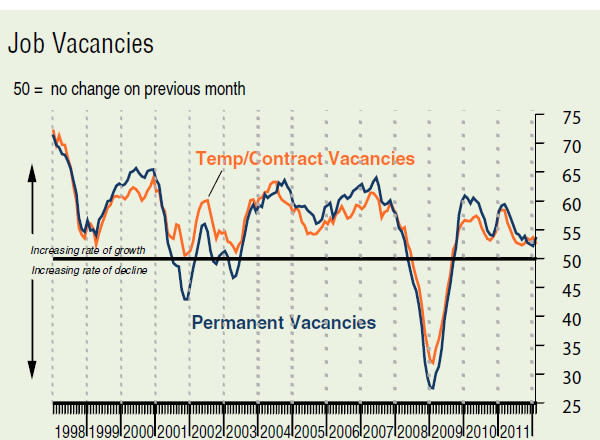 This might mean that there’s some tightening of a labour market that’s been very slack by historical standards – but you’d expect this to be reflected in pay, and there’s a bit of a conundrum here.

While the seasonally adjusted index for pay for temporary staff is positive (53.2) for permanent staff it is 48.7 – the first fall since October 2009. REC suggest “the price of permanent employment is lower take-home pay”, which is as good an explanation as any.

Markit, who produce the Report on Jobs for the REC, have also been producing some quite hopeful numbers in their Purchasing Managers Index surveys.

On Monday they published the PMI for service industries, which reported a second month of growth – though at a slower rate than in January – and last week the survey for construction was at its highest for 11 months. The PMI for manufacturing was down a bit from January, but still positive.

The Purchasing Managers Indices are another good set of forward-looking data, because purchasing managers tend to be the first to react to changes in the business climate. These figures are hard to read. They aren’t strong enough to outweigh the general lousiness of the most recent GDP figures (pdf), but they are all pointing in the right direction.

Labour market behaviour tends to follow GDP, rather than the other way round, but GDP often follows business confidence.

I’m inclined to think the nature of the REC’s membership may mean the report is a bit too optimistic if we’re interested in the labour market as a whole – the picture is likely to be a bit worse for jobs at the lower end. And remember that most public sector job cuts haven’t hit yet, but quite a few will come this year.

So my best guess is that we’re going to see the same pattern as last year – slow improvement that is cut off and followed by a significant rise in unemployment – but I wouldn’t bet the farm on it.

• Good news on jobs could be threatened by cuts – Richard Exell, December 8th 2010

16 Responses to “Encouraging news on jobs, but far too early to call a labour market recovery”