Fiona Ranford of UK Feminista writes about the exploitation and shocking mistreatment of women workers by Nike in the deeply sexist global economic system.

By Fiona Ranford of UK Feminista

Today women and men from UK Feminista took to the high street to protest against the exploitation uncovered in factories supplying Nike. 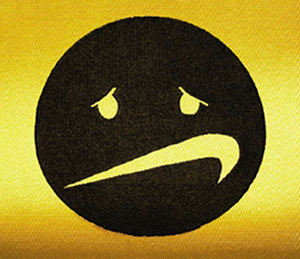 The actions, taking place outside Nike stores in London and Glasgow, will see campaigners “cheat” their way through a series of races and hold a medal ceremony where Nike will be awarded the title of “biggest cheat”.

The demonstrations are a response to new research (pdf) published by War on Want which has uncovered the systematic violations of workers’ rights in Bangladeshi factories supplying garments for Nike, Puma and Adidas.

Their findings, while depressingly familiar, are still shocking: all factories visited were illegally employing staff for more than 60 hours a week, and five of the six failed to pay the legal minimal wage.

But UK Feminista’s protest demands that we rethink Nike’s exploitative practices as an explicitly feminist issue.

Eighty five per cent of Bangladesh’s garment workers are women, and as such they experience distinct rights abuses as factory workers; 1 in 10 women workers are threatened with being made to undress, with 1 in 10 workers experiencing other sexual harassment.

Many are refused maternity rights or simply fired when discovered to be pregnant, an indication of the profound disregard by firms like Nike for women’s reproductive labour.

These statistics are enough to send any feminist out onto the street in protest. But an interrogation of the reasons why these low paid jobs are consistently filled by women reveals a web of structural and cultural relations of power that are built gender norms.

Women lack other employment opportunities due to poor access to education, and are affected by entrenched gender stereotypes around what constitutes ‘women’s work’. These include assumptions around their primary roles as carers rather than breadwinners, stereotyping women as supplementary earners and so excusing the payment of low wages.

In this way firms like Nike are able to profit from gender inequality through utilising a cheap, female labour force subsidised by stereotypes.

But should we be turning attention to women in Bangladesh at a time when life is so grim for women in the UK? The 2012 budget is set to hit women much harder than men by hacking away at the social services and benefits that women (particularly the poorest) rely on.

I would argue that we must keep our focus global, because the sexism underlying the labour market in Bangladesh, from which firms like Nike profit, is the same sexism that ensures George Osborne’s austerity measures will hit women hardest.

Assumptions about women’s roles as carers run right into the heart of the current global economic system. It is a system that relies on women’s unpaid caring labour, by seeking a society where government and corporations refuse responsibility for human need and the caring work it requires.

While Nike sources from factories that refuse to pay a living wage that can sustain life, and while they fire pregnant women, the UK government is demolishing the hard-won social services and benefits that recognise how society as a whole is responsible for caring labour, since society as a whole fundamentally relies on it.

The budget’s proposals to means test child benefit (not to mention Osborne’s vision of a deregulated labour market) are particularly stark rejections of responsibility for caring and reproductive labour. In both the UK and Bangladesh care is being shifted into the domestic sphere to be picked up by women.

Today’s protest is not asking for boycott. Neither does it aim to ladle guilt onto women as consumers over where they shop. Instead it is a protest in solidarity with garment workers in Bangladesh which aims to spotlight the how the ability of firms like Nike to reap huge profits relies on gender inequality and demand that Nike takes positive steps to end this.

And in highlighting Nike’s activities as a feminist issue, the protest is a call for more collective and transnational feminist action against a deeply sexist global economic system.

35 Responses to “Nike’s exploitation of female workers – sacked for being pregnant, abused at work…”