James Hallwood
5 March, 2012
A Britain We All Call Home 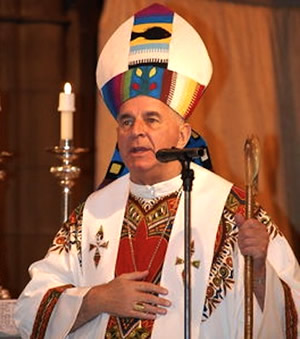 The leader of the Roman Catholic Church in Scotland has launched a bitter attack on the government’s plans to introduce full civil marriage rights for same-sex couples.

Cardinal Keith O’Brien claims such a move would “shame the United Kingdom in the eyes of the world” and compared it to the legalisation of slavery. Such provocative language is particularly unhelpful given the recent surge in anti-LGBT hate crime in Scotland, adding fuel to the fire of intolerance. His intervention is also entirely flawed, resting less on fact than age-old prejudice.

His claim that this ‘madness’ is unnecessary given the current legal equality of civil partnerships brushes past his earlier opposition to their introduction – going so far as to compare gay people to paedophiles at the time.

Ironically the representative of the most centrally controlled religion on earth went on to say that the laws banning LGBT discrimination at work and in public bodies were ‘totalitarian’.

Stating that this was an act by the government to re-define marriage completely O’Brien, like Archbishop of York (and Sun columnist) John Sentamu before him, misses the point that marriage is not solely a Christian concept but something that long predated the birth of Christ.

Even after the advent of Christianity civil marriage was widely recognised in Medieval England.

This legislation doesn’t seek to force religious marriage on churches, but merely allows civil partnerships the same status as heterosexual marriages that eschew a church wedding for a registry office or secular service.

The Quakers, one of Britain’s oldest continuous denominations, actively lobbied for gay marriage while the Methodists have called for a ‘pilgrimage of faith to combat repression and discrimination’.

This is not a Christian versus secular argument: the Unitarians supporting the right; the Metropolitan Community Church with its gay ministry; indeed even the inner wranglings of the Church of England and Church of Scotland are sign enough that Christianity is not united on this issue.

Furthermore, O’Brien’s bizarre claim that the ‘intolerance’ of equal marriage rights would shame us across the world deserves some scrutiny. I wonder which countries he believes would see us as shamed?

Overwhelmingly Catholic South America is experiencing a wave of legislative tolerance for LGBT communities, while the home of Christendom, Europe, increasingly polls in favour of equal gay rights. Even the historic defenders of Roman Catholicism, Spain and Austria, have introduced marriage and civil partnership rights respectively.

Meanwhile emerging powers like India and South Africa are making huge steps towards equality, the latter introducing full gay marriage in 2006. The battle isn’t over but much of the world seems to be going in the right direction, however slowly.

Perhaps the Cardinal fears us facing shame from Iran, a nation that routinely executes gay men, or Saudi Arabia, which does likewise using the euphemism ‘shameful situation’ to describe gay relationships.

He may garner support in Russia, a country infamous for the assaults on Pride marches now matched by a legislative programme that aims to repress LGBT rights, or Uganda where the anti-gay bill is resurrected, albeit without the inclusion of capital punishment; progress indeed…

The Cardinal may have some allies around the world, but they’re not the friends I would want to associate myself with. Indeed many of them repress religious minorities in a way that makes his claim that this is an assault on Christianity frankly laughable.

Unless he also plans to renew his attack on divorce rights I suggest the new law does no such thing as to “create a society which deliberately chooses to deprive a child of either a mother or a father”. Nor does it reflect the wishes of a ‘small minority of activists’ – when 61% of Scots support calls for full gay marriage.

What his provocative language does is incite the intolerant and at times violent minority to fight equality. Comparing a loving relationship affirmed in public to the legalisation of slavery would be hilarious if it weren’t so offensive to any number of groups. Bear in mind these words would have been read and re-read by countless press officers – he knew what he was saying and can’t be unaware of the potential consequences.

It would be too easy to launch a critique of the Roman Catholic Church’s position on homosexuality in the context of its own shameful history of child rape. But again, irony comes to the fore, when a church that has committed and covered-up so many shameful acts itself seeks to fight against the right for two people in love to wed using language that should be reserved for paedophiles alone.

The Cardinal is fighting a losing battle. Thirteen years of Labour social policy has changed even the official Conservative position on LGBT rights (if not all Tory MPs) and so much of the world seems to be moving, even if incrementally, in the right direction. Social attitudes amongst British youth are also seeing a radical shift but we can’t take these positive changes for granted.

Interventions like this risk inflaming societal intolerance and contributing to the already startlingly high self-harm and suicide rate amongst LGBT people in the UK, let alone the gay suicide epidemic in America. It may reflect an archaic opinion but it is no less dangerous.

A final irony is that on a personal level I agree with one of O’Brien’s fundamental points: I do see marriage as a ‘stabilising influence’ and a ‘worthwhile institution’ – I simply want the right to be able to marry a man with whom I can form a stable family unit, contributing to, not diminishing the institution.

I can promise him that if/when(!) that day comes I won’t be approaching a Roman Catholic church to perform the service.

33 Responses to “A history lesson for Cardinal Keith O’Brien”