For Labour, today, budget day, marks a challenge - namely to speed up the journey towards regaining credibility on the economy, writes Ed Jacobs.

With much of today’s focus on the government – and how much Lib Dem or Conservative influence has come to bear on the budget – for Labour, today marks a challenge, namely to speed up the journey towards regaining credibility on the economy. 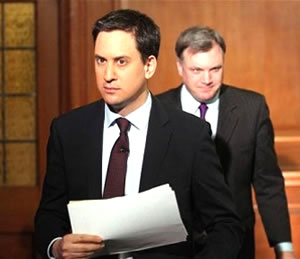 One look at YouGov’s most recent tracker poll (pdf) for the Sun sums up the mood of the country well – 49% feel the way the government is cutting spending is bad for the economy; 57% feel it is being done unfairly; 44% feel it is too deep; 47% feel the spending cuts are being made too quickly.

Under such circumstances, given the anger being felt towards the government’s deficit reduction strategy, an open goal should exist for a half decent opposition. For Labour, however, it seems increasingly difficult to hit the target.

The uncomfortable truth for the Labour Party is that though there is anger at the government’s strategy, in the same poll, 58% of respondents felt the spending cuts being presided over by Osborne were necessary. In other words, the medicine might not taste nice, but there is recognition that it is needed nonetheless.

More worryingly still, given it is the economy which constantly comes the top of voters’ priorities, just 26% of people supported Labour to make the right decisions to improve the economy compared with 32% who supported the coalition.

Polls come and go, and granted, this data is from just one, but looking back at other polling a clear pattern emerges: Labour is still not trusted to run the economy. Rightly or wrongly, that is the perception of the voters, and one which, until changed, will continue to hold the party back and prevent Ed Miliband gaining the keys to Downing Street.

At its heart has been Labour’s slowness and inability to address early on the views, crsystialied in the minds of many, that Ed Balls and Ed Miliband combined amount to “spend, spend” politicians opposing every spending cut whilst arguing they recognise spending cuts need to be made without providing any detail as to what they would cut – detail which is vital if Labour is to be taken seriously.

Just imagine where the party could have been if it had spent as much time crafting a clear economic message as opposed to deciding how Labour HQ should be organised.

Instead, we now have a Leader of the Opposition and a Shadow Chancellor the public don’t trust on the economy, and a “five-point plan” for the economy which appears meaningless to most voters, sounding less like a credible economic strategy and more like one of Stalin’s five-year plans for the economy.

For the past few months now, Labour have let the health and social care bill dominate all that they say and do. Don’t get me wrong, it is important stuff and I oppose the coalition’s plans tooth and nail. But the mere fact the Guardian’s ICM poll has shown the Tories now leading Labour outlines just now little benefit Miliband et al have derived from it.

Ed Miliband’s response to George Osborne’s third budget today provides an important opportunity for Labour to gain credibility. Whilst much of the heat of the debate will centre on attacking the government’s likely decision to lay out a plan to abolish the 50p rate of tax, for it to look and sound credible Labour will need to answer one simple question: what would it do if it gets re-elected at the next election. Bring the 50p rate back or not?

If Labour can provide a credible and clear answer to that question then the long road to a revival in Labour’s fortunes might be on the cards; if not, and I say this as someone who voted for Ed Miliband, the question for Labour MPs will be simple – can the current leadership ever deliver the economic credibility needed to win an election?

If not, tough decisions will need to be made.

15 Responses to “Budget 2012: Can Ed and Ed restore Labour’s credibility?”