Aside from the top decile, the poorest ten per cent will be hit the hardest by George Osborne’s budget, reports Shamik Das.

The “we’re all in it together” line was missing from today’s budget – and no wonder, when one looks at the distributional impact of George Osborne’s latest proposals and previous announcements.

As Chart B2 of the Budget 2012 Red book (pdf) shows, the cumulative effect of this budget and previous announcements is regressive for the bottom eight deciles. The ninth decile pay less proportionally than the poorest half of people. But the budget is progressive when looking at the richest 10 per cent versus the rest. 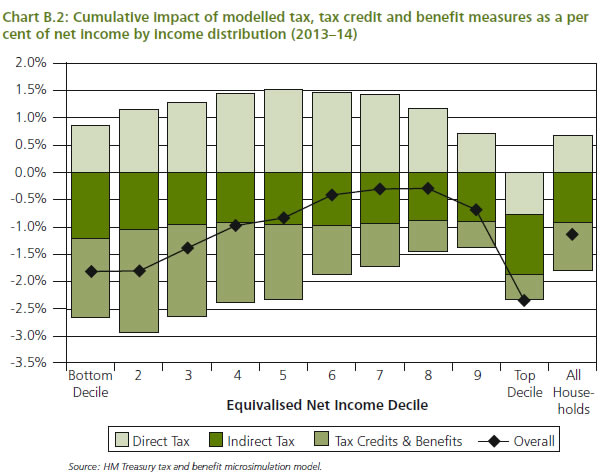 Up to eighth decile the richer you are, the less you’re impacted – with the ninth decile still paying less than the poorest 50 per cent. If this is Mr Osborne’s definition of a “fair” distribution of pain, we’d hate to see what he’d come up with if he sat down and really put his mind to penning an “unfair” budget…