Ed Jacobs reports on the solidification of the pro-union side in the Scottish referendum - and not a moment too soon, as Murdoch comes out batting for the nationalists 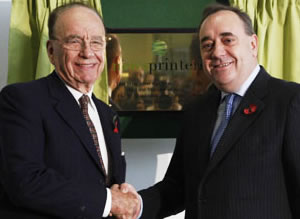 The SNP government have sought to distance themselves from suggestions that a referendum on independence has been pencilled in for Saturday October 18th 2014, following the revelation in the first edition of The Sun on Sunday over the weekend.

Seeking to distance ministers from the report, a spokesperson for the first minister is today quoted as saying that whilst the date is a “possibility” a final decision “remains to be taken”, with a pledge that the Scottish parliament will be told first as soon as the consultation on a referendum has closed.

The apparent leaking of a date to Rupert Murdoch’s new paper has however once again raised questions over relations between the SNP, and Alex Salmond in particular, with the media tycoon, at exactly the same time that deputy assistant commissioner Sue Akers yesterday told the Leveson inquiry that a “culture of illegal payments” to sources had developed at the paper.

It comes after a string of allegations over links between the Scottish government and Murdoch, with Scottish Labour last year having published 25 questions that the SNP needed to answer over the ties.

Likewise, having supported the SNP in last year’s elections to Holyrood, Murdoch himself has made clear his support for Salmond and the notion of Scotland going it alone in a series of tweets, among which was one declaring the SNP leader as “clearly most brilliant politician in UK.”

The date declared has however sparked a furious backlash for opponents who argue that a vote held during School holidays risks disenfranchising substantial numbers of voters. Outlining her concerns, Scottish Conservative Leader, Ruth Davidson has argued:

“In Alex Salmond’s rush to cosy up to Rupert Murdoch, he has chosen a date which threatens to disenfranchise a huge number of Scots. The SNP’s rationale for a Saturday is to boost turnout, but this date would result in the opposite.

“Why does Alex Salmond want to call a poll when many voters are away on holiday? It is simply not acceptable.”

In a similar vein, speaking following the announcement by Scotland’s second biggest company, energy firm SSE, that an independence referendum will increase the risk it attaches to investment projects, Scottish Labour leader Johann Lamont has declared:

“Coming just as Scotland’s second biggest company warns of the risk to investment, I do not understand the need for a three year delay.

“There is nothing that prevents the SNP holding this referendum now. We can’t afford to wait years to make this decision. Donald Dewar held a referendum within 134 days of coming to power, but it is going to take Alex Salmond seven and a half years.

Yet despite the heated backlash, the Scotsman has warned Salmond that currying favours from Murdoch might not necessarily reap the benefits he might be hoping. In an editorial, the paper concludes:

“Now we seem to know Alex Salmond’s preferred date for his independence referendum – 18 October, 2014. It happens to be a Saturday, the rationale being that it would make it easier for people to vote than if the poll was held on a traditional Thursday.

“There is nothing wrong with that. As this is such a momentous decision that Scots are being asked to take, it is only right that as many people as possible should be able to take part.

“Slightly odd is the choice of channel for dispensing this information – a leak to the new Sunday version of The Sun newspaper.

“Of course, since it has been unofficially leaked rather than officially announced, it makes it easier for the first minister to change the chosen date, should that prove necessary.

“Rather more interestingly than that, handing out goodies and titbits to people whom Mr Salmond wishes to woo is a well-tried tactic from the SNP repertoire of political techniques.

“Rupert Murdoch, the proprietor of The Sun and from whom all decisions about political positioning flow, could be described as a floating voter.

“The Sun has backed the SNP in the past, and sometimes it has not. And in recent months, Mr Murdoch has indicated his admiration for Mr Salmond’s political skills and some sympathy for the idea Scotland should be independent. So it is easy to see why Mr Salmond would want to curry favour with him.

“But the idea that this will pay huge dividends for the SNP is misleading.

“The influence that newspapers have over how their readers vote has dwindled in recent years. Mr Salmond should also be aware of the problems of getting too cosy with rich and opinionated businessmen – his one-time friend and admirer Donald Trump is now hurling abuse and promising to finance campaigns against wind farms.”

Meanwhile, the campaign to save the union finally seems to be taking shape, as the Scotsman today reports that Scottish Labour, Lib Dems and Conservatives have held discussions about forming a cross party campaign against independence.

It follows Johann Lamont’s acceptance during an interview with Holyrood magazine that the campaign would need to be cross-party in nature. As part of the effort, Labour MSP John Park has called on Gordon Brown to take an active part in the campaign. Park, who represents the same seat as the former prime minister in the Scottish parliament has argued:

“Gordon Brown increased Labour’s share of the vote in Scotland and is still popular. Gordon Brown is potentially more popular than Alex Salmond and he would make a key difference in the campaign.

“He’s one of the few prime ministers in recent history to have left office with his credibility enhanced because of the dignified way he left Downing Street during his last day there.

“The humility he showed means that a lot of people view him in a positive light and that’s why I hope he’s involved in the campaign.

“We have to get people like Gordon Brown, Alex Ferguson and Alistair Darling, together with those like Johann Lamont that can reach out to a broad range of different people across Scotland. It could be called a dream team.”