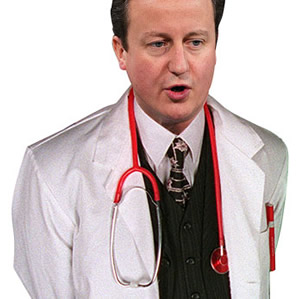 There was something depressingly familiar about the coverage this week of the government’s latest defeat to its controversial health and social care bill.

At its heart was an amendment which made explicit on the face of the bill that both mental and physical health should enjoy parity within the health system.

It was an important step, a moment that Peers recognised that mental ill health should no longer be treated as the hidden problem it once was, but be right at the heart of the health promotion agenda. Yet despite this, coverage on the amendment focussed not on the issue at stake, but about the political ramifications it had for the government.

When 1 in 4 people will suffer from a mental health problem, ranging from stress, anxiety and depression through to full blown psychophrenia mental ill health will at some point touch us all, be it suffering ourselves or having a friend or family member who suffers.

More startling still, the Prison Reform Trust has outlined that 72 per cent of males and 70 per cent of females sentenced to prison suffer from two or more mental health problems.

And the cost? On a crude, financial level, the Centre for Mental Health has put the figure in England alone at over £100 billion. But more seriously is the personal cost to those who suffer. Alistair Campbell for example, writing of his own depression has put it:

I had a pretty heavy nervous breakdown in 1986, and I’ve had depression on-and-off ever since. With the help of friends and family, sympathetic bosses, a good GP, a psychiatrist, sometimes medication, I have learned to manage it better than I did once.

At its worst, it is like an invisible dark force that first approaches, then envelops, then appears to fill every waking thought. You can escape via sleep, but you wake and find your eyes won’t open, you lack the energy to brush teeth, shave, speak, think anything other than thoughts of emptiness and despair.

When it’s bad, my partner Fiona says it is like living with somebody from a different planet. When you get into that mode it’s very dangerous and corrosive. People ask, “what’s wrong?” and you don’t really know. “What triggered it?” and you can’t answer that either. One thing you do know, there is no way you would wish to have it.

You would not wish to have it. It is that sentence that sums it up. It might not be seen by the naked eye in the same way an operation scar might be, it might be not be as visible as a plaster cast, but it is an illness every bit as serious as being physically ill. Any idea that anyone would want to feel that way is simply absurd.

Yet the sad truth is that the across all sections of society, the stigma remains, the attitude that mental ill health isn’t a real problem remains rife, putting fear into the hearts of those who suffer about coming forward to admit their sense of vulnerability.

Janet Street-Porter’s declaration in the Daily Mail in 2010 that depression was simply the new “trendy illness” and the media’s woeful lack of coverage of Andy Burnham’s important speech on mental health just a few weeks ago demonstrated both an ignorance and reluctance to discuss mental health problems across our mainstream media, a reluctance very rarely shown when discussing issues such as heart or cancer care.

Employers remain in a state of denial about the impact of mental ill health, with research published just before Christmas by the Chartered Institute for Personnel and Development showing that just 25 per cent of respondents to a survey said that their organisation encouraged staff to talk openly about mental health problems with only 37 per cent saying that their employer supports employees with mental health problems well.

“This research shows that there is still a long way to go until workers feel able to discuss their mental health openly in work, enabling them to get the support they need.

“With 1 in 4 people surveyed having experienced mental ill health, this is an issue that will touch almost every workplace in the country.

“Supporting staff through a difficult period does not have to cost the earth and can have huge benefits for any organisation.”

All this as stress in the work place continues to increase, with many now finding themselves competing with valued and close colleagues as they face the daunting prospect of having to re-apply for their jobs.

And across society as a whole, the stigma continues. Research points to a partner being four times more likely to leave someone because they have a mental health difficulty as compared to a physical disability. And 27 per cent of sufferers report facing discrimination, with one telling Mind:

“When I was a teenager, I spent time in a child psychiatric unit and when I came out, the kids near where I lived found out. Over the next few years, every time I left the house I would be attacked and have abuse shouted at me. As a result, I started to go out less and less. This led to over a decade of having no social life.”

And the result? A fear within those who suffer that telling other or seeking help will result in being misunderstood and stigmatised, could result in losing their jobs or face mockery and being the butt of jokes.

Sad though it sounds, it is a reality. As a society we need to establish a climate in which those who suffer have the confidence to admit their problem early on in the knowledge that admitting it, being upset, indeed crying, even for men, is a sign not of weakness but of strength, admitting that help is needed.

And at its heart there is an urgent need to halt those cuts which are serving only to embed mental health services as the Cinderella service. Predications last year pointed to over 50,000 mental health posts in the health service being shed, whilst the Independent, writing last year noted:

“Mental health services for society’s most vulnerable people are unfit for purpose, according to the findings of a damning independent inquiry published today.

“Seriously ill patients are subjected to assaults, taunts and overcrowding in over-stretched hospital wards where containment rather than recovery is the priority. Meanwhile, others on the verge of suicide or a manic breakdown cannot access help because crisis teams are too busy or closed outside office hours.

“A combination of rising demand and government cuts is leaving the services at breaking point in some areas.

“The year-long inquiry by the charity Mind found huge variations in the quality and availability of hospital and community crisis services across England and Wales. Evidence from 400 patients and staff found that innovative, humane and responsive services do exist, but only for a lucky minority.”

With economically turbulent times serving to drive up workplace and household stress, loneliness increasing and mental health services stretched to their limit, there has never been a more important time for society as a whole to send a clear message to those who suffer that there is no shame in suffering from mental ill health.

It is time therefore that all sections of society – patients, the medical profession, the media and the politicians form a commission to address once and for all how each can play their own important role in stamping the discrimination out once and for all.

As a society, it is imperative that we are judged by how we treat out most vulnerable. Never have those lines be as appropriate as they are today for the 25 per cent of us who at some stage will suffer from mental ill health.

• Don’t believe the spin – the health reforms are Cameron’s just as much as Lansley’s – Shamik Das, February 8th 2012