Kevin Meagher assesses where the Tories stand on renewable energy, in the wake of a letter signed by 101 Conservative MPs against wind farms 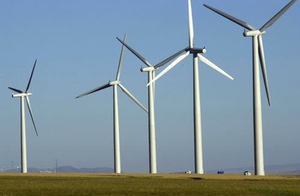 It took less than 24 hours from the resignation of Chris Huhne for the Tories to strike. A hundred and one Tory backbenchers have written to David Cameron calling for an end to public subsidies designed to support Britain’s wind power industry.

They claim that subsidies should be drastically cut and draft planning guidance strengthened to make it easier for objectors to block wind farm schemes.

The letter, organised by Daventry MP, Chris Heaton-Harris, says it is ‘unwise’ to support ‘inefficient and intermittent’ onshore wind power and the forthcoming National Planning Policy Framework (NPPF) should be beefed up to make it easier to oppose wind farm applications.

Quelle surprise! In the main, the Tories are a coalition of climate change sceptics – like former chancellor Nigel Lawson – and rural romantics who see a wind turbine on a hillside or stretch of coastal horizon as butchery of the landscape.

Despite the fact that 60 per cent of voters think it is ‘right’ to ‘subsidise wind farms to encourage more use of wind power’.

It certainly isn’t a rational belief about the efficacy and cost-effectiveness of wind power. Far from being ‘intermittent’ wind turbines operate between 70-80 per cent of the time, currently providing power for the equivalent of 3.3 million homes.

Indeed, as Conservative energy minister Charles Hendry has put it:

“Onshore wind is one of the most cost-effective and developed of all renewable technologies, and has almost zero marginal cost, because once the facilities have been constructed, the cost of the energy – the wind – comes without charge.”

One of the signatories to the backbench letter, West Suffolk’s Matthew Hancock – George Osborne’s former adviser in opposition – said:

“I support renewable energy but we need to do it in a way that gives the most value for money and that does not destroy our natural environment.”

Wind farms are not to everyone’s visual tastes, but to talk about them ‘destroying the environment’ is so far wide of the mark as to be laughable. By far the most commercially viable form of renewable energy, which can easily be scaled up, wind is vital to Britain’s strategic energy interests.

As Europe’s windiest country, with a suitable onshore topography and hundreds of miles of viable coastline, we would be looking a gift horse in the mouth by not cultivating a free, abundant and truly renewable natural resource.

Unfortunately the opposition of Conservative MPs is emotional and myopic. They elevate their aesthetic prejudices to a faux point of principle.

But writing on ConservativeHome yesterday, Tory MP Chris Pincher let the cat out of the bag:

“Ask an estate agent and they will tell you that a wind turbine application to the local planning committee can easily affect the value of homes in the immediate vicinity.“

Despite this rank nimbyism, the concept of having an ‘energy mix’ means there is a role for all forms of generation in meeting our demand for power. This alters given the availability, reliability and cost of a particular energy source as well as our carbon reduction obligations.

As energy regulator, Ofgem, noted recently, Britain faces ‘growing exposure’ to a volatile global gas market where ‘political instability in the Middle East and the impact of Fukushima have helped push up wholesale gas prices for this winter by 40 per cent’.

By turning their noses up at wind power Tory MPs serve to make us more reliant on nuclear and imported energy sources with all the associated price spikes and reliability problems. With the looming crisis in Iran and the continuing uncertainty in Russia and the Middle East, such a policy is an abdication of our national interest.

And also a snub to jobs. Our burgeoning wind power industry already employs 10,000 people at every level from apprentices to experienced engineers.

As Jennifer Webber from RenewableUK puts it:

“The number of jobs is expected to rise to 88,300 by 2021, including the many companies, large and small, involved in the supply chain.”

That is an eight-fold increase in jobs over the next decade.

Creditably, Laura Sands, Tory MP for South Thanet, took to the airwaves yesterday to counter her ill-informed colleagues, arguing that we need to ensure security of supply and limit our reliance on imported fuel in order to secure our future energy needs.

Along with Charles Hendry, she will find that being a Conservative MP with a serious, informed interest in our energy challenge is a lonely – and maddening – place to be.

Chris Huhne may have had his faults, but as energy secretary he managed to keep the crackpots and nimbys on the Tory backbenches at arm’s length. Let us hope his successor, Ed Davey, will do likewise.