Tony Burke writes about the calls from a leading German Trade Unionist to introduce a Robin Hood tax in Germany, and to deal with the discrepancy between taxes on earned and unearned income. 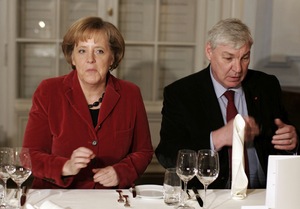 The German trade union movement has demanded that Germany’s richest citizens help with the countries debt crisis and tax burden which is now falling on working people.

At a recent joint press conference with chancellor Angela Merkel, Michael Sommer, the president of the powerful German Confederation of Trade Unions (Deutscher Gewerkschaftsbund – aka DGB) demanded a greater financial contribution from Germany’s rich and the tax burden to be increased on the countries wealthy.

The German economy minister Phillip Rösler is expected to revise growth estimates for 2012 in January from the official forecast for growth of one per cent for 2012.

Wolfgang Franz, the head of a panel of government economic advisers, said he expected growth of about 0.5 per cent next year, half the earlier prediction. “But I do not fear a recession – certainly not one as strong as in 2009 when GDP shrank by about five per cent,” Franz said.

In addition Angela Merkel hinted that she may re-introduce short time working subsidies in 2012 to help manufacturing industry. However, German car makers BMW, Daimler and Audi asked workers to cut short their holidays because of full order books and the German Electrical and Electronic Manufacturers’ Association said it expected growth of five per cent and sales amounting to €190 billion.

It is against this background that German unions continue to put pressure on their government to introduce more financial measures including a new stimulus package to help boost the economy.

At the height of the economic crisis in 2009 the DGB called for the introduction of a financial transaction tax (Robin Hood tax) and Sommer once again urged Merkel to introduce the tax arguing that a stock market sales tax, levied on the sale of shares and derivatives, could be introduced as a curb on high risk speculation and would also generate increased revenue for the state.

Sommer told Merkel that the tax would affect only financial speculators, given that the more an investor buys or sells stocks and shares, the more tax they would then have to pay whilst long-term investors, who provide stability to the German economy, would only feel a limited effect of the tax.

DGB calculations show that imposing a tax rate of 0.1 per cent on all transactions conducted on the stock market could generate as much as €13.5 billion a year for the German government.

Arguing that the current financial and economic crisis is not primarily a debt crisis, but a crisis of state revenues, Sommer said that it was no wonder that the state lacks money – given the successive tax cuts that have been introduced over the course of the past 10 to 15 years.

According to Sommer, if the year 2000 tax laws were still in operation in Germany, then the state would have additional revenues this year of around €50 billion and there would be no new debt today.

Sommer also argued for the introduction of a wealth tax on the rich and for an increase in inheritance tax in Germany. He challenged the current situation in Germany, where well-paid employees pay significant amounts in income tax, while individuals that do not work and live on income derived from capital pay only 25 per cent tax.

He called for the abolition of that special rate, or for a dramatic increase in the existing withholding tax rate (the amount of tax retained directly by the employer or by the bank before the earnings are paid out). Sommer said that the 32 per cent rate proposed by the German Social Democrats (SPD) was “a first step in the right direction”.

It will be interesting to see if the continuing pressure from the DGB and Germany’s manufacturing and service based unions such as IG Metal, Ver.di and the Chemical workers union IGBCE can ensure that the German government leads the field in Europe by introducing a financial transactions tax.

• Osborne starts to panic about the chance of a Robin Hood Tax – Owen Tudor, November 9th 2011

• Osborne in public: “I am not against Tobin taxes”; in private: “He remains unconvinced” – Alex Hern, November 9th 2011

26 Responses to “Robin Hood Tax gains momentum – on the continent”