Cormac Hollingworth explains to George Osborne how rising unemployment and recession are increasing the deficit, and how jobs and growth will cut it. Simples. 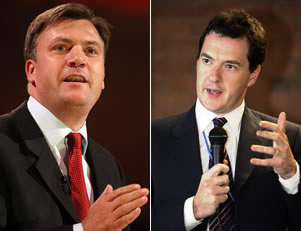 Rising unemployment and recession are increasing the deficit. In the fiscal year 2011-12 the government’s policy measures of £19 billion have only cut the deficit by £ 9 billion. Ed Balls has been arguing a very simple point that government action to reverse the slump would reduce the deficit.

Here we present Left Foot Forward’s own research that shows Labour’s five-point plan would cut the deficit by £16 billion.

Within a football idiom government spending is equivalent to the decision of the football board on how much to allow the manager to spend on players. And just like a government, the club’s borrowing is only revealed at the end of the season because club revenues are gathered during the course of the year.

Whether the club qualified for a European place, whether it got relegated to a lower division… it’s only then that the club’s borrowing will be revealed.

So perhaps it’s helpful to describe the argument between George Osborne and Mr Balls in this way:

“George Osborne, as chair of the current board, told the club manager at the start of the season ‘there’s no money to be put into buying players for the team, but as a result of this prudence, the club will break even at the end of the season’.

“Unfortunately the lack of investment is now showing, and the club is currently languishing at the bottom of the table, and the pundits are expecting the club to end the season with a balanced book.

“As a result, Ed Balls, another board member, speaks up arguing the club needs to spend in the mid-season transfer window, because good players will allow the club to finish higher in the table.

“‘It’s only through spending in the mid-season transfer window that the club can have the players to perform well enough to break even,’ says Ed Balls (if only Ed Balls could convince the terraces that there was some hope)…” (etc.)

With their football team languishing at the bottom of the league, there are few football fans that don’t want their board to allow the manager to invest in the team.

Fans don’t believe this spending must lead to wasteful borrowing. On the contrary, they believe spending is the best chance the club has of not going bust. So it is with government spending.

While of course Mr Osborne will say Labour’s five-point plan for increasing spending would increase the deficit, that’s because he is not taking into account the effect on growth on decreasing the deficit, which is what we’ve calculated here.

How government spending affects growth is what economists call the multiplier, and the OBR gave us their estimate (in Table C8 below) of what the multipliers are for various policies in the June 2010 commentary.

“If the fiscal multiplier is 0.5, we’re getting the government project for half price: the government draws half its resources away from private sector activity but other half is just soaking up the slack.”

How growth affects borrowing is a little harder, however we’ve been drawing graphs for the past six months. Left Foot Forward, illustrating how growth and borrowing interact (as revealed by the OBR’s Treasury model), and the slope of that relationship between the two gives us the effect. It turns out that an increase in growth of 1.5 percentage points decreases borrowing by 1 percentage point.

Labour’s five-point plan has two large expenditure items, a VAT cut and infrastructure expenditure. The IPPR thinks it’s possible for the UK government to spend £10 billion on infrastructure, so this is the number we’ve used. The VAT cut is estimated to cost £12bn.  he spending cost of these policies is therefore £22bn.

However by the end of the parliament, GDP will be four percentage points higher, and unemployment two percentage points lower (Okun’s law) and together increases receipts and reduces welfare spending by £38 billion. Putting these together, spending £22 billion reduces borrowing by £16 billion.

Within our core simulation, the effect of the stimulus from Labour’s five-point plan is only to increase 2012 growth (by 0.7% we calculated above to 1.4%) and then this stimulus guarantees the OBR’s forecasted growth is achieved for 2013, and 2014.

In particular, the merit of the VAT cut, while having a much lower multiplier effect on growth is that, as it did in 2008/9, it puts desperately needed cash in the hands of small businesses so they don’t go bust.

However, as we saw with the ITEM-club downgrade to growth yesterday, if the economy continues on the austerity policy without a stimulus for the rest of 2012 we can’t avoid a second dip, and so our austerity forecast is to follow Standard Chartered’s growth prediction for 2012 of a recessionary -1.3%, and the shock means growth in 2013 and 2014 is reduced to the lowest forecasts for growth over the life of this parliament from the Treasury collection of economic forecasts.

The two forecasts are shown in Chart 1 below and the OBR’s current forecast is shown for comparison.

Labour’s five-point plan should be implemented in 2012 because UK output would be four percentage points higher in 2015, which lowers unemployment by two percentage points, but most importantly lowers borrowing by £16 billion.

So the next time a Liberal Democrat tells you Ed Balls would increase spending by £22 billion, you can calmly look them in the eye and say “yes, and it would also cut the deficit by £16 billion”.

34 Responses to “Memo to Osborne: Jobs and growth will cut the deficit. Please listen”