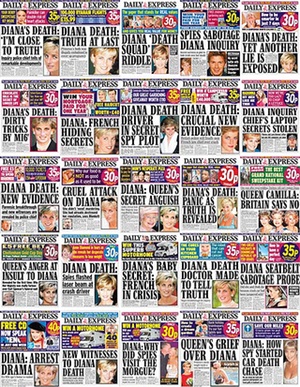 Richard Desmond, the owner of the Daily Star and Daily Express, came out fighting at the Leveson inquiry today, and as ever, it was popcorn viewing.

When asked whether he considered his papers to be ethical, Desmond responded:

When pressed, he explained that:

We don’t talk about ethics or morals because it’s a very fine line, and everyone’s ethics are different.

For the first half of his testimony, Desmond was mostly talking about his papers from a business point of view. When the discussion turned to his purchase of the papers, however, things got personal.

He says that when he bought Express Newspapers:

We were vilified, we were pilloried, we were attacked – the only thing I wasn’t accused of is murder…

The Mail were the worst, because they were upset that they hadn’t bought the Daily Express…

Without a trace of self-awareness, he concluded his train of thought by saying:

I think it’s Britain’s worst enemy, the Daily Mail. Their tone on everything is so negative.

Asked about Express Newspapers withdrawal from the PCC, Desmond explained his antipathy to the organisation:

Strangely, Desmond did not corroborate his editors claim that they left the PCC because it had failed to stop them lying.

Desmond’s witness statement (pdf) elaborates on some of his claims. On ethics:

22. I think that we are in a business to give readers/viewers what they want to read and watch and as long as it is legal that is what we aim to do. We do not talk about ethics or morals because it is a very fine line and everybody’s ethics are different. However, we do of course care about the title’s reputation and so we would not run a story if we thought it would damage that or seriously affect someone’s life.

On the editors’ code of practice:

I am aware that there is an Editors’ Code of Practice but I cannot say that I have read it or know the ins and outs of it. I do not consider that this is something which I need to know.

20. The responsibility for checking the sources of information lies with the Editors in consultation, if necessary, with the legal team. The Editors no doubt ensure that their reporters satisfy them of the sources. This is not something that I am involved in. I will only get involved where I can add value.

Finally, back in the room, Desmond when he does believe he can add value to the editorial process:

Sometimes I tell them to change the colour of the top. I say, ‘it could be brighter.’

• Express editor: We left PCC because it failed to stop us lying –  Shamik Das, January 12th 2012